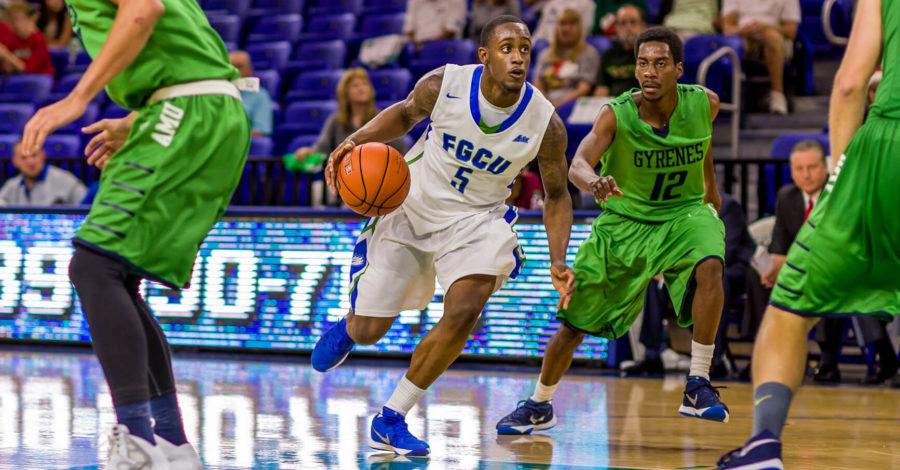 Last year, FGCU had a difficult time against local opponent Ave Maria. The overlooked school down the road had given the team a difficult game, something Southwest Florida was not expecting.
This year, the Eagles started the bus early for the Ave Maria Gyrenes, defeating them 91-34. The Eagles shot an outstanding 51.5 percent. The 57-point margin is the largest the school has seen since its 2002-03 season.
The bank opened early for FGCU sharp shooters on the offense-loving roster. Players were given the green light to shoot from all over the floor near and deep.
Sophomore Christian Terrell led the Eagles with 24 points during his 25 minutes of play, setting a career record for himself. His act was followed by freshman Kevin Mickle with 12 points during Sunday evening’s game.
Julian Debose did not suit up for Sunday’s landslide, on account of a recent ankle injury. Aside from Debose, the entire roster saw multiple minutes during Sunday’s game, allowing the mostly new team to work on its floor chemistry.
Highly anticipated rookie Rayjon Tucker racked up nine rebounds, five of which were on the offensive end.
The teams easy win will be one for the books, as they look forward Wednesday’s difficult opponent, Texas A&M. The Aggies are nationally ranked and recently took down No. 10 Gonzaga. With six freshmen on the team, Texas shares the young age factor with FGCU.