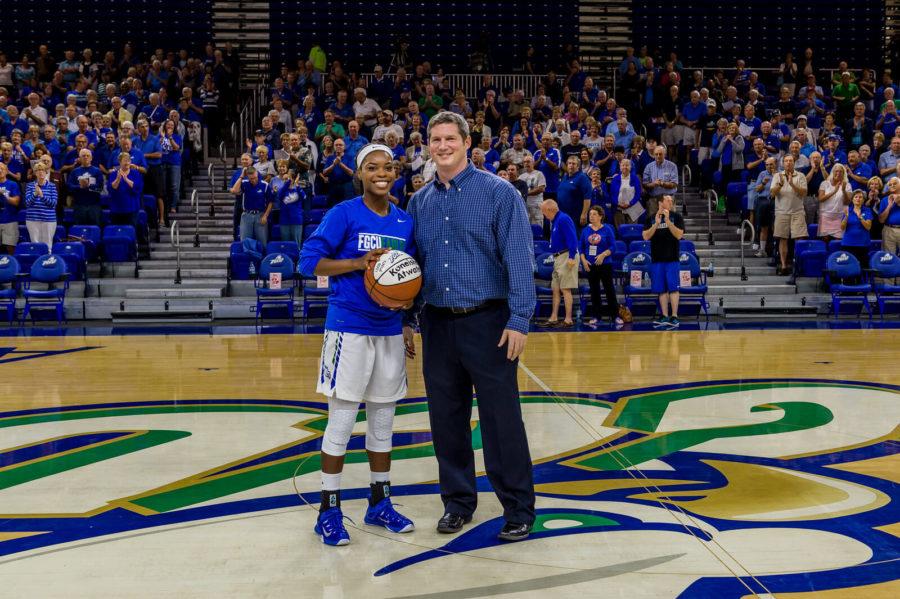 Everyone has a different story about what his or her life was like at 18 years old. For Kaneisha Atwater, her story continues to follow her.
Last week, in a Monday evening away game against FIU, single mother and star point guard Atwater scored her 1,000th career point. With Whitney Knight out with an injury, Atwater has stepped up to lead the team in all aspects.
Atwater scored 186 points during her freshman year at Virginia Commonwealth. In her sophomore year and first year at FGCU, she scored 261 points. Her junior year added a substantial 482 points to the books.
Her mark of 822 points and counting at FGCU during her three seasons ranks 11th all-time in the FGCU record books, just 17 points behind current assistant Chelsea Lyles.
Before her days at FGCU, Atwater earned a scholarship to Old Dominion University. She had a big decision to make in her life and basketball career for the next nine months.
“I was committed to Old Dominion University at the end of my senior year, and two weeks away from getting on a plane to attend Old Dominion, I found out I was pregnant,” Atwater said.  “I went home and discussed it with my family and decided to keep Andarious. Basically, I didn’t think I would play basketball anymore.”
Atwater’s son, Andarious Jerome Fulton was born Dec. 31, 2011, and a few days later, she received a call asking if she was still interested in playing basketball. She was offered an opportunity to play again at Virginia Commonwealth.
Before continuing her passion at VCU, Atwater was named to the 35th annual Parade All- America High School Girls Basketball team, the first–ever by a   VCU recruit. As a freshman, she started 12 of the 30 games she played at VCU. Earning the Newcomer of the Year, Atwater then transferred to FGCU. She started 31 of the 33 games she played her sophomore year at FGCU.
By her junior year, she was named to the Atlantic Sun Conference All-Conference First Team and earned a position on the A-Sun Championship All-Tournament Team.
As her career grows, so does her little boy, who is now her biggest fan. “Seeing my son in the stands makes me more aggressive and want to achieve more,” Atwater said.
Along the way, Atwater and her son have faced many challenges. During her freshman year, Atwater barely saw her son. “When I came home for Christmas he didn’t know who I was because I hadn’t seen him in two or three months,” Atwater said. “It was very difficult for me to be a mother and my son not know who I am.”
Making a tough decision and moving back home to Fort Pierce put Atwater on FGCU’s radar. Not too long after the Eagles contacted Atwater through Facebook about a position on the team, Karl Smesko, FGCU’s women’s basketball coach, offered Atwater a place to go to school and a team to be part of that was close enough to where she can see her son every weekend.
Due to her transfer, Atwater was going to have to sit out a year before being able to play as an Eagle. Smesko didn’t like that.
“Smesko told me that we might have a shot of you playing this year. I was like, ‘How are we going to do that?’ He told me that we have to do a waiver and get it to the NCAA.”
Atwater took charge and began writing letters, getting explanations from her coach at VCU and a guidance counselor from her high school about what she experienced.
“They denied at first, but Smesko and I didn’t give up and appealed,” Atwater said. “They found another player that had gone through the same things having a boy, so they accepted the appeal, and I could start playing right away.”
Smesko has worked with a young mother who was also a basketball player and successfully helped her find balance between her life, motherhood and her career. So with confidence due to experience, Smesko knew he could find the same balance for Atwater.
Atwater continues her career at FGCU and continues to grow as a mother and as a player. It is clear to see that she plays with a heart full of both love for the game and love for her son. As one of her tattoos says, “Life is a beautiful struggle,” and Atwater is living proof.