FGCU Dunk City freshmen class not what was expected 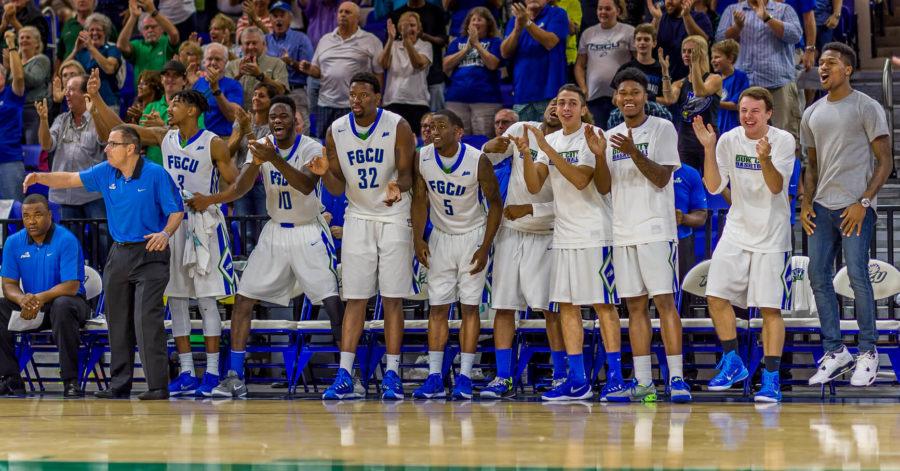 When Dunk City fans caught wind of FGCU’s freshman Rayjon Tucker, the “USA Today” No. 1 sleeper and highest recruit the university has ever gotten, the excitement was unreal. People talked about what he could do for the team and how he was going to put the dunk back into Dunk City.
I was expecting Tucker to be the big fish in a little pond, out playing opponents and teammates from the get-go.
Maybe, it was my own ignorance, but so far this year, the rookie hasn’t stood out to the expectation I, or many fellow Dunk City fans, had expected. Instead, freshmen Reggie Reid and Zach Johnson have stepped up to the occasion and caught some serious attention.
Comparatively, the freshmen all compete for playing time and receive a good amount. So far this year, Tucker has racked 134 minutes of playing time out of the team’s seven total games. Reid has seen 131 minutes on the floor, while Johnson, who has seen the most minutes out of the freshmen, has gotten 155 minutes of playing time.
Reid and Johnson compete for a starting position, and you can tell they’re constantly looking to outplay each other for that position. Their healthy competition is pushing them to constantly improve as point guards and all around players. They’re ball handling skills have improved even in the short few weeks the team has been playing and their decision making improves with better shots taken and passes made. Their chemistry, along with the rest of the teams, is different from years past.
Past point guard standout Brett Comer looked for the shot before the pass, something the freshmen don’t do. I respect the players willing to give up their shot to pass and give a teammate one better. This year’s team is selfless. Each game has a rotating set of leaders and standouts.
Tucker has been very solid on the board, regularly pulling down a good amount of rebounds on both ends of the floor. However, these rebounds are usually balanced with turnovers or missed layups.
Tucker has not yet proven to be the standout that Dunk City had thought. I hope he is still adjusting to Division I college ball and that he will prove vital in post-season play.