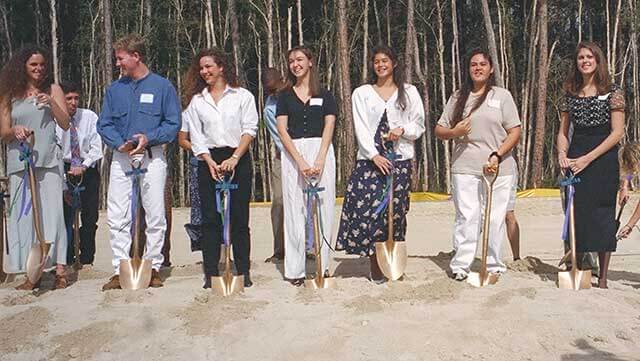 Despite the sounds of bulldozers, speeches and applause that kicked off the Nov. 28, 1985, groundbreaking of what would become FGCU, the 20th anniversary of that groundbreaking passed quietly.
To mark the anniversary, 675 containers of soil from the university were sent to community members who have made major donations to FGCU.
The university is saving its biggest plans for the 20th anniversary of its opening, which will take place Aug. 25, 2017. FGCU Chief of Staff Susan Evans said a team of staff, faculty and students is working on plans to celebrate that anniversary in a way to “highlight FGCU’s many accomplishments and our positive impact on the region and state.”
Since it opened its doors in 1997, FGCU has had three presidents and three interim presidents.
President Wilson Bradshaw will retire June 30, 2017, just two months short of the 20th anniversary.
FGCU has had music students play at Carnegie Hall as individuals and groups, has made 21 NCAA appearances and has graduated more than 22,000 students.
By 2017, the university aims to be complete with a $100 million fundraiser, but Evans is also expecting a 2 to 3 percent increase in students every year.
“The academic profile of the student body is maturing,” Evans said, “with our entering freshmen now holding higher test scores and high school grade-point averages.”
Evans, who has been an FGCU employee since 1993, feels positive about both the future of FGCU and the 20th anniversary.
“It will be a year of celebration leading up to August 2017 that will focus not only on where we have been as an institution but also where we are going into a bright FGCU future,” Evans said.