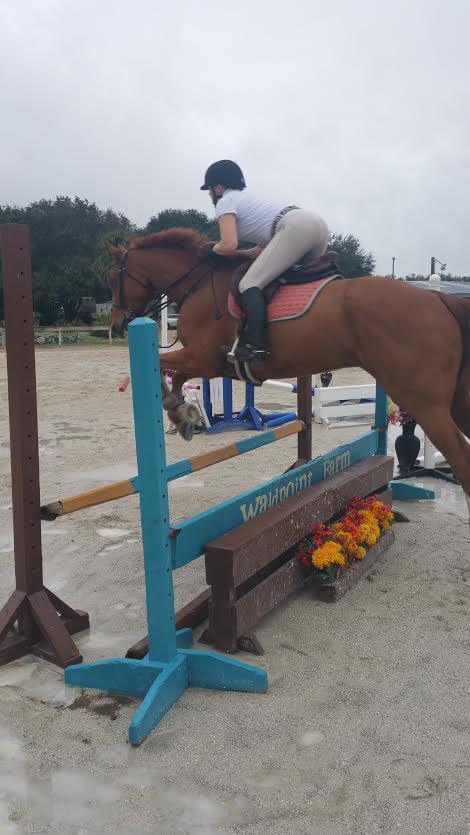 The horse track was muddy, and the puddles were deep. There was a light sprinkle, but it had been raining for days; there was the smell of barnyard throughout the track. The only noises were that of horses neighing and stamping and a horse trainer giving out instructions.
The horse that Heather Slayton rode was finding difficulties to trod and jump due to the puddles. As stubborn as the horse was on this rainy day, Slayton still managed to maneuver the horse. Slayton usually trains a couple times a week at Waldpoint Farm, in North Fort Myers, during good and bad conditions.
Heather Slayton is the president of the FGCU Equestrian Club.
Slayton grew up in Tampa with parents that inspired her. Her mother was strict on grades, and her father pushed her into sports. He coached her in softball.
“They just kind of pushed me to do my best in everything I could,” Slayton said.
Slayton has a little brother. In age, they are not far apart. He is 18 months younger than she is. Slayton is 21 and her brother is 20. He attends Ohio State University.
“When growing up, I would learn something, and he’d sit there and learn it,” Slayton said.  “He is ridiculously smart.”
In youth, Heather’s hobbies were mainly sports. She played softball, basketball and rode horses. The high school she attended was a private Christian school. In her junior year of high school, Slayton tore her ACL, and that ended her softball career. She had offers for softball from different colleges.
Slayton has a love for animals. As a child, she wanted to be a veterinarian but found out that schooling for that would be too much. She had dogs, cats and horses. At the moment, she has a horse in Tampa that she grew up with. She has done many shows with him.
“He is like my first horse, taught me everything,” Slayton said. “He basically made me who I am. He is the best thing to happen to me.”
Slayton found out about FGCU by luck. She was doing a horse show in Venice, Florida, so she had to find a way to request a day off school. The only way to get a day off from her high school was to tour a college. The closest university was FGCU. Slayton toured campus with no intentions of attending.
“Fell in love with the campus, fell in love with the dorms,” Slayton said. “I ended up filling an application out a week later and got accepted.”
While attending FGCU, Slayton has fallen in love with the community and the humbleness of the school. She is majoring in communications with a marketing minor. The broadness of a communications degree was what attracted her to it.
“I like the fact that there are small classes,” Slayton said. “I like the fact that I don’t feel like one in a million, that my teachers know me by name.”
Slayton’s stress reliever from school is horse riding. That is why she joined the FGCU Equestrian Club. They go around the state doing shows. The team shows off its talent by how well the riders can maneuver their horses and by doing tricks for the judges. To make it fair and competitive, the riders pick different horses out of a draw. They can’t use their own horse at shows.
“It makes you a better rider,” Slayton said. “It makes you more able to be able to ride other horses.”
Trust is another factor involved in horse riding.
“Trust is everything with these horses,” Slayton said. “If you don’t have trust and you hold them back, you’re going to affect your ride a lot. You have to trust them.”
Roger Seitzmeir, the coach of the FGCU equestrian Club, has 28 years of experience. He has been coaching the equestrian team for three years. He thinks highly of Slayton.
“She’s great,” Seitzmeir said. “She is a great president for the team. She works really hard. She is a good rider and very good at the horse shows. She is a very good leader.”
Slayton’s biggest accomplishment with her horse was the last show they went to. She and her horse made it to reserve champions. It was her best show ever. She was stress free and just had fun.
At this point in time, Slayton has reached all her previous goals she set for herself. She has graduated high school, and now she goes to college. But, there are still more goals to set and accomplish.
“My new goal is to be successful in whatever I am doing outside of college,” Slayton said. “That is basically where I am at right now to figure out what I am doing with the rest of my life.”