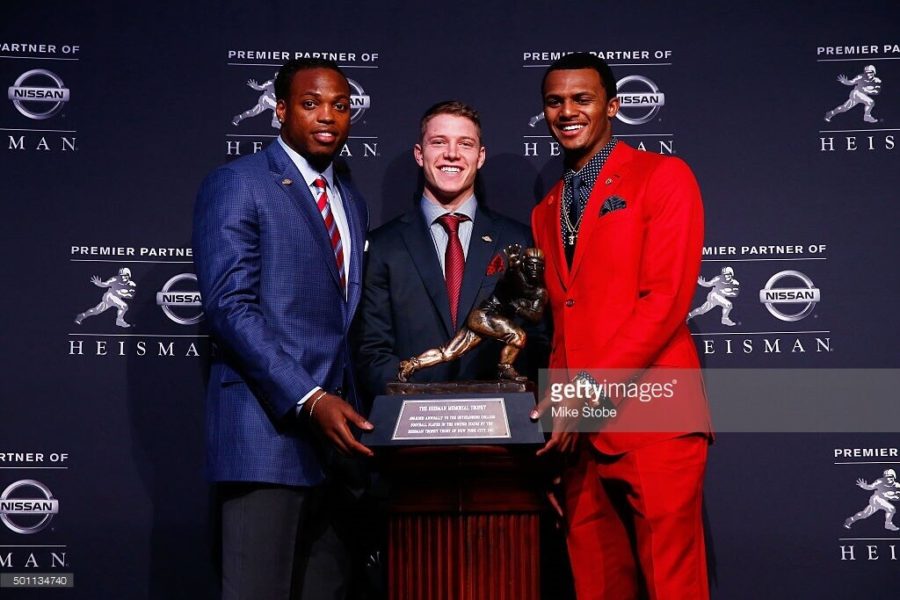 NEW YORK, NY - DECEMBER 13: The Heisman Trophy sits on a stand before a press conference at the New York Marriott Marquis on December 13, 2014 in New York City. (Photo by Alex Goodlett/Getty Images)

The 81st Heisman winner was announced on Dec. 12. And, regardless of who you happen to be cheering for, the winner should come as no surprise. With a record breaking 1,986 rushing yards, surpassing SEC greats Herschel Walker and Bo Jackson, Derrick Henry, a running back for the University of Alabama was the obvious choice this season.
Henry was awarded the Heisman Trophy Saturday night.
The 6-foot-3, 242-pound running back is only the second running back since 2000 to receive this prestigious award, the second being Mark Ingram, who also played for the Crimson Tide. This is a well-deserved win for Henry, seeing as he has accounted for 38 percent of Alabama’s offense this season.
It’s easy for the other nominees to put up big numbers, playing in the Pac 12 and ACC. But, Henry had to face off with some of the top defenses in the nation, playing for Alabama, which  had the toughest strength of schedule coming into the 2015 season.


Christian McCaffrey, a running back for Stanford, was great competition; however, he trailed Henry by 293 votes, making this the closest race since 2009 when Ingram beat out another Stanford alumnus, Toby Gerhart.
Henry won five out of six voting regions, with McCaffrey winning one, the Far West region, where Stanford is also located.
The Crimson Tide is no stranger to receiving acknowledgment for its program. Packed with powerhouse athletes, head coach Nick Saban has led this football program to four SEC titles, three national titles and two Heismans during the course of his career at Alabama. With one more season of eligibility left and the Cotton Bowl on Dec. 31 approaching, it will be exciting to see how much more Henry can accomplish along with his team.
Whether you bleed blue and orange or find yourself doing the “tomahawk chop” during a football game, it’s hard not to say “Roll Tide” for the newest Heisman winner if you are a lover of football and incredible athletes.
Delete Image
Align Left
Align Center
Align Right
Align Left
Align Center
Delete Heading