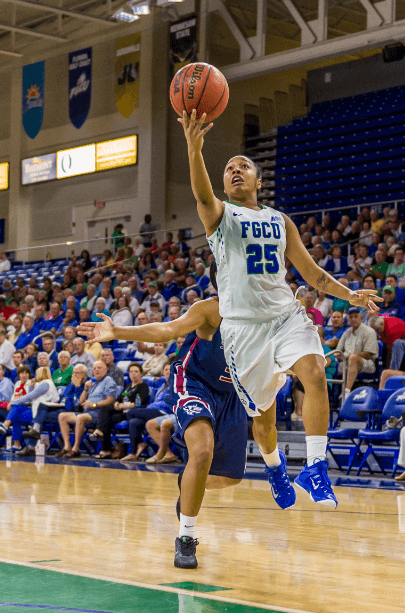 Haley Laughter gave the performance of her career in front of a home crowd in Tuesday night’s 86-33 win over St. Thomas University.
The redshirt sophomore, who has been making an important impact this season led the floor with a career-high 25 points, seven more than her previous career-high against Akron last month. Laughter shot a commanding seven for nine from the three-point line Tuesday night, opening up the first and second half with two deep three-pointers.
“Lately, a lot of us have been shooting the ball pretty well,” Laughter said. “We talked before the game about a couple of goals that we had and some shooting techniques. Tonight was a good night.”
Laughter’s seven three-pointers in a single game finishes just one shy of the program record held by Kelsey Jacobson, who shot eight three-pointers twice in 2012. Betsey Adams (2012-13) is the only other D-I player for FGCU to hit seven in a single game.
“Haley’s worked hard on her shot,” Smesko said. “She’s spend the past couple years really working on her form, and I can tell she feels really good about it.”
Laughter’s performance, along with Georgia transfer Sydnei McCaskill, who made her Alico Arena debut against the Bobcats Tuesday night, and redshirt freshman Taylor Goodall helped FGCU extend to a four-game win streak. All three players earned a career-high in points against the Bobcats.
McCaskill, landing two three-pointers for her first buckets with the Eagles, finished the game with 16 points. The five-foot-seven-inch redshirt junior shot three for five from the three-point line and four for six from field goal range during her 22 minutes on the court.
“We definitely wanted to give Sid some extended minutes tonight, which we were able to do,” Smesko said. “She had a really nice game for us.”
The transfer from Georgia became eligible on Saturday to begin playing for the Eagles after sitting out for two semesters. The top-100 recruited guard played 10 minutes Saturday, earning three rebounds.
“I think, away at Providence, I was a little more nervous, but playing at home with the fans, I was more confident,” McCaskill said.  “After the first one went in, I was like, ‘OK, I could shoot again.’ Then, it went in again.”
Redshirt freshman Tayler Goodall also scored a career-high 13 points during her 22 minutes of action Tuesday night, tying with STU’s Supavadee Kunchuan for third highest on the court.
“We’ve played a lot of games where she hasn’t been able to get a lot of minutes,” Smesko said. “Just to be out there for a long time, I think she got a little bit of confidence being out there and performing well.”
Taylor Gradinjan also led the floor with 10 rebounds.
Tuesday’s 53-point win over St. Thomas is FGCU’s biggest win since the 2012 season opener against Warner where the Eagles claimed a 69-point win over the Warner Royals. The win pushes FGCU to a 7-3 record this season.
This weekend, the Eagles will travel to Puerto Rico to take on Mississippi State, Arizona and Western Michigan in the Puerto Rico Classic.