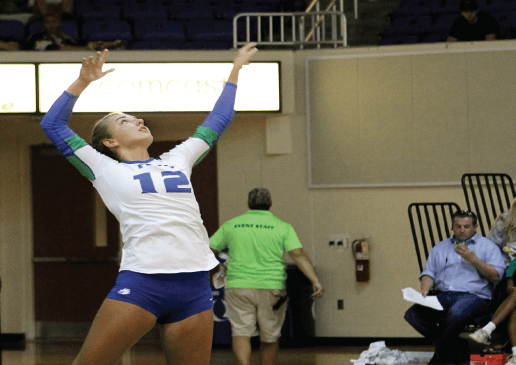 Originally coming to FGCU to keep her toes in the
sand, 5-foot-8 freshman Caroline Jordan got news
over the summer that beach wasn’t going to be the
only place she would be playing volleyball. After she
committed to play beach volleyball for the Eagles,
there was then talk from the coaching staff over the
summer of 2013 for Jordan to play on the indoor team.
Jordan’s interest in FGCU came from her interest in
wanting to join a new sand program, “It was one of
the few schools that was starting sand teams, which
was something I was really interested in and it was
a smaller D1 school. It was a good fit for me, so with
sand volleyball on top of that and being in Florida, it
was just the perfect fit.”
In the average, everyday world being 5-8 is
considered really tall for a woman, but in the
volleyball world it is completely opposite. On most
volleyball teams, athletes are between 5-10 and 6-2.
That extra two inches that Jordan was lacking never
stopped her, though. Playing on two of the best indoor
club teams in the nation, Orlando Volleyball Academy
and Top Select, Jordan was taught from an early age
that her height wasn’t going to get in the way from
racking up the same amount of points that the taller
girls easily got.
“I was trained really well by my coach club at Top
Select, and he taught me how to hit shots. He taught
me that even though I’m short I can score points and
get kills just by where I can place the ball. It’s nice for
beach, because you need those kills when you only
have two people playing.”
When coaches are looking at athletes to recruit for
their team, a lot of the time a player who has focused
on playing one position since they were young will get
moved around on the court to play a different position.
Since Jordan was an outside hitter for all of her high
school and club career, that was a position she wanted
to stick to, so playing beach would allow her to do so.
“I played outside hitter my whole high school and
club life, and I’m too short to play that at a D1 level,
so beach was a good way to keep playing without
having to give up my position and hitting,” explained
Jordan. Through connections, Jordan was able to
talk to head coach Dave Nichols about playing for the
beach program at FGCU that was just getting started.
Nichols extended an offer to Jordan to play, and long
story short, Caroline is now playing through a whole
back row rotation for the indoor team.
“I took advantage of every little opportunity I was
given. At first they told me I could be on the roster, but
then I didn’t know if I was going to be able to travel
or not. I had to show up to practice and give it my all
and hope that I would get to be one of the ones who
got chosen to travel. I got that spot, and then I got to
serve, and now I actually get to play a position on the
team when I had originally came from nothing.”
This season Jordan has played in 67 sets, and has
a 0.07 percentage of kills per set. In Monday night’s
game against University of North Florida, she had a
career high 19 digs.
Come out and see the team play this Friday
night at 7 as the Eagles take on ETSU. Jordan will
be playing on the back row of the court and wears
number 12 on her back.