FGCU returns to the pool with a win against Rice 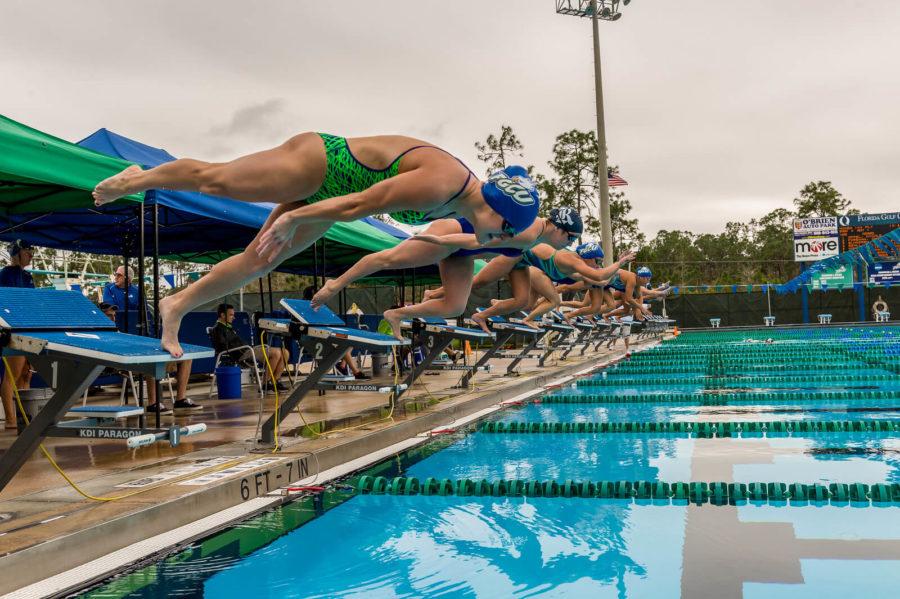 Swimmers start from the block in recent meet hosted by FGCU against Rice University. (Photo by Linwood Ferguson)

The FGCU swimming and diving team returned strong against Rice after the mid-season break.
The Eagles defeated Rice, 134-71, on Sunday at the FGCU Aquatics Center, winning 9 of the 11 events. FGCU earned its first win of the day in the 200-yard freestyle medley relay.
The relay team of Elise Haan, Katie Armitage, Yee Ching Wong and Kristen Julien finished with a time of 1:45.01 in the event.
The Eagles earned seven of their nine wins in individual events. Lani Cabrera took first in the 1,000-yard freestyle with a time of 10:13.23, raising her record this season to 6-0 in the event.
In the 50-yard freestyle, Katie Latham achieved her sixth win of the season, touching the pads at 23.84. The Eagles took four of the top five spots in this event.
Barbara Caraballo finished the 200-yard IM in 2:04.03, making it her fifth win this season in that particular event. Carballo finished two seconds ahead of her opponents, including her teammate Christina Kaas Elmgreen who finished third.
With a time of 56.24, Elise Haan earned another win for the Eagles in the 100-yard backstroke. This was Haan’s fifth win of the season, keeping her record perfect for this event.
Melissa Marinheiro placed first in the 500- yard freestyle. Marinheiro earned her third win of the season in this event with a time of 5:03.21, beating out Rice’s Hannah Huston and Cabrera.
The final individual event of the meet was won in the 100-yard breaststroke. Katie Armitage earned her seventh win of the season for this event, finishing almost a second and a half ahead of her competitors.
The Eagles finished the meet the way they started with another relay win. Made up of Cabrera, Caraballo, Latham, and Sara Hamilton, the relay team clocked in at 1:36.57 to win the 200-yard freestyle relay.
“The girls swam tough today after only being back for one day after a 10 day break,” FGCU head coach Neal Studd said. “We were a little up and down, which was expected, but ended up beating a very good and very well coached Rice team and are happy with the win.”
The No. 29 Eagles will face-off against No. 19 NC State, Liberty and Central Connecticut in their next meet. The quad meet will be held at the FGCU Aquatics Center at 10 a.m. on Saturday, Jan. 9.
Delete Image
Align Left
Align Center
Align Right
Align Left
Align Center
Delete Heading