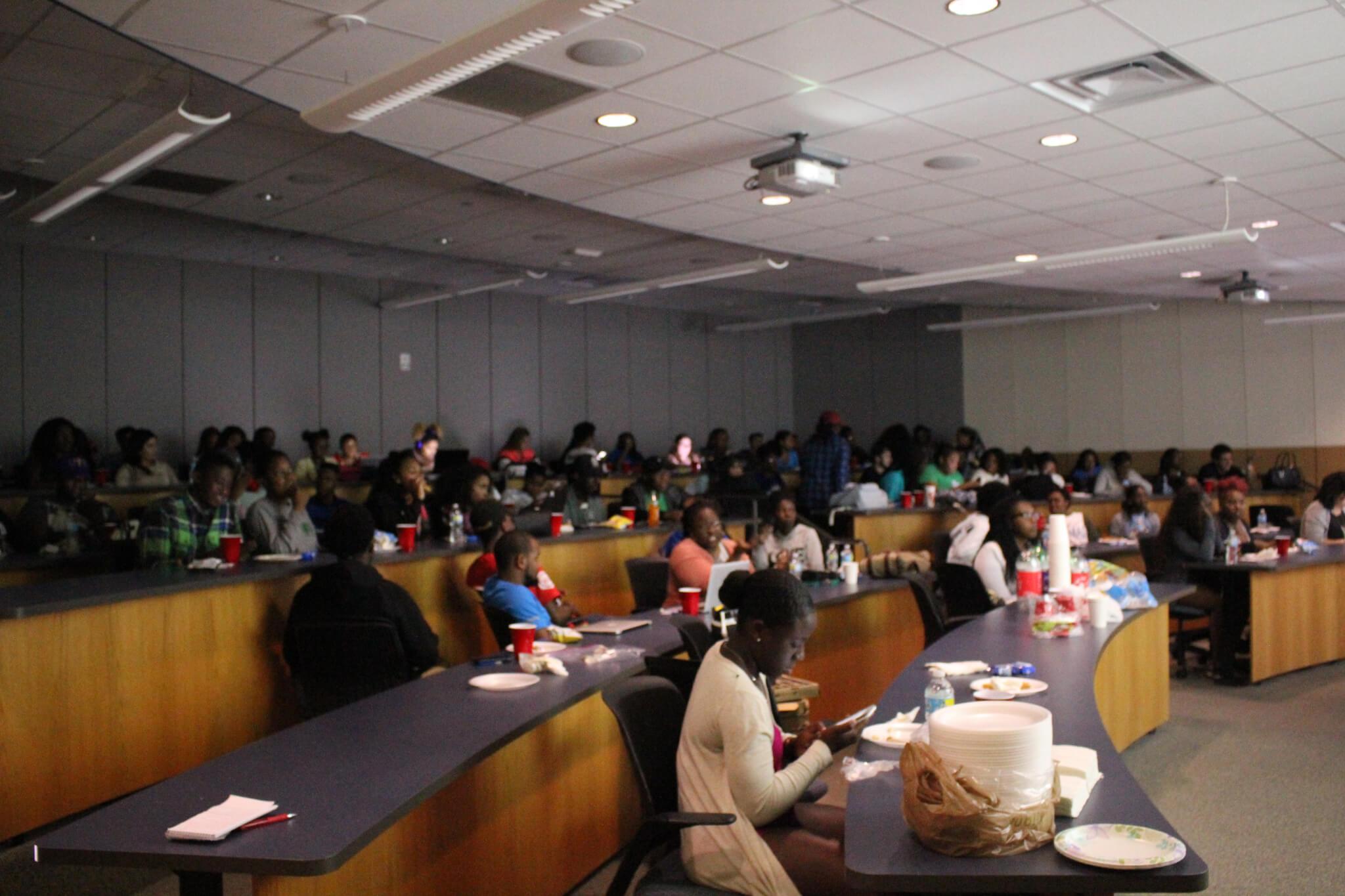 In the wake of the election that would determine the next president of the United States, FGCU’s Coalition of Black Organizational Leaders hosted a viewing party in Marieb Hall on Nov. 8.

The viewing started at 7:30 p.m. and within a matter of minutes, the lecture hall was filled with more than 80 students of diverse backgrounds who came out to watch the nation decide on their next president.

COBOL president Keturah Pongo said that the group decided to host the viewing party to bring the community together and start the conversation about what the election would mean for them.

“One reason why we decided to do it was because we thought if we hosted a party, people would go vote,” Pongo said. “When we have a viewing party, people will come and talk about it, so it was one way to push people to go and vote.”

Pongo explains that COBOL urged students to go to the polls, and during the viewing, they hosted a poll of their own to see how successful their endeavors were.

Of the 80 students in attendance, 76 were registered to vote while only 60 of those students did vote. Forty-two students also expressed that they voted for the first time – including Pongo.

For first-time voters like Nina Morice and Pongo, the election was something they looked forward to because of its historical impact and what it would mean for future generations.

“It’s my first time voting, and I think it’s important because the future of my generation depends on who wins the election,” Pongo said. “Being a minority, I feel that Trump has a lot of hatred in his circle, so if he wins, I think there is a thought process that it’s going to get worse for minorities.”

For Morice, the possibility of having the first woman president was something that she said she looked forward to but said it was what each candidate stood for that swayed her vote.

“I think women’s rights are really at stake in this election,” Morice said. “That’s what I take into account when I vote – is who is going to look out for women and ensure equal pay. I’m hoping that we elect a leader that can address some issues that congress hasn’t been able to.”

An hour into the viewing and presidential candidate Sec. Hillary Clinton, who had the upper hand in Florida, lost her lead to candidate Donald Trump – which caused tension to rise among students like Omeshia Ferguson.

“I definitely feel that Trump would be the wrong choice in this election because there’s a lot of women and children in the world that need a good leader,” Ferguson said. “He’s a businessman, so he’s all about business and not about families and the middle-class. And, while I do think him being a business man would help the country with financial debt, I feel like that’s the only thing he would help with.”

One of the biggest concerns members of the viewing had was what the election would mean in terms of racism in the nation especially for the group that fought for the rights of minorities on campus.

“Personally, I think if Trump wins, racism will be more present because people are going to think that just because we don’t have (a) black president anymore it will be okay to go back to the way things were, and I think because of his views in general, people are going to be more ignorant,” Ferguson said.

Malik J. Hines, a member of Alpha Phi Alpha, expressed indifference toward both candidates but remained hopeful about the outcome as long as the election was a clean one that resulted in a leader that had the ability to do what they set out to do and make an impact in the country.

“If it’s candidate Trump, repairing the image of what he’s portrayed and making sure he’s being a representative of all the people of this nation – because he has offended a lot of people,” Hines said. “But, if it’s candidate Clinton, she has a lot to do with her integrity and what she portrays to the people as someone that they can trust and stand behind.”

On a final note, Pongo said that the thing she most hoped for out of the election was peace.

“No hatred, no racism, no discrimination. Just peace,” Pongo said. “You have to keep educating people and making them aware (of problems in our nation) because if they don’t know why they should be peaceful or why they shouldn’t carry hate, the best thing you can do is educate them.”

And, according to Hines, regardless of who wins, the only thing the nation can do is stand together.

“Either way, we’re going to have to stand behind them for the next four years, so there’s no sense of rioting or being mad about it,” Hines said. “You just have to take it for what it is and look at the positives and what ways you can force the hands of the political system to hold them accountable.”