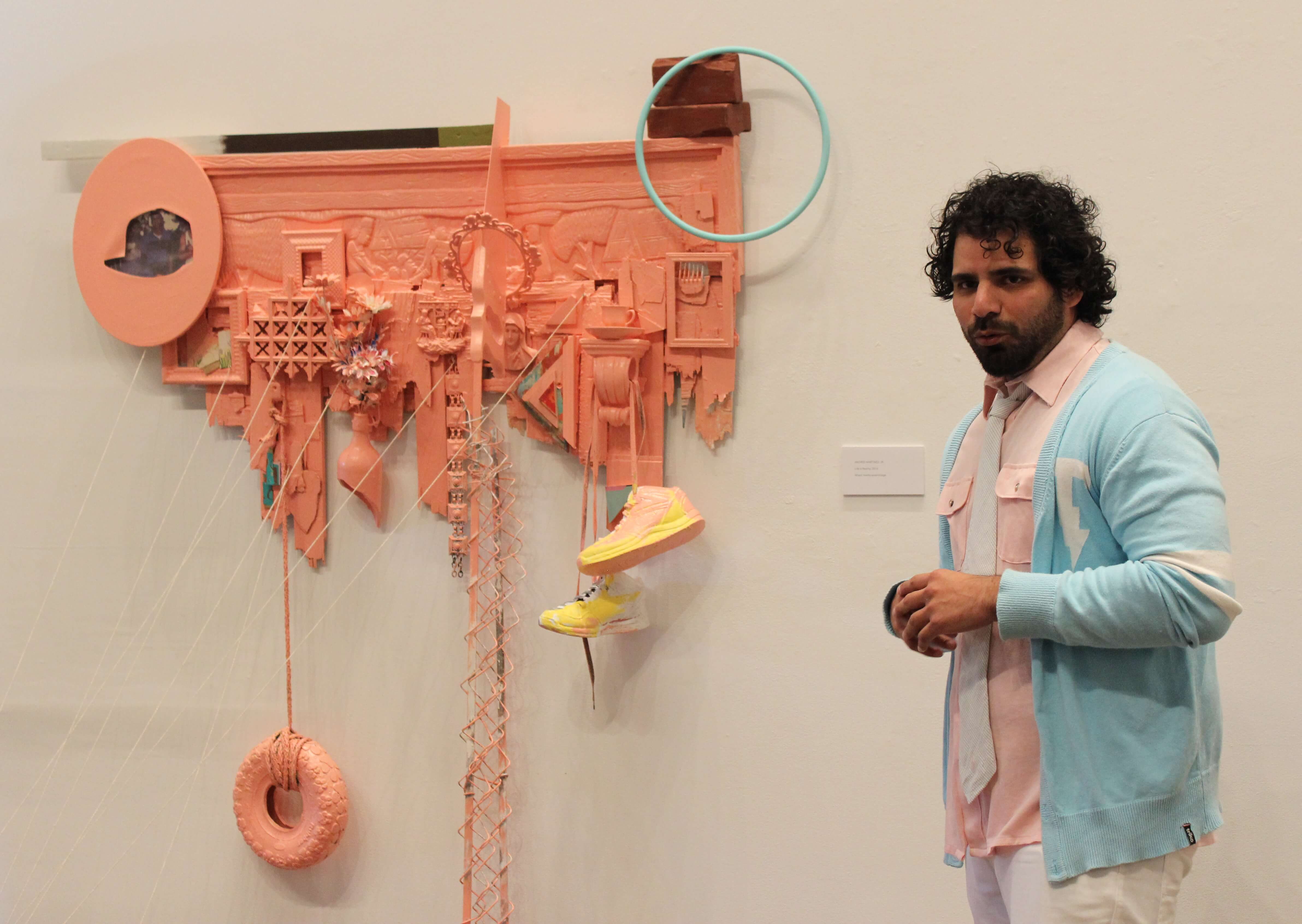 Andres Martinez Jr. stands next to a piece, explaining the meaning behind each detail. This piece spans the floor, with a crate placed in the middle of the room. (EN Photo / Aiden Strawhun)

The room is silent, but if you close your eyes you can almost hear it breathing.

Andres Martinez Jr. is an artist from Miami. Martinez currently has an exhibit on campus at the ArtLab Gallery, located on the west end of the library. His exhibit captures the essence of the city — Miami.

The exhibit is called “Escuchala la Ciudad Respirando,” which translates to “Listen, the City is Breathing.” The opening reception was held March 31, and the exhibit will be available through April 28.

Andres Martinez Jr. explains the meaning behind his exhibition, highly inspired by the life and art of Brooklyn and Miami. (EN Photo / Aiden Strawhun)

The title for the exhibit sets you up for the hauntingly realistic sculptures in the room.

Walking into the room, you first see a set of legs, fully decked out in baggy shorts with a pair of basketball shorts and boxers hanging out and a white tank top stretched all the way to the ceiling. The piece is called “Shorty wanna be a thug.” The legs are eerily realistic all the way down to a “7” tattoo and leg hairs.

Aside from the thug in the room, you also see various religious references. Martinez has a piece, called “Last supper, to go,” featuring the Last Supper with skateboard wheels attached to the bottom.

All of Martinez’s pieces appear to be carefully arranged and deeply thought out.

He uses bright, pastel colors to capture the life of Miami and contrasts with blacked-out pieces to show the negative sides.

In the corner of the room, painted in black on the bottom trim of the library’s wall are the words: “There ain’t no stars in the hood.” Near this painting there are a few pieces that show the negative sides of the city.

This impromptu painting was added to the exhibition just before it opened to the public. Martinez explained that the openness of the university scared him, as he was raised in the city; he’s not used to seeing stars at night. (EN Photo / Aiden Strawhun)

The artist uses a lot of broken glass and bottles in his art. He also incorporates mouthless faces. Multiple paintings in the exhibit were of a black man with eyes but no mouth. This appears to fit the theme of “Listen, the city is breathing.”