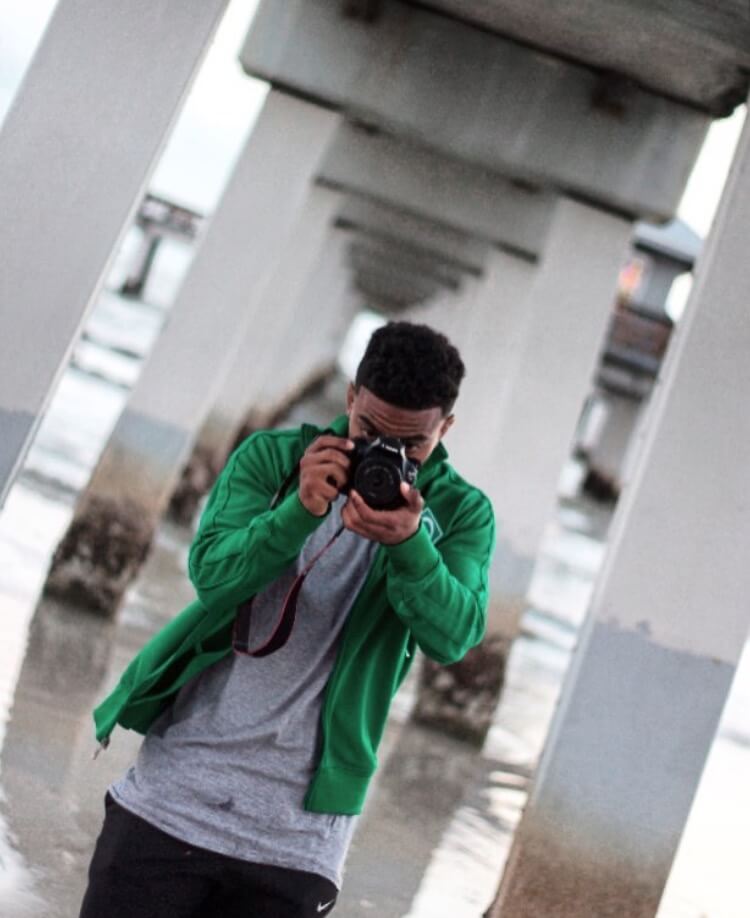 A girl stands tall, legs hip-width apart, hair cascading in waves across her shoulder with her heels planted firmly on the bars of the aged railroad track.

Birds flock along the shoreline as the sun is setting, casting a brilliant hue of gold and orange across the shimmering water.

A woman and a man walk just past the frame of the shot, as the woman turns her face and gives a disapproving glance toward the camera.

Student athlete Cameron Thomas has only been photographing “street life” for about three months, but his Instagram page fully captures a newfound passion he just discovered this past November through the lens of a camera given to him by his mom.

“My mom loved taking pictures,” said Thomas, an FGCU men’s soccer player and communications major. “She wasn’t serious about it, but she had a camera. I didn’t think anything of it really.”

While on Thanksgiving break, Thomas visited his mom in Maryland. Her friend had bought her a new camera, and Thomas’ mom offered him her old one.

“I took it back to my dorm, and I didn’t touch it for the whole fall semester,” Thomas said. “I didn’t know how to use it. I fiddled with it for a few times, but I put it away.”

After scrolling through Instagram, Thomas came to the realization that he could connect his inspiration from well-known photographers to his own camera he had in his room.

“I would see cool pictures and thought, ‘Wait, I can take those cool pictures with that camera,’” Thomas said. “I started doing some research and figured out how to use it.”

When he visited his mom the next time, he brought the camera with him and had her show him how to use it.

“I kind of fell in love with it and got better and better,” Thomas said. “I self taught myself. If I like something, I zone in. If I want to do a certain type of picture, I Google it and figure out how to do it.”

Thomas’ favorite subject to capture is what he has coined as “street life.”

“It’s not planned,” Thomas said. “The thing is, there is not much city in Fort Myers. You know how it is in the city. It’s real; it’s not staged. With the camera, you can make the picture look better than it looks with your eyes.”

The three most important parts of photography, Thomas said, are aperture, exposure and ISO.

The higher the aperture, the more light the lens lets in, and the lower aperture does the opposite.

Exposure is determined by the aperture and shutter speed and is the unit of measurement for how much light is allowed to reach the sensor.

“If you’re taking pictures of the basketball game and someone is running down the court, and you want to take a picture of them and everything be still, you’ll want a really fast shutter speed to capture that motion really quick,” Thomas said. “If it’s a little too slow, the person will be blurry. That’s where you have to balance the shutter speed.”

Photography has become a big part of Thomas’ life, yet he still finds a balance with his sport and school.

“I have classes three times a week, so honestly, that doesn’t take up that much time for me,” Thomas said. “I feel like I have a lot of free time.”

With the soccer team, usually Thomas would train at 7:45 a.m. five to six times a week. However, Thomas is injured and currently going through rehabilitation.

“If I wasn’t injured, it would be a lot harder for me, because we drain two hours each morning. Then, we have a workout Monday, Wednesday and Friday at 3 p.m.,” Thomas said. “A non-student athlete might think, ‘Wow, that’s crazy,’ and it is. But, I’m so used to it that it’s normal for me. I feel like if I didn’t play sports, life would be so easy time-management wise.”

Thomas felt that his original major choice was not a good fit, prompting him to switch to communications. If the chance arises, Thomas would be more than willing to pursue a career in professional photography.

“There’s a lot of good photographers,” Thomas said. “It’s all about networking, and that’s honestly more important. If you’re not in front of the right people, your stuff isn’t going to be seen.”