‘Our First 100 Days’ gathers indie artists for a cause

Entertainment news is very seldom known for getting too politically charged or involved in the democratic process, but as we’ve seen just this week, the two worlds are no longer mutually exclusive.

President Donald Trump’s rise to power caught many entertainers first off guard then infuriated, as heavyweights and underdogs alike from the cinema, arts, television and music communities used their platforms to speak out against Trump’s initial decisions in office. 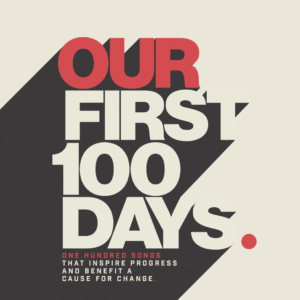 Most notably, Meryl Streep shamed him for mocking a disabled reporter during his campaign, and more recently, speakers and winners spoke out at the Screen Actors Guild Awards on Jan. 29.

Now, indie music creators are stepping up to stick it to the man in their own way; they’re putting their musical efforts toward a first 100 days collective of songs that portray unrest and unity to provide the perfect soundtrack for any protest.

This project, aptly named “Our First 100 Days” releases a song once a day for the first 100 days of Trump’s presidency.

The first 100 days are often when presidents are the most heavily scrutinized, and so, “Our First 100 Days” says action must be taken to protect the causes that will come under threat from this administration.

For a minimum contribution of $30, supporters will be able to access all 100 songs to be released, which are rare, unreleased or exclusive tracks artists will contribute.

The project teams up with organizations that encourage and promote social change.

They have groups for almost every social issue, including The People’s Climate movement for environmental issues, Cosecha for immigration issues, Southerners on New Ground for LGBT issues and Revolutions per Minute, an organization that provides strategy and support for artists making change.

What makes the project unique is these are indie bands speaking out; they continue to spread a message of acceptance and peace with the crowds they most vibe with — a Neolithic interpretation of “it takes a village” to raise a country.

You can find “Our First 100 Days” online at ourfirst100days.us, or search for it on Bandcamp to download the tracks so far.