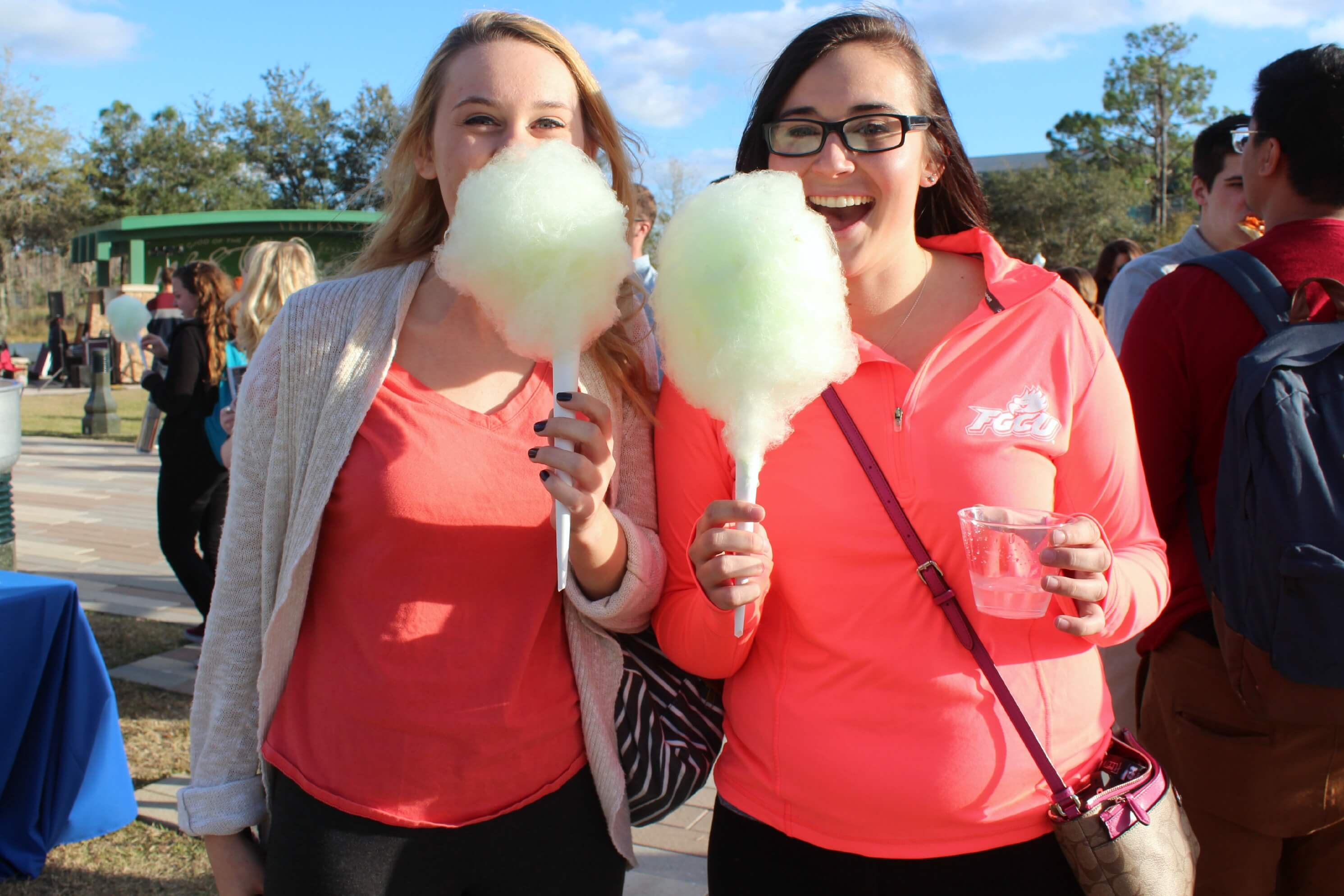 The sweet scent of funnel cakes began to waft through the air as the Supros warmed-up onstage under a large banner proudly boasting, “Ignite loves FGCU!” The crowd consisted of a little more than a dozen of the Supros’ closest friends, who were busy tossing around a couple of footballs and a Frisbee at the time anyway.
“Go long, Doug!” Someone shouted.
“Testing, testing, Jesus loves you,” Supros’ lead singer Jesús Núñez said onstage as a football whizzed past. “Not me Jesús, but you know, Jesus Jesus.”
Doug Paul caught the football with ease, much to the surprise of those present, who knew him only as their college pastor.
“I’m offended,” Paul said to the students gaping at him.
Winterfest made its debut this Tuesday afternoon on the Library Lawn. The festival, sponsored by the Christian club Ignite, included live music, cornhole, snow cones, cotton candy, funnel cakes, and pizza — all free to students.
Unlike most events on the lawn, the lines never reached two-hour wait times, likely due to the fact that there was no involvement and no promotion by the programming board. So who would be willing to give out free food without students’ tuition money to cover the cost? And more importantly, why?
That’s where Ignite comes in — the Christian club behind the event that chose to stay as private about its backing as possible, besides the aforementioned banner, of course.
“We want the campus to be blessed with this, and if no one extra comes to Ignite because we do this, that’s OK,” Paul said. “That’s not why we’re doing it.”
Paul explained how the inspiration for the festival, which was originally planned for fall, came from the series he was teaching at Ignite at the time. The series “For the Good of the Nest” was strongly rooted in the ideals laid out in Jeremiah 29:7 of the Bible:
“But seek the welfare of the city where I have sent you into exile, and pray to the Lord on its behalf, for in its welfare you will find your welfare” — Jeremiah 29:6
Following that spirit of seeking the welfare of wherever one happens to be, Ignite has stepped out of its usual meetings at Summit Church for the first time in the club’s 11-year history to interact with the people they see every day on campus, rather than weekly at worship and service.
It’s no secret that the Library Lawn is prime real estate for events, so it came as no surprise that the funnel cake and pizza lines stretched to the Starbucks entrance by the time the indie rock band officially took the stage with a cheery “Hi, we’re the Supros, and we’re supro happy to be here!”
Mathis Turley, who usually leads the worship portion of Ignite, took the backseat at Winterfest, instead standing in the crowd, cheering, “Yes, I love this one!” as the band began their most popular single, “Hush.”
As the sun set, Summit’s most popular duo, husband and wife team Andy and Rachel Graham, took the stage with a few covers of familiar songs such as “Cry Me a River” by Justin Timberlake. Before the music even began, though, Andy had the girls swooning over his Irish accent alone, while the self-proclaimed Ignite mascot, Johnny Clarke, began dancing center field without a care in the world.
As the night wound down, the couple called up Turley, who sighed a chuckle as he approached the stage as always. Paul took this time to begin making his rounds, blanket to blanket on the lawn, intently listening to each student’s input on the event.
“Did you choose funnel cakes and cotton candy because those are your favorite foods?” one student, Cassidy Murphy, teased.
“Well, yes,” Paul countered. “With great power comes great responsibility…like picking the food.”
Paul said the feedback was overwhelmingly positive, giving Ignite the green light to continue the festival in the future. He added that he hopes to eventually expand into one festival per semester to further promote the good of the nest.