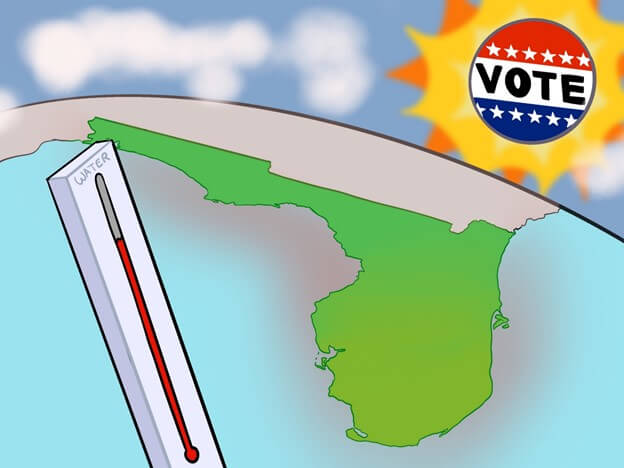 Harsh winds knocked down trees and storm surges flooded areas as category one Hurricane Eta hit landfall in the Florida Keys. Storms like Eta are normal around Florida’s hurricane season peak in September, but Eta struck on Nov. 7.

And just four days before on Nov. 3, a political storm struck the United States. In one of the most controversial elections in history, Joe Biden was declared the winner of the presidency. More quietly, Republican Byron Donalds was elected to the Florida District-19 congressional seat.

Donalds acknowledges that sea levels are rising, but he has said that there isn’t enough evidence to support that humans have an impact on climate change.

With climate change bringing harsh storms to Florida, what does this mean for southwest Florida’s environment?

Southwest Florida faces rising waters. According to the National Oceanic and Atmosphere Administration, the Gulf of Mexico saw record high temperatures this year. Government controls will be key to managing environmental issues.

The Everglades is an important part of Florida’s ecosystem, tourism, and water filtration. It’s still recovering from draining that began in the late 1800s up until the 1980s to make way for agriculture and urban development. Now with rising temperatures, it will face a new wave of destruction.

According to the National Park Service, the Comprehensive Everglades Restoration Act was established by Congress in 2000 has a total cost of $10.5 billion over its 35-year plan to rework infrastructure and the Everglades’ water flow.

Along with temperatures increasing and water levels rising in the Gulf of Mexico, hurricanes have been getting stronger and occurring later in the year. If hurricane season continues to follow this pattern, it could have devastating effects on the economy.

“It’s [later peak of hurricane season] starting to affect us during [tourist] season,” Cindy Banyai, a political science professor at FGCU, said. “Now we’re talking about dollars lost and what happens as sea level rise, and all those folks who have coastal properties are not going to be able to sell that land in 25 to 30 years.”

Banyai has a Ph.D. and focuses on international relations and public policy. She ran as the Democratic nominee against Donalds. Her environmental platform was based upon supporting the Green New Deal and upholding the Sustainable Development Goals.

Stronger storms will affect locals by making evacuation more difficult, and according to Banyai, public infrastructure may not be able to withstand it.

“We have disinvestment in public infrastructure all around,” Banyai said. “Roads and bridges are continuously dangerous if we did have to evacuate everybody. We have many places across southwest Florida and Florida in general that don’t have hardened shelters.”

While improving it may be helpful, in the long run, it could only be a temporary solution. According to Stefan Carpenter, an FGCU environmental studies professor who focuses on environmental policy, sea level rises could be too overwhelming.

“If you’re adapting to it [sea level rise], you’re going to see moving inland, and you’re going to have to raise infrastructure and possibly build sea walls,” Carpenter said. “That’s a Band-Aid, but a lot of it’s going to depend on how high oceans are going to rise. We’re talking anywhere from a foot to as high as eight feet before the end of the century.”

Rooney cosigned the 2018 Energy Innovation and Carbon Dividend Act, a bill that imposes a fee on carbon emissions. He was the only Republican who supported it. In 2019, he became a member of the Environment Subcommittee on the House Science, Space, and Technology Committee.

“Francis Rooney was really one of the few Republicans in Congress who expressly recognized that climate change is not only occurring but that it’s anthropogenic in nature,” Carpenter said.

Donalds’ environmental platform includes improving water quality and the Everglades. He wants to hold the government accountable for ensuring that it continues to fund the Comprehensive Everglades Restoration Project.

“For southwest Florida, water quality is our number one issue,” Donalds said in a promotional video. “It’s what we need for our economy here.”

“He said he opposes the Green New Deal and is emphasizing the need for cheap electricity,” Carpenter said. “He says we can’t run an economy off of renewable energy alone.”

For climate change, Donalds acknowledged the United States’ limiting of carbon emissions and is open to the idea of a federal response to sea-level rise. However, in the Congressional debates, he claimed that the science behind climate change is not settled.

“If you look at the recent articles, probably 99, or more percent of all scientific, peer-reviewed, gold-standard articles are saying that climate change is settled,” Carpenter said. “And it’s caused by people.”

Donalds did not respond to requests for an interview.

On a national level, Biden’s first promise as president is to re-enter the Paris Climate Agreement and have the United States become carbon neutral by 2050. He wants to incorporate the framework of the Green New Deal into his environment plan.

This means for the country, there will be a standard to follow regarding climate action. However, time may have run out for reversing climate change.

“Some major scientists are saying it’s probably too late to reverse what’s been done, but that we can still work towards mitigation of the negative effects of things like carbon sequestration,” Banyai said. “However, going carbon neutral is an amazing goal.”

Locally, Donalds’ platform could improve the Everglades if he continues Rooney’s work, but it’s a large issue that can’t be fixed within a typical two-year congressional term.

“I wish there was an easy fix on the Everglades,” Carpenter said. “You’re talking systematically undoing what we spent decades systematically doing. I think there is a renewed emphasis on the state level to take care of this. It may be that that provides an opportunity for him [Donalds] to do something at the national level that wasn’t there for his predecessor.”

According to Solemi Hernandez, the Southwest Regional Coordinator for the Climate Citizens Lobby and FGCU student, all the previous work for the Everglades may be in vain if officials continue to ignore the root of the issues.

“We are spending a lot of money restoring the ecosystem of the Everglades,” Hernandez said. “However, we’re still not addressing climate change, which is compromising all the money that they’re putting into the Everglades restoration.”

The Climate Citizens Lobby is a nonpartisan organization that works to connect citizens with congresspeople to combat climate change. The organization worked with Rooney throughout his time in Congress to improve the environment in southwest Florida. Their main goal is to promote the Carbon Dividend Act that Rooney cosigned.

According to Hernandez, an increase in temperatures causes wetlands roots to get weaker and disrupts water quality and the natural filtration of wetlands.

The Climate Citizens Lobby plans to work with Donalds on the basis of water quality and improving the Everglades.

“We always look into finding common ground,” said Hernandez. “We believe in the good of the people. Just like our relationships with Francis Rooney, it took us time.”

Much of the fight for the environment and climate change reversal belongs to the citizens as well as government officials. Despite it being a serious issue, according to Carpenter, it’s not as high on the general public’s concerns such as jobs or taxes.

“Policymakers, in theory, respond to the demands of citizens,” Carpenter said. “Climate change, I think it’s moving up, but it is starkly environmental concerns.”

Both Banyai and Carpenter said that individual actions have the power to improve the environment.

“We can also make a change,” Banyai said. “Moving to plant-rich diets, reducing the amount of personal transportation and looking at how we can reduce our consumption overall. If we coordinate with the private sector, the public sector, the nonprofit and the civil society sector, then we can actually reach these types of audacious goals, just like we reached the moon.”

“It’s [individual action] a bit like voting,” Carpenter said. “One vote makes no difference ever, but when you aggregate them, it matters.”

Environmental change depends on maintaining consistent policies over time, and the election cycles can threaten that consistency. According to Carpenter, it’s easy to fall into despair, but work can be done with effort and dedication.

“It’s sort of like the Dr. Seuss book, ‘The Lorax,’” Carpenter said. “’Unless a bunch of you care a whole awful lot, it’s not going to get better. It’s not.’”