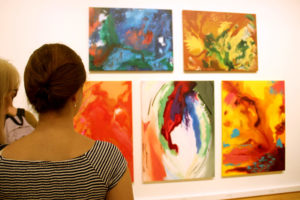 The final art exhibit of the semester premiered on FGCU’s campus on Thursday, April 20 with an opening reception.

The gallery, which was orchestrated by Patricia J. Fay and Mary Sullivan Voytek, Faculty Mentors and sponsored by U. Tobe, FineMark National Bank & Trust, the Smith Family Foundation of Estero, and the State of Florida, Department of State, Division of Cultural Affairs and the Florida Council on Arts and Culture, will stay on display until May 5.

On the day of the opening reception, student presentations were announced at 5 p.m. in U. Tobe Recital Hall with a reception in the Arts Complex that ended at 7 p.m.

According to her statement on the FGCU art gallery website, Tiffany Billings’s project, titled “CREATIVITY: MIND OVER MATTER,” was influenced by the way digital art helped her cope with Attention Deficit Disorder.

“Through the practice of artistic, cognitive processes, specifically digital painting, I have been able to change and manipulate how my skills are used from one hemisphere to the other,” Billings said in her statement. “I have learned to adapt my weaknesses into my strength.”

Franco, another senior artist, used her work to make a statement about working conditions for farmers in Immokalee with her project titled, “It Starts Here.” 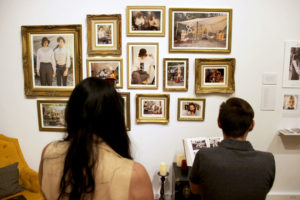 According to Franco’s statement, the black and white linocut series was meant to draw attention to unfit working conditions that should no longer be allowed.

“The tomatoes harvested out of Immokalee, Florida, are picked by thousands of different hands through strenuous labor,” Franco said in her statement.

“Although conditions and wages have been improving, farm workers have been, and are still, vulnerable to harsh and unethical working conditions. Farm workers not knowing their rights leads to oppressive conditions. Due to fear, their plight has often been ignored and voices silenced.”

According to Estrada’s statement, the five-painting series was inspired by an art therapy program she attended called, “Open Minds Through Art,” which treated patients suffering from dementia.

“During those art therapy sessions, I saw how working abstractly with color, texture and communication brought them back to the memories long lost,” Estrada said in her statement.

“This experience increased my awareness of working with the elderly and how precious our memories are.”

The artworks featured by the 17 students used a variety of mediums and touched on many subjects close to the artists’ hearts.

“In the beginning of the semester I had a vision of what my senior exhibition would look like, and to see it come together and look exactly how I planned was overwhelming,” Estrada said. “This exhibition was one of the most important days of my college career, it proved my hard work and growth in myself and growth as an artist.”