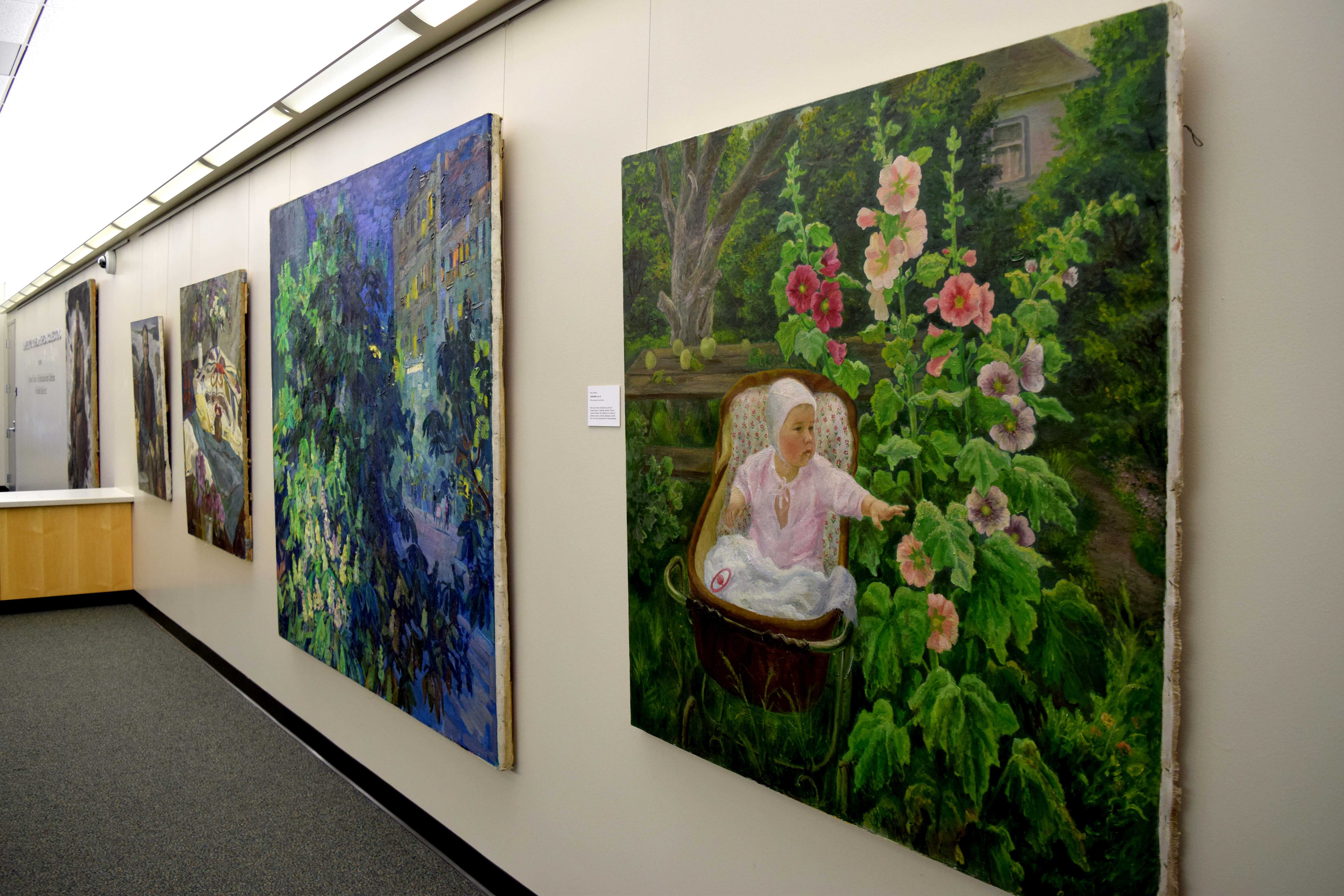 FGCU Eagles will have the opportunity to visit the Soviet Union in an artistic way this semester. The university library opened an exhibit of socialist-realism art Aug. 28.
The Archives, Special Collections and Digital Initiatives department of the FGCU library will have the exhibit on loan until its closing Dec. 3.

The portrait of Jurii Maniichuk is part of the 17 paintings being exhibited in the library. EN Photo/ Rachel Iacovone

The Maniichuk-Brady Collection of Socialist Realist Art was brought together by Jurii Maniichuk, who was born and raised in the Ukraine but later became an American citizen. He died in 2009, and his wife, Rose Brady, became the owner and administrator of the collection.
“I inherited the paintings and try to make them seen,” Brady said. “I’m in charge of that effort now.”
Maniichuk rescued the paintings from demolition in the mid-1990s. He traveled through the Ukraine with art connoisseurs and purchased the paintings from local artists andfamily members. Later on, in 1999, he brought the paintings to the U.S.
“He was able to export them legally at the time,” Brady said. “Nowadays, that couldn’t be done because the government would consider them national treasures.”
According to Brady, Maniichuk was inspired to collect the art because it reminded him of his past.
“He loved art,” Brady said. “He thought it was being destroyed, painted over or simply put in storage, and he decided to collect it.”
The entire collection is made up of 150 paintings. Out of which, 63 are currently being exhibited in the Ukrainian Institute of America in New York. Twenty are at FGCU and the rest are in storage in Washington, D.C. Out of the 20 paintings that were brought to FGCU, only 17 are being shown due to the space limitations of the library gallery.
Rebecca Donlan, assistant director of the Archives, Special Collections, and Digital Initiatives department, thinks it is a “fascinating collection.”
“[Brady] is happy to have them shown to another public,” Donlan said, “and we’re thankful for the opportunity.”
The collection is dated from 1950 to 1996. However, the art on display are mainly from the late 1970s to the 1980s.
At the time, the Soviet Union commissioned paintings for public display. This means that any artwork had to be approved by the Ministry of Culture to be exhibited. However, not all paintings in the collection are ideological, since most of these paintings were created in the post-Stalin period of socialist realism in which artists were trying to test the censorship boundaries.
“These are unusual works,” Donlan said. “These artists were working under certain conditions where they were expected to produce art that was in agreement with some type of regime, but it is not a uniform picture of propaganda.”
Lauren Muellner, a part time employee in the Archives, Special Collections, and Digital Initiatives department, believes this exhibit is particularly important because it can be appreciated by all students, not just art majors.
“It benefits a lot of students,” Muellner said. “Because of the historical connection of this collection, we can reach out to political science majors, history majors — any major really.”
Visitors can view the art from 9 a.m. to 5 p.m. Monday through Friday in room 322.