‘The Fate of the Furious’ delivers entertaining, mindless action

This past weekend, the eighth movie in the action-packed Fast and Furious series “The Fate of the Furious” opened in theaters to eager crowds.

The movie provided what was to be expected from the franchise: fireballs, explosions, twisted heaps of metal careening through the air, bloody fight scenes and of course — racing.

The movie opened up with a race scene in Cuba, a place where few Hollywood movies have been previously shot, and really took advantage of the surroundings.

The main characters played by Vin Diesel, Jason Statham and Dwayne Johnson, made an impressive action trio, where the characters built off one another, managing to come off at least somewhat complex among action scenes that could sometimes border on aimless.

Michelle Rodriguez, Tyrese Gibson and Ludacris played their continuing characters in the series well and maintained comic relief throughout the action-filled two hours and 16 minutes of the film. 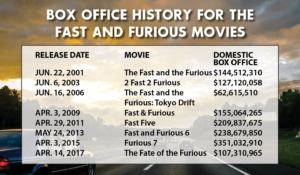 What most people are wondering (or hoping, painfully) is whether or not this movie will be the last of the Fast and Furious franchise, or if we’ll still be hit with one of these movies every year until we’re watching them in nursing homes.

There will be at least two more Fast and Furious movies and  much like their many totaled vehicles, the movie is like to get replaced by a newer shinier version