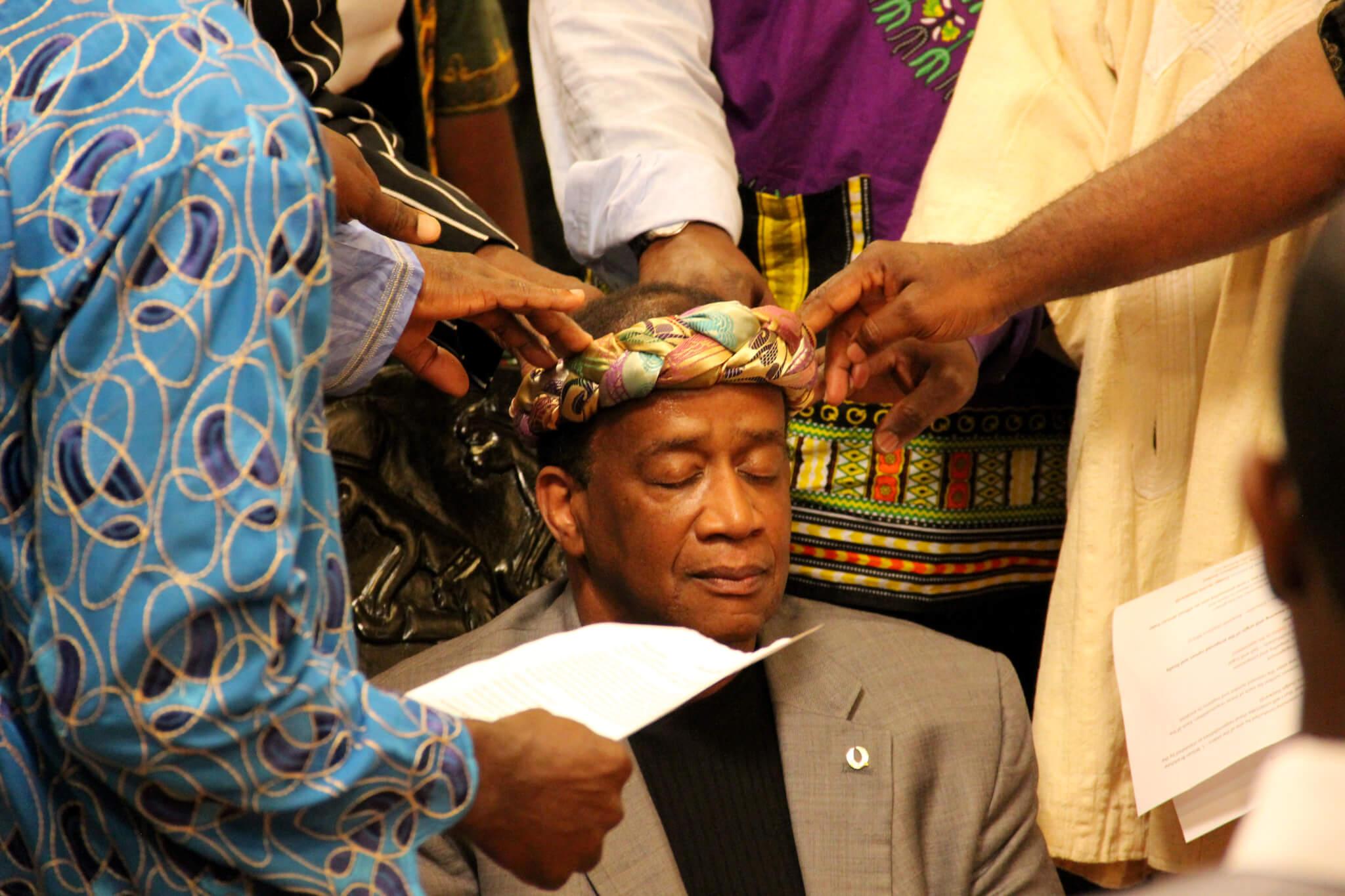 Filmed and edited by Katie Hopkins.

Guests were invited to “come enjoy an enchanting evening like none other and support our fundraising efforts for scholarships of African children.”

Besides the scholarship recipients, which included Coalition of Black Organizational Leaders President Keturah Pongo, those in attendance included the majority of administrators from FGCU’s College of Education as well as Provost Ronald Toll and more than 200 other community members – from police officers to talk show hosts to African boutique owners.

The guest of honor, though, was university president Wilson G. Bradshaw, who was inducted as an elder during the night.

“This is just amazing,” Bradshaw said. “It’s more than I expected, and to get this kind of recognition from this community is just unbelievable. And, it’s very humbling.”

The night was emceed by Yemisi Oloruntola-Coates.

Oloruntola-Coates, adorned in traditional African garb, approached the podium regally each time she announced speakers such as the group of FGCU students, including Pongo and Student Body President Thieldens “T” Elneus, who read aloud the poem “Africa In Me” by Diana van den Berg.

Midway through the night, dinner was served and featured African staples such as cardamom-seasoned rice and turmeric stewed cabbage and potatoes. After everyone had eaten their fill and indulged in a slice of chocolate cake or two, the production of traditional African music, played by Aiyb Dieng, began.

The music was soon followed by keynote speaker elder Mzee Kalowale, better known locally as Lee Pitts, the host of Fox4’s Lee Pitts Live. After speaking about his experiences – namely, his mid-2000s visit to South Africa – Pitts joined the other elders at the center of the room to begin the process of Bradshaw’s elder induction ceremony.

“This was a great, great moment,” said Peter Ndiang’ui, the president of ANSWFL and an FGCU professor. “It brought together a lot of people – the youth, the aged, people from all walks of life, the police, the community – and they all elected President Bradshaw. As African Network president, I couldn’t be happier.”

Bradshaw was honored with a small speech by each elder about his good works in the community. He sat in a traditional, carved wooden seat, low to the ground and gazing up at each elder, as they offered him their respective gifts, including a woven headband and an African mask.

According to its website, ANSWFL is a nonprofit organization that “strives to inspire and empower (members of the) African diaspora residing in Southwest Florida.”

Its vision includes providing tools for assimilation and inspiring and providing support for its members as well as inculcating values that recognize the worth of every human being by educating the Southwest Florida community “about what Africa and its people bring to the global arena.”

As an elder, Bradshaw intends to honor all ANSWFL standards by continuing his local involvement long past his presidency at FGCU, which ends in June.

“My intent, at this point, is to come back and teach at FGCU, a course or two a year,” Bradshaw said, “and stay engaged with the communities that we serve.”