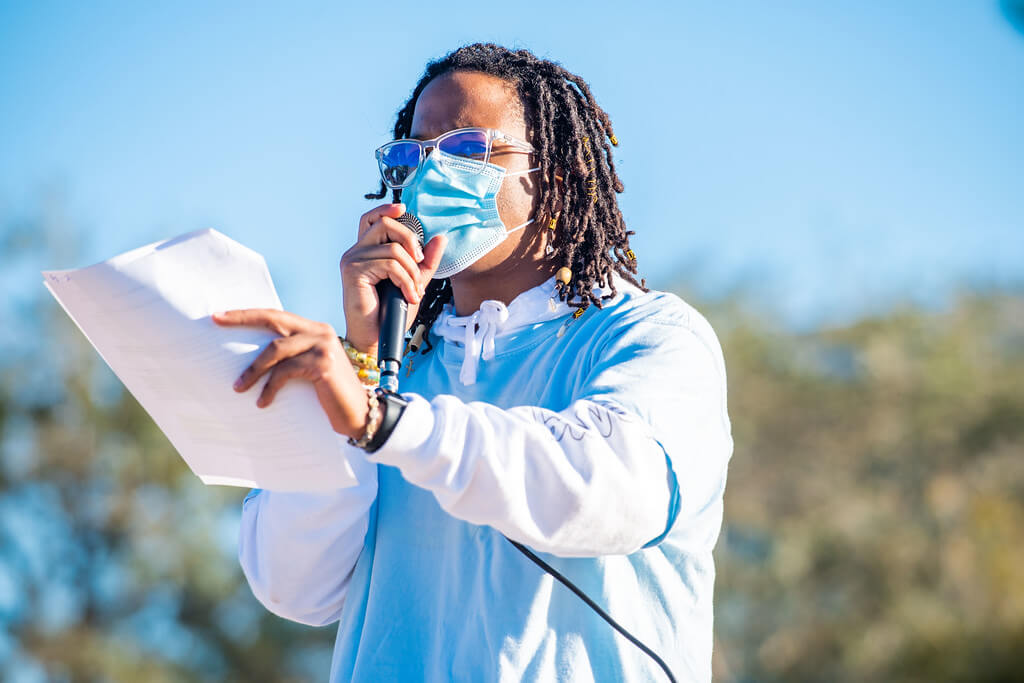 A speaker takes the stage at the BSA Demonstration. EN photo by Julia Bonavita.

Anger, disappointment, exhaustion and betrayal were the feelings that pervaded the Black Student Alliance’s (BSA) peaceful demonstration this Tuesday on the library lawn, where student activists gave speeches and called for change from FGCU’s Student Government (SG)

“This demonstration is happening today because SG failed us,” FGCU Senior Jah-Naika Lopez said. “And this is not the first time that I felt failed by my SG.”

The protest was organized in response to comments made by SG senators during last week’s reading of the BSA’s “Melanin Week” bill. The bill proposed a week of events meant to illustrate the importance of unifying the Black community and recognizing Black Excellence on campus.

According to an Instagram post published by BSA, SG Senator Nicholas Shepeard believed the use of the  term “Black Excellence” asserts superiority over other races and “Melanin” is an exclusive term and does not represent the entire student body. Shepeard argued that the removal of the word “Excellence” would not invalidate the contribution of black students on our campus.

“I am ashamed of the sheer audacity shown by the student body,” Eros Lewis, a student who spoke at the Senate meeting that occurred Tuesday night after BSA’s protest, said.   “The audacity, the ignorance and the gall to even think you could comfortably insinuate that Black is not excellent or that Black History Month somehow needs to be more inclusive.”

“I heard what was said and at first I was heartbroken,” Campbell said. “It hurts when I walk into that Senate room and every day, little by little, students that look like me are pushed out.”

SG Director of Student Opportunity Cedric Dunham said that he is embarrassed to be a part of student government and tired of showing up to meetings only to have his voice go unheard.

“The same problem is happening over and over and over,” Dunham said. “I’m tired of showing up to meetings, giving my all, voicing my opinions, and they’re always silenced. I’m tired of change being a suggestion instead of an action.”

Ostin Justice-Young, the public relations chair for the Black Student Alliance, called on the crowd to pledge their voices to empower others and destroy biases.

“One thing I do want to leave with you is that it is so important that we are using our voice for change,” Justice-Young said. “That we are inspiring and that we are empowering the youth.”

Tuesday’s demonstration ended after a march across campus, but many of the students who attended the protest made their way to the Senate meeting that followed and began with a nearly 30-minute scolding.

Students and alumni joined in-person and via zoom to express their thoughts. After each speaker yielded their time, cheers could be heard erupting from the crowd gathered outside of the Cohen ballroom.

The first speaker at this meeting was Rose Charles, the BSA’s treasurer and one of the authors of the Melanin Week bill. Charles called for Senator Nicholas Shepeard to resign.

“Nick Shepeard, you are a racist. On Tuesday, you showed who you are and what you stood for,” she said. “I ask that you, Nick Shepherd, resign. I ask that those who supported you follow your lead, as they did on that day, and resign as well.”

Shepeard did not resign, but he apologized for offending anyone and said that he looks forward to having conversations with some of the members of the public who addressed the Senate.

“I am very disheartened,” Shepeard said. “I only sought what’s best, what was best for the student body and government and students.”

Shepeard was issued four discipline points and a request was made to form an impeachment committee to investigate whether he violated the SG Constitution or the Senate’s rules and procedures. All but three senators voted against Shepeard in a vote of no-confidence.

Senate President Carson Brown spoke at Tuesday’s Senate meeting and implored the senators present to think about the people that they represent.

The “Melanin Week” bill passed with a 33-0 vote, but for many, this bill is just the beginning.

“It shouldn’t take a crowd gathering. It shouldn’t take years of protesting the same thing every semester on this campus, for there to be some kind of acknowledgment,” said Shantae Clarke, the marketing and advertising co-chair for the BSA. “So, the current senators of the Student Government, hold yourselves accountable. This shouldn’t be a recurring issue.”