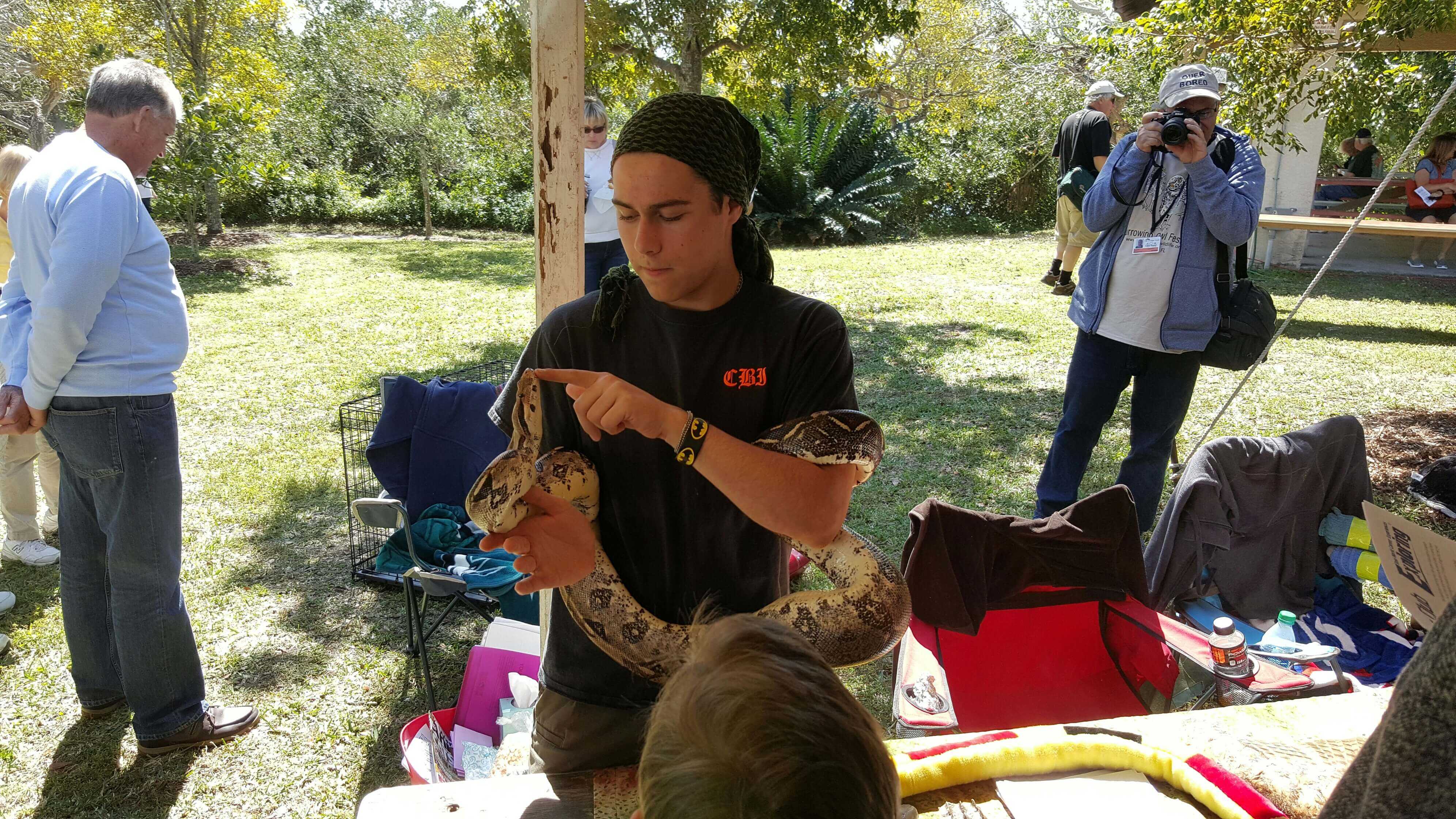 Everything from a Boa Constrictor to Gopher Tortoises — hot dogs, beer, all-natural soaps and handmade jewelry — were on display at the Burrowing Owl Festival in Cape Coral this weekend.

This was the the event’s 14th year running. It is hosted by the Cape Coral Friends of Wildlife organization. The main goal of the festival is to increase awareness about the Burrowing Owl, its habitat and needs, and what we can do to help them.

The event drew a large crowd. By 10:30 a.m., only a half hour after the event started, the parking lot was close to full, and Rotary Park was swarming with people.

There were four bus tours available to go see Burrowing Owls at one of their many nesting locations nearby. Additionally, educational talks, children’s crafts and several interactive activities were available at the park and environmental center on site.

One of the talks was hosted by John Herman, an associate professor of wildlife biology at FGCU. The talk was titled “Gopher Tortoises and Burrowing Owls: Ecosystem Engineers.”

“One of the main problems is that once we start altering the land for our purposes, we don’t take into consideration how it affects the organisms that live there,” Herman said, “but the solution is easy. We have to change what we’re doing and make new observations.”

Herman spoke to a room at the environmental center (EN Photo / Melissa Neubek).

Herman said the second problem is that there aren’t enough people involved.

“We have to get out of the mentality that one person can’t make a difference,” he said. “You are the solution. It just takes enough of us to get the ball rolling.”

Herman’s message reached a packed room, which kept filling as the talk went on. Keeping the crowd laughing and engaged, he was able to get his fundamental message across about the work that needs to be done for these owls and tortoises — burrows are essential to their survival — they are key.

Outside the room where the talks took place, there was plenty of activity. There were large and small tents housing organizations like the Calusa Nature Center & Planetarium, the J.N. Ding Darling National Wildlife Refuge and the Clinic for the Rehabilitation of Wildlife.

Patrick Cavanaugh, a junior at Dunbar High School in Fort Myers, had been working at the Calusa Nature Center for seven years when he first became a junior naturalist, a job he still fulfills.

One of his many duties as a junior naturalist is to handle the animals. At the festival, his relaxed demeanor while an 8-foot Boa Constrictor slithered around his neck and arms drew much attention.

“Snakes and reptiles are probably my favorites to work with, and I’d like to be a Wildlife Manager one day,” Cavanaugh said. He then added, “we love all the volunteers we get from FGCU, too.”

Besides wildlife organizations and live animals, there were several local vendors. One of those vendors was Jim McAbee, the owner of Earth 21 Arctic Body & Bath. This was McAbee’s seventh year as a vendor at the festival.

McAbee started making soaps for fun, but then decided he really loved educating people on the importance of using all-natural products as much as possible.

“It keeps you a lot younger,” McAbee said.

A wildlife art contest was also held during the festival. Seven schools participated in it. One of the students who participated was 13-year-old Mallory Brookes, who said she was excited to attend the festival for the first time, and whose favorite thing she saw was the skin of a Reticulated Python.

Ralf Brookes, Mallory’s father, said he brought her and her brother, Michael, age 10, to the festival so they could learn about the wildlife where they live.

“It’s a great event. They were excited about the art contest, and it’s been a great time,” Ralf Brookes said.