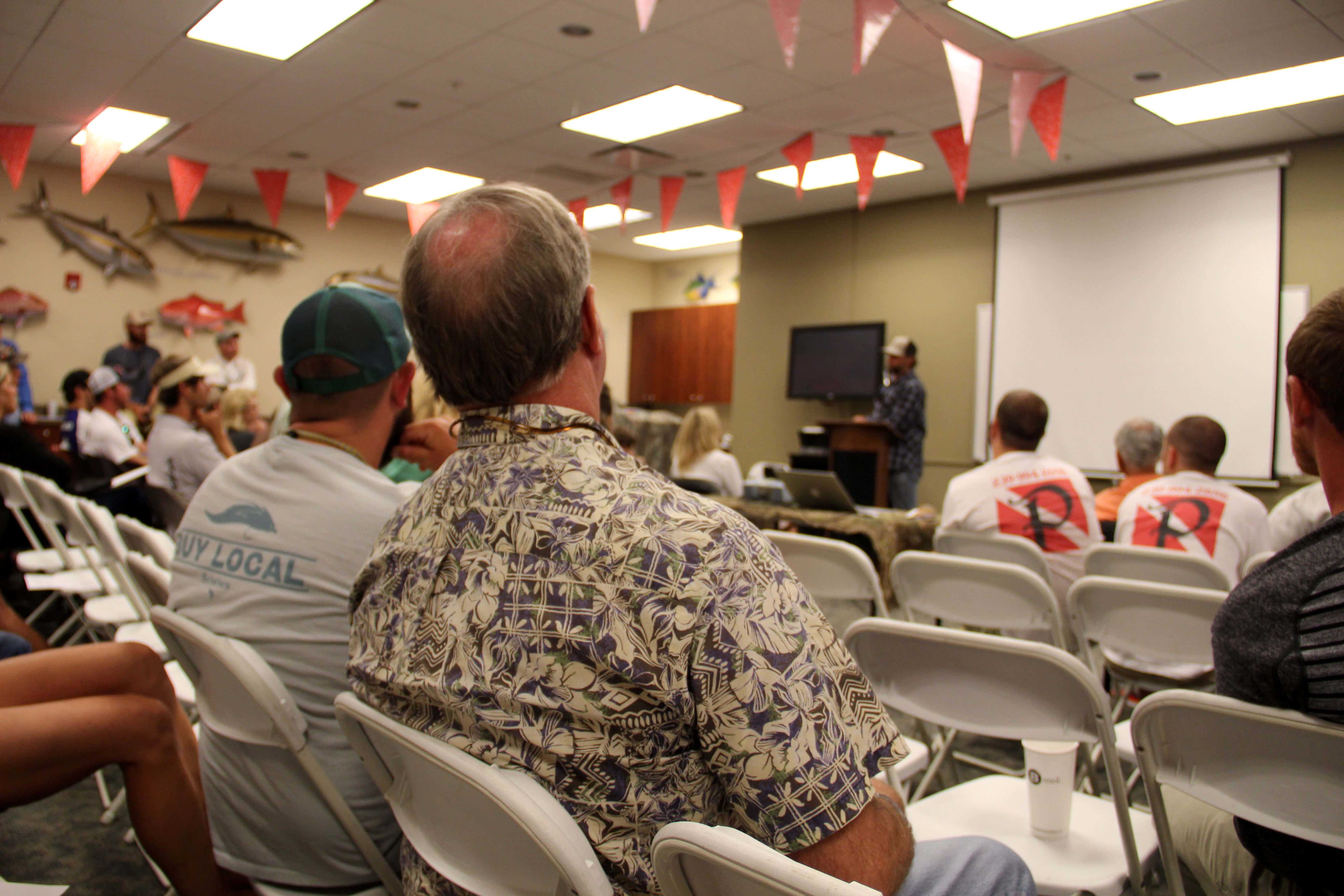 Wednesday night’s Captains for Clean Water meeting brought together 60 diverse people — FGCU students and longtime locals, National Rifle Association members and Sierra Club members — to talk about one issue that has united them all: the effects of the Lake Okeechobee releases on fishing.

Since February, the United States Army Corps of Engineers has released billions of gallons of Lake Okeechobee fresh water into the saltwater of the Gulf Coast. For two weeks in February, the USACE released 3.7 billion gallons of water into the Caloosahatchee daily and has since lowered the daily release amount. The releases have been made in an effort to lower the water levels in Lake Okeechobee after an unusually high amount of rainfall in January. Too much water in the lake could put pressure on the dikes supporting it and risk flooding surrounding towns.

The fresh water has changed the salinity of the Gulf Coast’s water, killing off marine life from seagrass to redfish. This has had a negative impact on businesses across the coast, particularly fishing charters.

“I think it’s pretty obvious that our fishery is in decline,” said captain Daniel Andrews of Andrews Charters, who said the releases have hurt his charter business.

Andrews is one of the founders of CFCW, a nonprofit organization that was created in February to educate locals and Florida legislators on the harm the lake releases have done to the local economy and ecology.

Andrews brought FGCU assistant professor James Douglass to the meeting to talk about the science behind one of the biggest ecological problems the freshwater releases are causing in Southwest Florida — dead seagrass.

“The ups and downs in salinity are too extreme,” Douglass said, “and it kills the seagrass.”

There are different kinds of seagrass across the Gulf Coast. Some survive well in water with high salinity, and some can survive well in fresh water. But, Lake Okeechobee freshwater releases are changing the salinity of the water so quickly and so severely that it is harming even the grass that could survive in fresh water.

The particles and brown color of the fresh water is also making the saltwater murkier, which makes it harder for sunlight to reach the submerged seagrasses. Douglass explained that seagrass is the key to survival for a lot of marine life, such as manatee that eat the grass.

When one attendee asked if it’s possible to replant the seagrass, Douglass confirmed that it is.

“But, if it died once, it’s probably going to die again unless you fix the problem that killed it,” Douglass said.

Another problem with the freshwater releases is that the farmland surrounding Lake Okeechobee sometimes back pumps its water, which contains nutrients from fertilizer, into the lake. When the nutrients in that fresh water reach the Caloosahatchee and eventually the Gulf Coast, they feed algae and can create algae blooms and red tide, both of which are harmful to marine life.

CFCW’s proposed solution to the harmful freshwater releases is to use Florida’s Amendment 1 funding to purchase land south of Lake Okeechobee from U.S. Sugar and use it to create storage areas and storm water treatment areas. The treatment areas would be able to reduce the nutrients from the lake’s releases, which CFCW said would make it clean enough to release into the Everglades without harming organisms there.

To educate voters and push legislators to take this action in an election year, CFCW has started a marketing campaign.

Captain Chris Wittman, a guide for Stillwater Fishing Charters and host of the Destination America show “Wild Instinct Outdoors,” said the group’s first PSA, which came out Monday, was viewed by 248,000 people within 48 hours of being posted. The group has made four PSAs now, funded by the Associates & Bruce L. Scheiner law firm.

“We’re also six to eight months into making a documentary to help educate people on what’s happening and what can fix it,” Wittman said.

Wittman said one of the biggest obstacles between the group and acquiring the land south of Lake Okeechobee is the landowner, U.S. Sugar, which has sugarcane farms on the land.

Wittman said that Tuesday, March 18, he attended a closed-door press conference held by U.S. Sugar in Fort Myers’ Hotel Indigo. He said several other fishing guides were not allowed inside, but Wittman was let in because he had his press credentials with him. Wittman was asked by both the press conference organizer and a police officer at the event to show his press credentials, even after he was already inside the room.

Wittman said that after he asked one question during the question and answer session, the press conference organizer ended the conference.

“For them to come to Fort Myers and directly address this … this is a major, major power we’re fighting,” Wittman said.

Along with the PSAs and the documentary, CFCW has also spoken with Michael Donovan, the executive director of Bullsugar.org. Bullsugar is a non-profit organization dedicated to buying the land south of Lake Okeechobee.

While Wittman and Andrews are focused on educating people about the Lake Okeechobee releases and the possibility of buying the land south of the lake, Donovan told the group he believes the key to acquiring the land is putting a politician in office who will oppose U.S. Sugar subsidies and fight to buy the land.

He encouraged the group to stay involved with CFCW and consider becoming certified to help register people to vote.

“If you want to know who’s going to fix this,” Donovan said, “look around the room.”

[This article was updated on March 19th.]