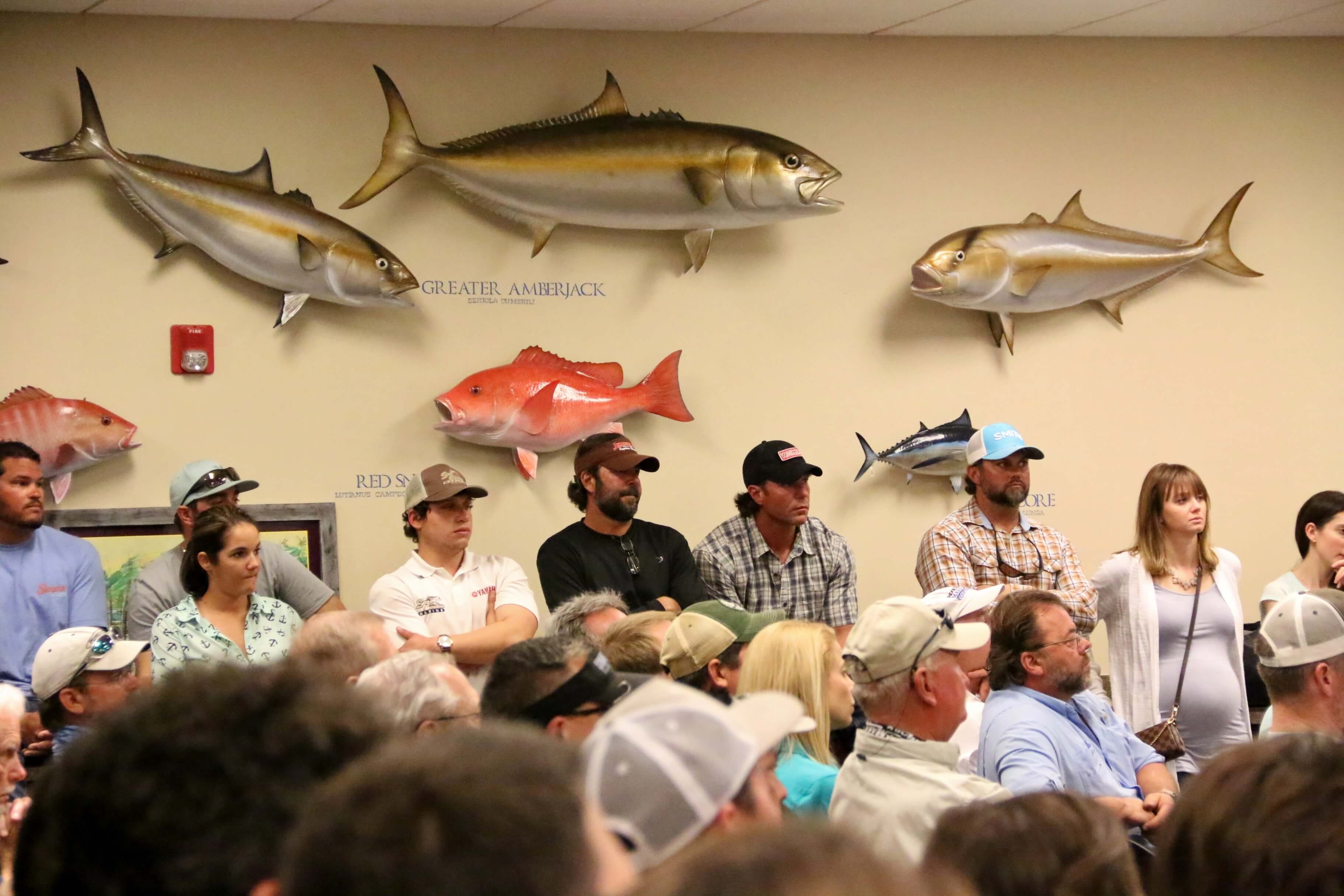 Captains for Clean Water hosted a meeting at Bass Pro Shops Friday night to talk about the releases from Lake Okeechobee into the Caloosahatchee River and how it is affecting their lives on the water. (EN Photo / Kelli Krebs)

Captains for Clean Water (CFCW), a grassroots movement that was founded by local fishing captains, held an open forum at the Bass Pro Shops in Gulf Coast Town Center on Friday Feb. 19 at 7 p.m. The forum was intended to educate attendees on how Southwest Florida is being affected by the lake’s runoff, which began again due to strong rains caused by El Niño.

Chris Wittmore talks solutions to fixing the Lake Okeechobee water crisis during Friday night’s open forum. Captains for Clean Water hosted a meeting at Bass Pro Shops to talk about the releases from Lake Okeechobee into the Caloosahatchee River and how it is affecting their lives on the water. (EN Photo / Kelli Krebs)

Record-high rain levels have caused the Okeechobee dike to fill with more water than planned for, sitting approximately four inches over the preferred water levels. In effort to relieve pressure on the nearly 90-year-old dike, the United States Army Corps of Engineers began releasing billions of gallons of water into the Caloosahatchee and St. Lucie Rivers in January.

“We want to partner with our elective officials to fix this,” said Captain Daniel Andrews of Andrews Charters. “We want to move forward in positive and work together to get things done.”

Freshwater mixing with saltwater can have devastating effects on local marine life. It can cause benthic animals, such as oysters and clams, and delicate sea grass to die. The grass can then wash up on Southwest Florida’s shores and take years to grow back. Freshwater can also be devastating to fish populations such as snook, tarpon and redfish that rely on estuaries to survive.

In Southwest Florida, water resources are affecting not only fishermen and boat charters, who rely on water quality for a living, but tourists, local businesses and real estate agents and developers as well.

“This is an economic situation as well as an ecological situation,” said Chris Whittman, a Coast Guard licensed Master Fishing Captain at Stillwater Charters. “The way our dollars work in our community is this will touch each and every person in this community in some way.”

CFCW demanded that the money allocated to the purchase of land south of Lake Okeechobee through Amendment 1 be used after two years of no progress. Once the land is purchased, CFCW wants the water to flow south through the Everglades instead of the Caloosahatchee and St. Lucie rivers. CFCW also wants representation for fishermen on the South Florida Water Management District Board.

“We can’t expect the water to be clean tomorrow,” Whittman said. “We need to make our voices heard as a whole Southwest Florida issue.”

Nearly 200 fishermen, boat charter captains and concerned Southwest Florida residents attended Captains for Clean Water forum at Bass Pro Shops Friday night to talk about the releases from Lake Okeechobee into the Caloosahatchee River and how it is affecting their lives on the water. (EN Photo / Kelli Krebs)

CFCW formed when Andrews and Captain Josh Constantine of Caloosahatchee Cowboy Charters met with Fort Myers mayor Randy Henderson in early February. The organization is pushing for state legislatures to assist in purchasing the land directly south of Lake Okeechobee to construct storage needed to constrain the water.

“A lot of these guys, like Mayor Henderson, have the best intentions, but they don’t see it every day,” Andrews said. “It’s our job to let them know. They have murders and other kinds of terrible things happen in Fort Myers; this is not the first thing on their desk every morning, and it’s our job to make it the first thing.”

“We’re looking for the whole solution,” Ruane said. “I want the lake to be reinforced. Why? Because right now, we don’t have a solution. We could buy land, we could do whatever. And I want to do that. When we go to Washington we’re going to talk to the Army Corps of Engineers, because I want that problem eliminated.”

During the meeting, CFCW urged younger citizens, such as those at FGCU, to get involved with their mission by taking to social media to raise awareness.

“If you tell 1,000 people about this issue,” said PJ Shiner, who proposed his plan to film a documentary on the crisis. “You’ll have 1,000 people demanding for it to be fixed.”

More information on CFCW can be found on its Facebook page and at captainsforcleanwater.org.