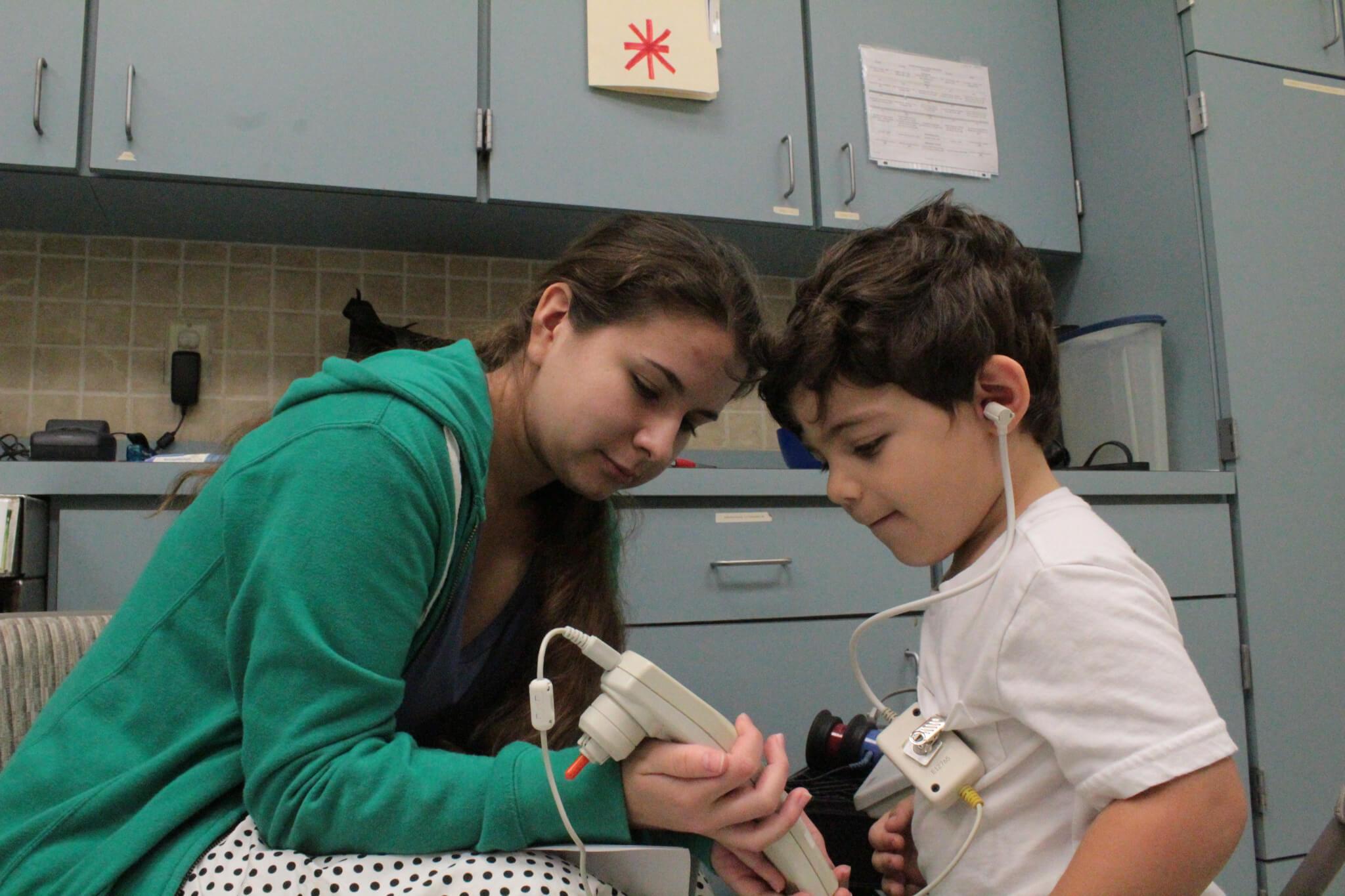 Joe Jackson, coordinator of the Bonita Springs Lions Club sits on a bench inside the Family Resource Center at FGCU where kids aged three to six wait to get their eyes and ears checked.

He laughs at a little boy named Arthur Bejhaj, and prompts the child to give him high-fives before he’s called in for a scanning that could make a huge impact on how he is able to learn.

What started as a civic engagement project turned into the establishment of FGCU’s second club in the state with the International Lions Club.

Established in 1925, the Lions Club – whose motto centers around service to others – was challenged by Helen Keller to become the “knights of the blind.”

Since then, members of the club strive to help the community by hosting regular vision and hearing screenings, and have prevented the vision loss of more than 30 million people to date.

FGCU students and Lions Club RSO, members paired with the Lions Club of Bonita Springs to host the free event for the children of FGCU’s Family and Resource Center on Nov. 4.

From 9 a.m. to 11 a.m., children were ushered into testing rooms where RSO members tested their vision and hearing. A blonde little girl, named Zoey Quee, was the first to be screened.

Quee was seated in a chair in front of RSO president Rachel O’Dell, who helped her relax by saying that they were going to play a game while she prepared one of two machines – the audiometer and the aeroscan – that would test Quee’s hearing.

She then placed headphones over Quee’s ears and told her that whenever she heard a sound, she was supposed to touch the side of the headphone she heard it in. As O’Dell worked, she explained the differences between the machines she used.

“The audiometer tests the child’s connection to understand what they hear, so it’s 99 percent effective,” O’Dell said. “But the aeroscan tests the function of the eardrums and catches any ear problems a child may have.”

By playing sounds at different frequencies into the child’s ears, O’Dell is able to tell how well they are able to hear and if there are any problems associated with the connection between the vibration of the sound off of the eardrum.

Next, the children moved onto their vision test, where Linda Powrir and FGCU student Kaylee Clifford used the spot vision screen to test their eyesight.

According to Clifford, the spot scan can be used to test the eyesight of those ranging from six months to a 100 years old.

The machine operates in low light by focusing on the eyes of patients onto the screen where it scans their eyes and captures a photo that also tells examiners where the child stands on a specific spectrum.

The test has the ability to detect strabismus (crossed eyes), astigmatism (blurred vision) and other differences between the eyes which can lead to blindness if not corrected early enough. Luckily, each of the children was tested accordingly and out of the 23 that took the free screening, only eight were referred for further examination.

Exams like these are incredibly important to have done at early ages to catch problems that may develop later on in life, like lazy eye, which – according to Jackson – if not corrected by age eight, could lead to blindness.

He stressed the importance of both exams and urged parents to get their children screened either at free events like theirs or in private.

For Eagles who missed the screening but would like to participate in future events, both Jackson and O’Dell say that the organization is always open to volunteers who are willing to help kids for a great cause.

“Our dream is to have an FGCU team,” Jackson said. “The problem is scheduling between class, work and other activities.”

Despite this, it is something that Jackson can work with. Students who would like to become involved with the Lions Club or future activities can reach out to Jackson at JJacksonL47@gmail.com or O’Dell at Raodell9600@eagle.fgcu.edu. They can also go the Lions Club RSO located on Eaglelink for more information.