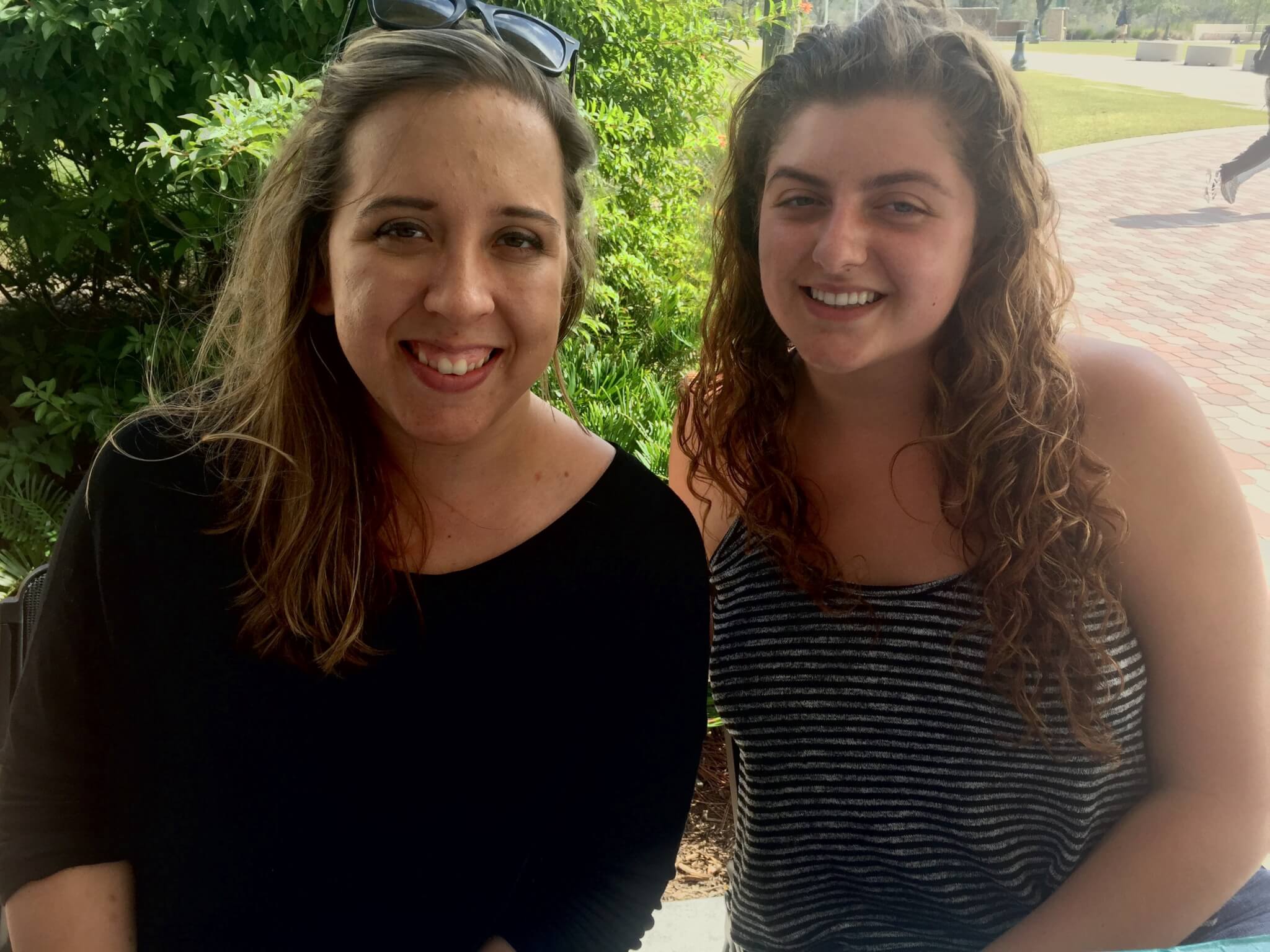 Deanna Simmons (left) and Victoria DiMaio (right) during a tabling event on campus to raise awareness of human trafficking. DiMaio said that her father inspired her to lend a hand to help victims of trafficking. (EN Photo / Georgette French)

When founders Lowell and Sally Senitz created the Wings of Shelter organization as the first safe house for victims of sex trafficking in Southwest Florida, their goal was to dedicate their lives to intervening and rescuing children caught in oppression.

The organization works to prevent child sex trafficking around the world, and due to its licensing through the Department of Children and Families, the organization also acts as a long-term shelter for victims of trafficking.

FGCU students Brianna Collins, Victoria DiMaio and Deanna Simmons paired together with Wings of Shelter for their service-learning project, Eagle’s Wings, which focuses on creating a discussion board to help raise awareness about human trafficking.

DiMaio, a junior, was drawn to the movement because of her upbringing with a father in law enforcement.

“He has witnessed some of the darkest acts of violence,” DiMaio said. “He has seen people at their weakest, and he has saved many lives. I respect him for this, and it’s my father’s selfless nature which inspires me to help others.”

Deanna Simmons (left) and Victoria DiMaio (right) during a tabling event on campus to raise awareness of human trafficking. DiMaio said that her father inspired her to lend a hand to help victims of trafficking. (EN Photo / Georgette French)

DiMaio said that she also agreed to work with Wings of Shelter for personal reasons after hearing about two high school students in her hometown being prostituted against their will.

“I began to wonder what life was like for the victims of sex trafficking after they were rescued,” DiMaio said. “Most importantly, I wanted to know how I could help.”

Her curiosity led her to the Service Learning Fair at FGCU where representatives for Wings of Shelter told her that there was a base in her hometown, Naples, which rehabilitates young female victims of both international and domestic abuse.

The organization then helped give her more information about how she could help, and shortly after, she and her classmates decided to work together to aid the organization.

“Wings of Shelter was the first organization brought up when we were discussing possible partnerships for our service-learning project, and it immediately stuck,” DiMaio said.

Along with Collins and Simmons, the group — who calls themselves Eagle’s Wings — will be working to get donations of non-monetary items, ranging from feminine hygiene products to razors and shaving cream.

Eagle’s Wings will also be accepting donations — 100 percent of which will go toward helping victims of sex trafficking in the Southwest Florida area.

There will also be a discussion aimed at raising awareness of human trafficking around the world with guest speaker Hillary Lemaster, the executive director of development at Wings of Shelter.

According to the National Human Trafficking Resource Center, there are more than 1,200 human trafficking calls made this year with 400 cases reported as of September 2016, ranking Florida as third in the nation for cases of trafficking. Worldwide, approximately 30 percent of all sex trafficking victims are U.S. citizens.

DiMaio said the discussion will provide an overview of domestic minor sex trafficking reports and will also discuss the victims, the circumstances that made them vulnerable to their attackers and the grooming process of the attackers.

“This is something that students should care about because human trafficking is happening every day right in our own backyards,” DiMaio said. “It is modern day slavery. We need to stand up as one human race and demand justice for those who are oppressed. We must be the voice of those who are silenced at the hands of their oppressors.”

The discussion will be held from 7:15 to 9:15 p.m. Wednesday, Nov. 9 in Reed Hall, room 139. It is free and open to the public. FGCU students who would like to volunteer or donate to the organization can sign up on the Wings of Shelter website.