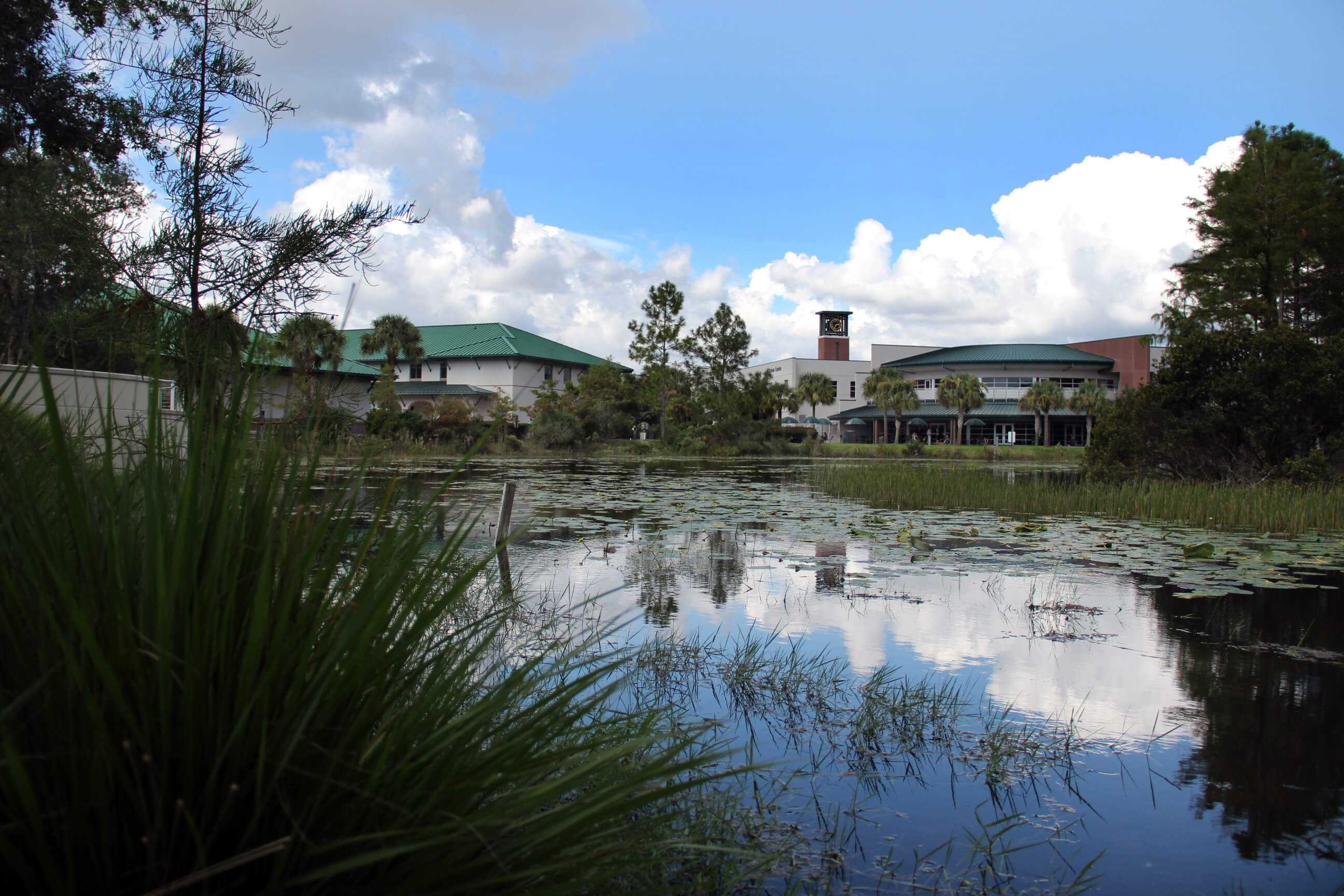 The Cohen Center can be seen on across from one of the many ponds around FGCU's campus. (EN Photo / Kelli Krebs)

You could call it Florida Gulf Coast University’s own Hail Mary, and it’s boosting admissions.

FGCU shocked the college basketball world after beating Georgetown and San Diego State in March. It was the story of the NCAA Tournament, and a whirlwind of media and prospective students began flying into the Fort Myers area.

When asking Chung about FGCU, he said, “I watched with delight as Florida Gulf Coast University made it through the tournament earlier this year.

Although my research paper is about the advertising effect of college football, I am assuming the effect would hold for success in basketball as well.”

The Flutie Effect is based on the 1984 Boston College-Miami football game when quarterback Doug Flutie threw a lastsecond 48-yard “Hail Mary” pass to beat Miami 47-45.

In the following two years, according to Chung’s research, Boston College’s application rates shot up 30 percent. This has been an occurrence at multiple universities after a period of athletic success. According to ESPN, when Northern Iowa beat the top-seeded Kansas University Jayhawks in the 2010 NCAA Tournament, calls to the university admissions office spiked 30 percent. When Butler reached the national title game in 2010 NCAA Tournament, applications went up 41 percent.

So what has happened at FGCU? “At this time we would expect to see an increase in applications and we have,” said Marc Laviolette, the FGCU Director of Admissions. “However it is still early and taking a snapshot of where we are in applications compared to last year at this time is just one point in time and will not necessarily translate into a final percentage increase. We receive applications for next fall starting in September with the final deadline May 1st. At this point we are up in freshman applications by 27%.”

With regards to the Flutie Effect, Laviolette said, “There is a cause and effect between athletic success/publicity and increases in applications. Whether that translates to increases in admission and enrollment is solely dependent on whether or not we see an increase in quality applications and if we can accommodate a subsequent increase in new student enrollment.”

Students at local high schools are starting to look at FGCU differently after March Madness.

“I thought about going to FGCU before March Madness, but I think it became more appealing due to the fact it’s more popular and I like schools with a larger student body,” said Alyx Gonzalez, a senior at Gateway Charter High School.

This hike in admissions is not FGCU’s largest, though. According to Laviolette, in the fall of 2005-06, admissions went up 35%. “We have experienced increases in applications every year since the university opened,” Laviolette said. “My department has always been challenged to keep up with the ever-increasing numbers of applications. I do not think that will change.

We will continue to look for ways to improve our processing to keep up with the numbers. The university is managing the growth rate to ensure that we can accommodate the increases and still offer a quality education. Student success is our top priority and that will continue. We may have to become a little more selective in admissions but not to the extent that we would change our mission and our commitment to Southwest Florida.”