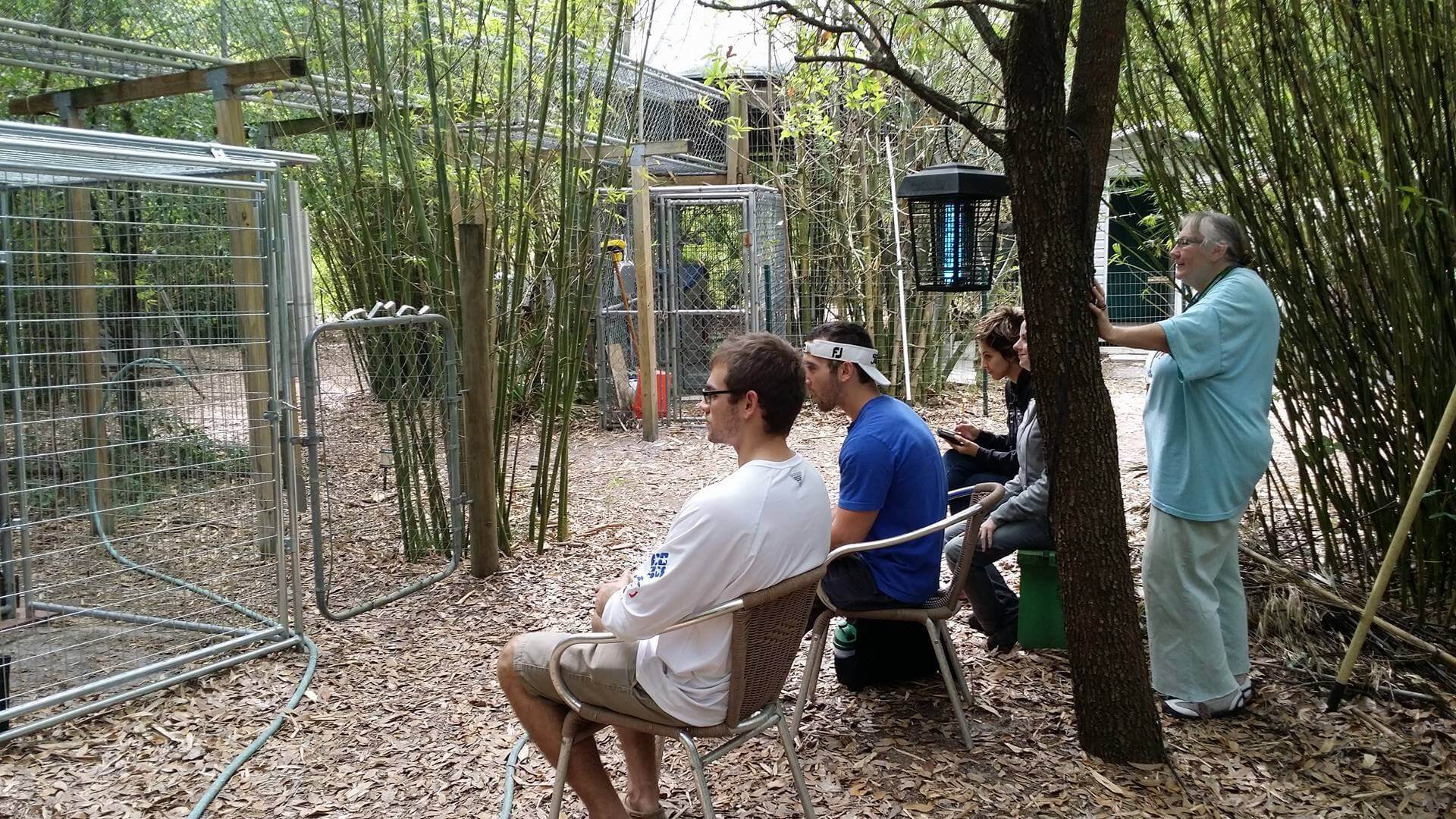 College graduates spend their newfound freedom in different ways, but rarely do they spend it at a primate sanctuary conducting research.

Recent FGCU grad Matthew Henderson has been working at The Talkin’ Monkeys Project, a primate sanctuary in Hendry County dedicating to both rescuing and educating the public on primates and animal welfare issues. Henderson, along with FGCU students Christina Pagan and Gina Cheadle, studied gibbons at the sanctuary and how female gibbon calls impacted behavior and communication between the animals.

“We were researching how variation or just changing the female call changed their behavior,” Henderson said.

Their research began on Dec. 13, 2015 and lasted for 10 days. The group went to the sanctuary once a week every Sunday, give or take a few days missed due to bad weather or illness among researchers. Henderson and his team took a recording of a female gibbon call and changed it, manipulating the order of the sounds and played it back to the animals, noting if there were any behavioral changes and compared their reactions to control calls. The final day of testing was March 14.

“We wanted to take that call and break it up to really understand the structure and order of the call,” Henderson said.

While this isn’t the first observation of gibbon behavior, this is the first research done specifically on the behavioral effects of gibbon calls. A group of field scientists from Germany will be utilizing the call created by the students in a gibbon census count in Vietnam this summer.

“The research went well,” Henderson said. “At the end of the experiment, we didn’t find too much significant results, but when we were actually doing the research, we noted quite a few things the gibbons were doing.”

Henderson found that playing the random call “really tripped them up.”

“They would do a small chirp, acted confused but then got used to it,” he said.

Henderson first learned about The Talkin’ Monkeys Project during his freshman year when he first joined the Wildlife Club. The club had been volunteering there, and once he visited the sanctuary for the first time, he fell in love.

“I went up there and loved the place,” Henderson said. “I’ve been volunteering there for a couple of years.”

He didn’t always want to study primates, however. His main area of interest is reptiles.

Thanks to the research done at The Talkin’ Monkeys Project, Henderson has a better understanding on the scientific research process.

“I’ve never even kind of done research before this,” he said. “This was completely us. We made it. We designed it. We thought of it. All of the basics of designing, implementing and analyzing research I think I have a better grasp of now.”

Henderson has the FGCU biology department to thank for his love of the environment.

“I got to have a really good one-on-one relationship with some of my professors,” he said. “Just being at FGCU and getting to be a student naturalist at the colloquium department got to help me understand how much I love teaching and the environment.”

While Henderson does plan on going back to school in the future for his master’s degree, as of right now, he’s going to dedicate his time in gaining experience in the research field. Next month, he will be traveling to Thailand to intern at the Wildlife Friend Foundation of Thailand, an organization that helps take animals out of the exotic animal trade.

“After that, I’m looking into possible work experiences in Australia,” Henderson said.