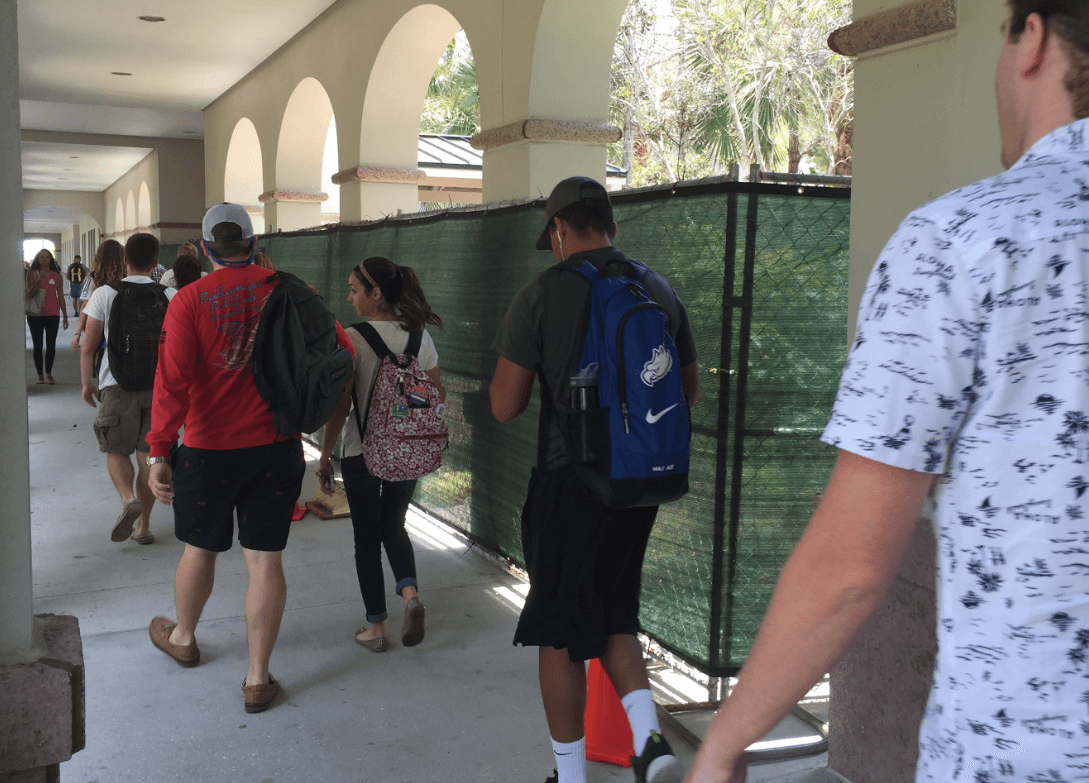 Students walk past the recently barricaded smoking area between Reed Hall and Whitaker Hall, which was closed one month before the smoke-free campus initiative is set to begin. (EN Photo/Kelli Krebs)

The university started construction to enhance three gathering areas on campus to encourage students and faculty to interact. One of the areas is the main designated smoking area on campus between Reed Hall and Whitaker Hall.

Fencing was set around the DSA on April 6, closing it more than a month earlier than the Eagles for Clean Air initiative was set to start on May 9.

“I saw the stars align,” said Tom Mayo, the director of facilities planning. “We were told the smoking policy was going to take an effect on May 9, and we saw this as an opportunity. I’ve been looking for an opportunity to create additional gathering areas.”

All faculty and staff members received an email on Tuesday, April 6 with a notification about the start of construction. However, the email wasn’t sent to students.

Collin Wellenreiter, a junior at FGCU and a smoker who frequented the DSA by Reed Hall and Whitaker Hall, said he would have liked to been notified of the construction project.

“I find it very unjust that the DSA was shut down a month earlier,” Wellenreiter said, “especially without notice of any sort. I know that smokers aren’t respected too much on campus, but having the decency to inform us of the early removal of our communal area would have been nice.”

Mayo said although the DSA is being displaced and no other DSA is being established to replace it, “smokers are free to find other designated places in the interim.”

Mayo said he sees these constructions as an extension to the landscape project done to the library lawn in 2014. He said he wanted more outdoor seating since the academic buildings on campus don’t have a lot of sitting area inside.

“We knew that we were going to have these smoking areas converted,” Mayo said. “So, we looked at the opportunity to take the areas and enhance them to have a comfortable place to sit and interact.”

The project will be funded by the university. Mayo said the total project construction cost is “around the $170,000 range.”

The construction on the former DSA involves enhanced planting, pavers and additional bench seating. Screening will also be added to separate from the service area behind it.

“We just want to make it a better environment,” Mayo said.

The other two areas under construction are in front of Alico Arena and behind Howard Hall.

The one by Alico Arena is to the left of the main entrance, in front of the auxiliary gym. This area is currently being used to park golf carts. Mayo said they intend for that habit to stop.

“That is an area where a lot of people congregate before and after events,” Mayo said. “There’s some nice shade in there, but it’s mainly just dirt. So, we want to enhance that area as well.”

As far as enhancement goes, low shrubs and tall grasses will be planted and a few palms will be taken out. Also, pavement and benches will be added to encourage interaction.

“There’s a lot of pedestrian traffic along the angled walkway, so we want to provide public seating,” Mayo said.

The contract started Wednesday, April 6 and is scheduled to finish by the beginning of summer on May 6. The Eagles for Clean Air non-smoking policy is set to start May 9.