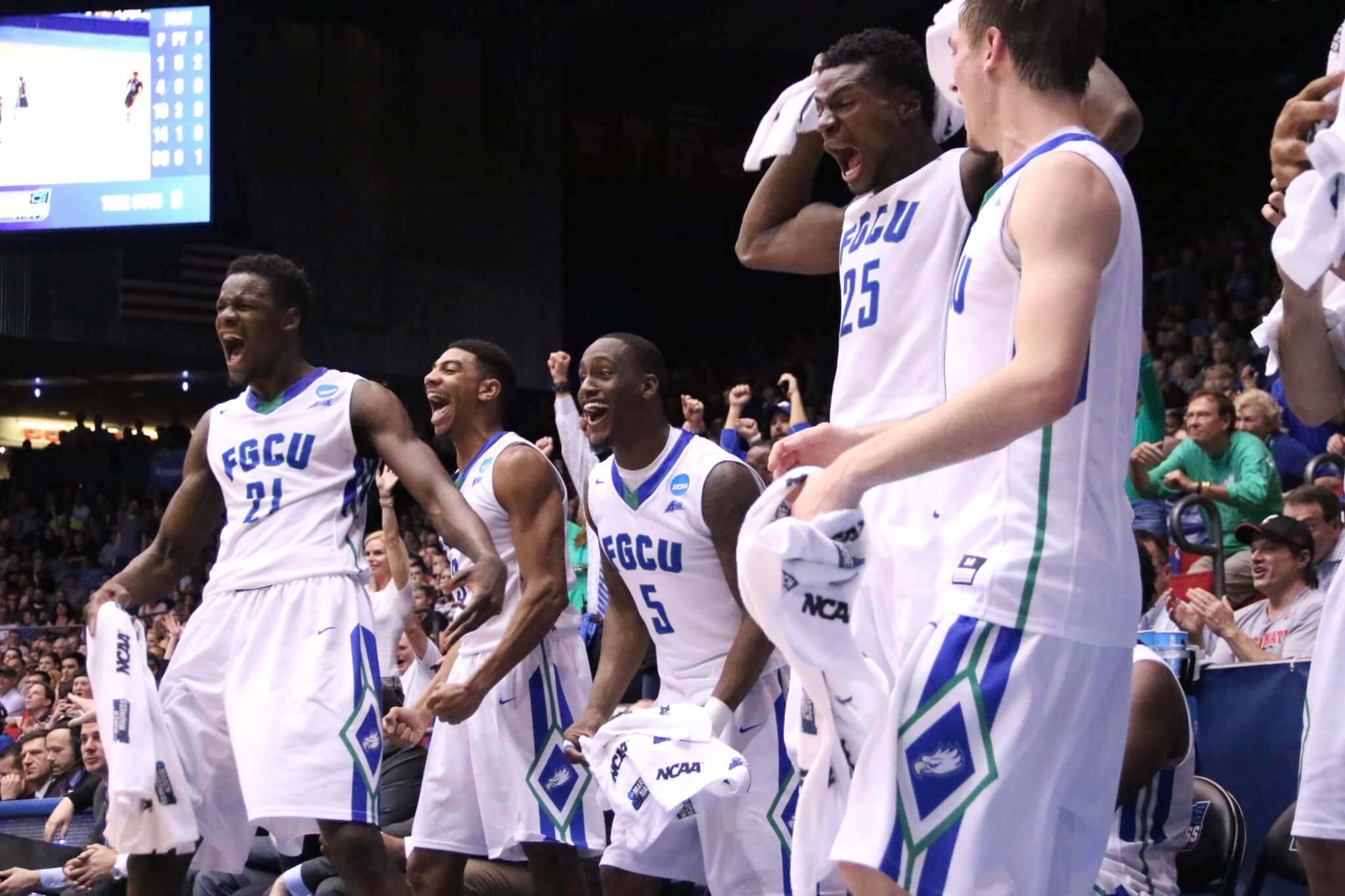 The FGCU men's basketball team celebrates a dunk from Bryan Greene Jr. in the final minutes of the First Four game between FGCU and Fairleigh Dickinson on Tuesday. (EN Photo / Kelli Krebs)

DAYTON, OHIO — They did it. The FGCU men’s basketball team has found another win in the NCAA tournament.

FGCU defeated Fairleigh Dickinson University 96-65 on Tuesday evening to open up the NCAA tournament and earn the No. 16 seed in the East bracket.

FGCU opened the game with an alley-oop, electrifying the gym. Momentum stuck with FGCU for the rest of the night.

“Coach drew up the play, and we just executed it as he drew it,” forward Marc-Eddy Norelia said. “We stuck to what we were doing all year. It works for us.”

After five minutes of play, FGCU held the lead 13-3, a lead it would have all night.

By the half, the Eagles held a 21-point lead over FDU.

Where the Eagles faulted was at the free-throw line. The team shot 35.5 percent from the free-throw line during the first half where it typically averages 64.7 percent. In a tight game, this would have been a problem but not in the double-digit show fans saw Tuesday.

“I thought the guys did a nice job,” FGCU head coach Joe Dooley said. “We had a few slip ups (that) you’re always going to have. I thought we played well and shot with confidence despite not shooting well from the free-throw line.”

Coming out in the second half, FDU hit back-to-back three-pointers. FGCU squandered the momentum with easy finishes on the offensive end.

FDU didn’t lay down. It put up 46 points in the second half.

FDU had four fouls at the 16:40 mark, continuing the physical trend from the first half. By this time, four of FDU’s five second half starting players had more than two personal fouls.

FGCU was able to play both physical and smart, keeping fouls to a minimum.

With 10 minutes left in play, FGCU held a 23-point lead. Movement up the floor was easy for the Eagles against FDU’s extended press.

The remainder of the game was played with even tempo, but FDU couldn’t bring the game close enough to make a difference.

“What we want to take about all this is we had one hell of a season,” FDU sophomore Marques Townes said. “We had one hell of a run. We fought hard all season, and we accomplished our goal, which was to get to the NCAA and play in March Madness. And, we just happened to come up short, but that doesn’t diminish our season.”

Ninety-six points allowed is the most points FDU has surrendered all season, tied with its loss to Army earlier this season, 96-85. In addition, FGCU’s final 96 points broke the NCAA record for most points in a First Four game.

Up next, the Eagles will take on No. 1 UNC in Raleigh, North Carolina on Thursday evening in the First Round of tournament play.

“We’re very blessed to be here,” sophomore Christian Terrell said. “We’re excited for our next game. We are just going to continue to play our style of play. We’re going to be ready.”

This is FGCU’s second time in the NCAA Tournament after making its legendary Sweet Sixteen run in 2013, birthing Dunk City. FGCU has only been Division I postseason eligible since 2011-12, and this will be the Eagles’ fourth postseason appearance.