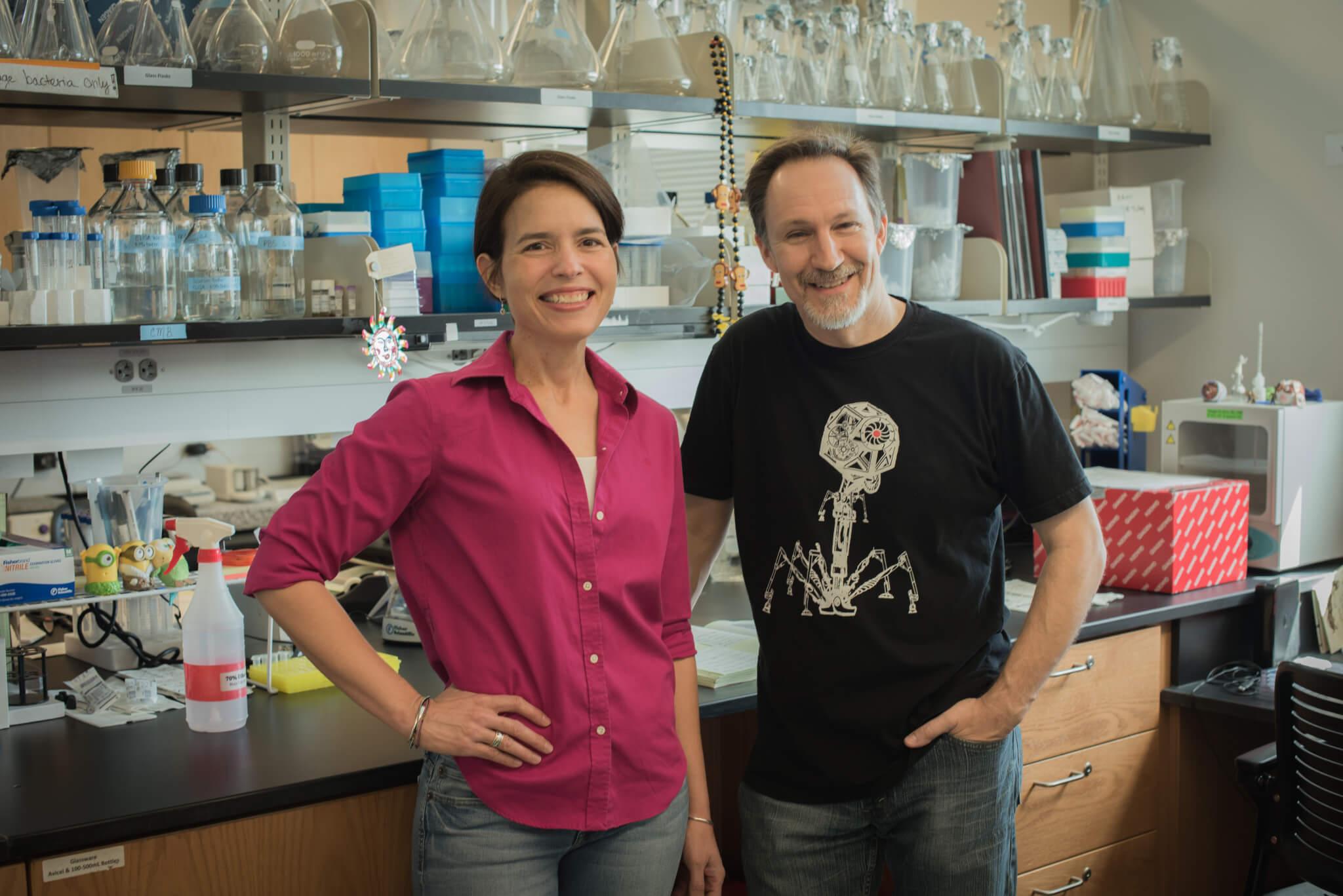 If anybody knows the nuisance mosquitoes can be, it’s the scientists working behind the scenes to study the viruses – like the currently prevalent Zika virus – that these insects carry.

Two of those scientists are right here on the FGCU campus: Sharon Isern and Scott Michael. Not only are they both scientists and professors in the department of biological sciences, but they’re also husband and wife.

With funding from the National Institutes of Health, one of the world’s foremost medical research centers, the work Isern and Michael are doing is not only relevant here in the southwest Florida community, but also far-reaching.

They’ve been married 26 years and have a son named Nico who is dual-enrolled at his high school and FGCU.

The professors met while studying at Johns Hopkins University – Isern in her senior year of her undergraduate chemical engineering program, and Michael a third-year graduate student studying chemistry.

Among many others, one of their mutual interests is the study of viruses.

“They’re cool little organisms,” Michael said. “They’re fantastic – they infect things and do it in a different way – and have cool ways of reproducing.”

The virus the couple has been studying the longest – since the year 2000 – is the dengue virus. Dengue is transmitted through mosquito bites and affects as many as 400 million people yearly, worldwide, according to the Centers for Disease Control and Prevention.

The dengue virus is closely related to the Zika virus, so Isern and Michael have been able to apply a lot of what they know about dengue to develop new ideas for Zika.

There is still a lot that is unknown about Zika, but with funding to develop new vaccines and inhibitors, as well as having patents on two dengue inhibitors, Isern and Michael are busy doing what they can to help understand and combat these viruses.

Between research, grants, lab work and teaching, these professors have plenty on their plate, but they love what they do.

“I worked in the field before teaching, but as an engineer there was little room for creativity,” Isern said. “I felt stifled and wanted to explore creativity, so I decided to get my PhD. Scott asked me, ‘Are you crazy?’ – he had just graduated from grad school and now I was entering.”

Carley Gray, a senior majoring in biology, was recently certified to work on viruses in the lab.

“They let you do your own thing,” Gray said. “If you have an idea for something, they want you to solve the problem. In grad school, they’re not going to sit there and tell you what to do, so I feel like it’s really preparing us.”

Amanda Tan, who recently graduated with her bachelor’s degree in biology, has been working on the Zika virus since February of this year and has had the opportunity to work with the Florida Department of Health.

“We have really awesome opportunities to do real science,” Tan said. “We’re not just washing dishes; we’re doing all the work. It’s a lot of fun and [Isern and Michael] are great to work with. They’re so encouraging, and they really want to give us opportunities to succeed.”

Since the professors’ arrival at FGCU in 2004, they’ve revamped the introductory biology course and created an entirely new course as part of the Honors program called “Virus Hunters.”

It’s a year-long research-based course where undergraduate students start collecting environmental samples from day one and spend the first semester isolating a unique virus. During the second semester, the viruses are fully genome-sequenced, similar to the human genome project.

“It’s all discovery based – it’s not a canned lab; it’s not, ‘here’s a protocol, go to it.’ It’s about discovery,” Isern said. “What is the virus called? What does it do? As an outcome of their research, they end up being student authors in a public database of all known sequences, which is pretty cool.”

When Isern first came up with the idea to do a class focused on viruses, she did research to see if there were similar classes being taught elsewhere. She came across a program called the Science Education Alliance-Phage Hunters Advancing Genomics and Evolutionary Science program, SEA-PHAGES for short.

“Phage” is short for “bacteriophage,” which is a virus that infects a bacterium. The SEA-PHAGES program is administered in part by the Howard Hughes Medical Institute. The program offers a curriculum for the exact kind of class that Isern was creating, so she got FGCU in as a participating university in 2013.

Since then, she and Michael were two of four professors asked to return to train incoming faculty facilitators.

FGCU is one of 125 participating institutions, with well-known universities such as Brown and Johns Hopkins involved as well.

“It’s gone from a novelty, to a mainstream approach to teaching science,” Michael said.

When Isern first started teaching the class, she co-taught it with Lyn Millner, an associate professor of journalism – her work inspired Lyn’s husband, Jesse Millner, an Instructor in the department of language and literature, to write a poem called, “Viva las viruses.”

“Sometimes I understand a little and sometimes I don’t understand very much, but I do understand that they’re doing cool and important stuff,” Jesse said. “They’re really smart and really good at what they do.”

With decades-worth of research on viruses, Isern and Michael have a love for science that’s clearly shown in all the different work that they do and those they work with, but at the end of the day, it’s the love of discovery that keeps them going.

“People get really into it – science and the love of discovery and the curiosity that’s behind that can take over your life and consume you,” Michael said. “But it’s kind of a good thing – when you find something that you’re passionate about – the things you can discover that no one else has ever in the history of anything discovered, and you figure them out yourself? That can be a very alluring pastime.”