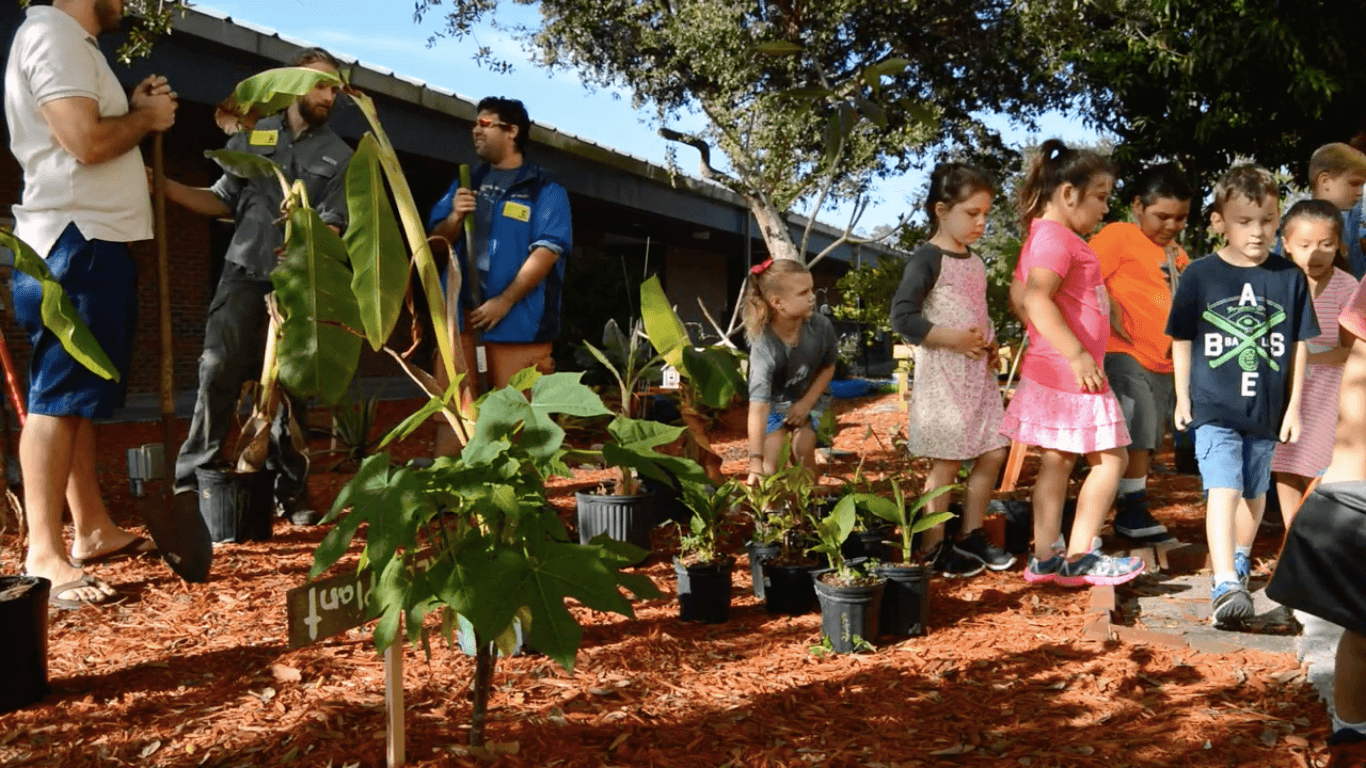 The children of Pinewoods Elementary in Estero were excited to help beautify the garden at their school on Monday, Nov. 7.

About 20 kids joined a group of FGCU students working on their Intermediate Senior Seminar project, which educated the children about gardening and better irrigation techniques by planting a banana circle.

“We want to give the kids an example of polycultures,” Eric Parker, an FGCU student, said. “When we plant this way, it emphasizes diversity so that the plants mutually benefit each other.”

The garden started back in 2007 when Jane Swedish, a teacher at Pinewoods Elementary, along with a coworker who has since left the school, decided to bring gardening education to children so they could “see things grow.”

“Initially, the garden intended to be a five senses garden,” Swedish said.

They had plants the children could touch and smell to feel the differences between them. Over the years, it has developed into a more agricultural and educational program, although the area has grown smaller.

Although understanding how our agriculture systems could improve by diversifying the ecosystems so plants work for each other instead of denigrating our soils by cultivating the same crops over and over, it is not a common topic for elementary students and classrooms.

Ms. Swedish wants to bring some kind of environmental education to her students.

“I want the children to be able to get out doors, touch the soil, be close to the environment and know how to respect it,” Swedish said, “So that, someday, hopefully they can grow their own food.”

The garden at Pinewoods has bamboo, two mangos, tangerine, guava, rosemary, sunflowers and more. There are plans to start growing lettuce and tomatoes soon.

However, raising the garden and creating a serious project out of it hasn’t been an easy task.

The garden doesn’t receive any grants from the school and Swedish has to find funding for her projects with the community.

Local garden clubs give her small grants, but she has also asked for help from big companies.

She has even received grants from companies like Walmart and Lowes.

She maintains the garden with funding through the community, especially parents.

After the coworker she started the garden with left the school, it’s been difficult to find someone with the passion to help with her project.

That’s why Swedish says it’s important for her to get the kind of support she gets from FGCU students and programs such as the Pinewoods Elementary PTO, which makes the relationship between parents and school staff more productive.

The Intermediate Senior Seminar course at FGCU, and support from professor Courtney Satkoski, has been crucial for the survival of the garden.

Swedish says she couldn’t make it without the FGCU students who help her every semester and that she has found an ally in Eric Parker, who led the Intermediate Senior Seminar group that’s helping with the garden.

Swedish says she’s been working with Parker in environmental projects since he was a boy.

Parker actually attended Pinewoods Elementary and now, as an FGCU student, is a coordinator at the FGCU food forest.

Parker is promoting the system used at the food forest, permaculture, to be used on the Pinewoods garden.

It’s a system that emphasizes in not replanting. The plant continuously grows and the longer they are there, the more they produce. Parker wants the project to provide stable root systems and teach the children about year-long systems for agriculture and food.

Alex Miranda, another FGCU student working to beautify the garden at Pinewoods, says that the importance of the project is to create a hands-on experience for the children, to get them to understand the process and the work it takes to bring food from seed to table.

“The children are our future and for them to have this early exposure, it helps them have a sense of place,” Miranda said.