FGCU signs up for recycling competition among US and Canada schools 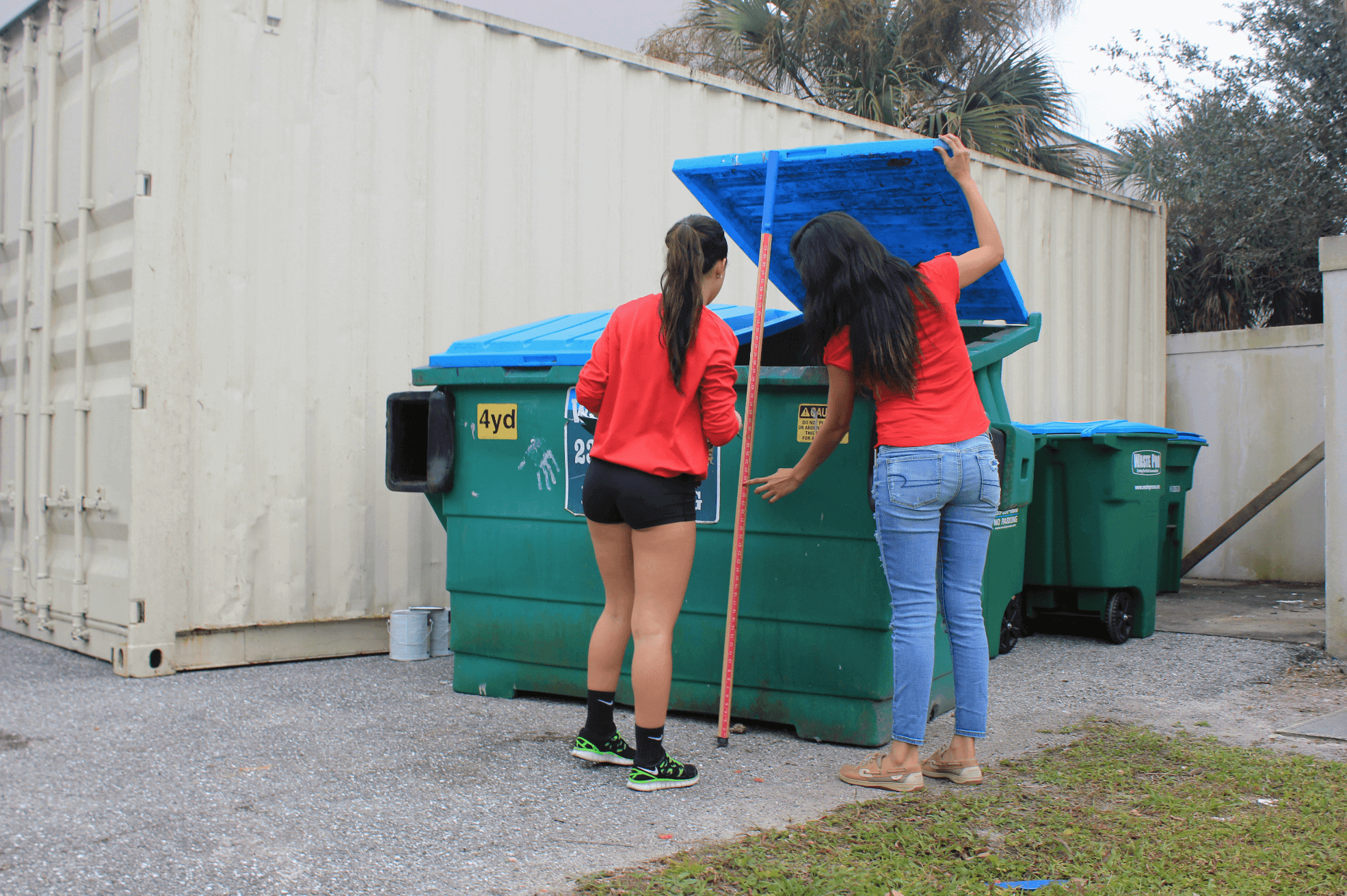 Students from two colloquium courses examine all recycling bins at 5 p.m. every day except for Saturdays, to measure and document how much the university recycled that day. (EN Photo/Jimena Tavel)

Alyssa Stefanie Rodriguez signed up to grab a long measuring stick and walk around campus to measure the height of garbage bags this semester.

“It’s not really gross because I’m just measuring. It’s pretty easy,” said Rodriguez, a senior marketing major and a colloquium student who is volunteering with Recyclemania.

This is FGCU’s seventh consecutive year participating in Recylcemania. The competition began on Feb. 7 and will last eight weeks. Student Government and the Physical Plant have partnered in the project.

Rodriguez is one of several students in one of the two colloquium courses that are helping out with Recyclemania. Students in these courses are required to complete 10 hours of service learning to pass the course.

Sarah Stauring, a junior biology major and the SG coordinator for Recyclemania at FGCU, became the teacher’s assistant in both of the colloquium courses taught by Jessica Phillips so that communication ran smoothly with the volunteers.

These student volunteers record the height measurements every day of the week except for Saturday.

The Physical Plant uses the height measurements of the trash bags to calculate its volume quantities using a standard mathematical equation provided by Recyclemania. Then, they enter the volume quantities into a spreadsheet that acts as a conversion chart and calculates the weight of the bags. The Physical Plant also provides the long ruler used to measure the bags and some promotional items for awareness.

FGCU has signed up to participate in four categories out of the seven that the competition offers.

One of these categories is the Stephen K Gaski Per Capita Classic, in which schools compete to see which can collect the largest combined amount of recycled paper, cardboard, bottles and cans on a per person basis.

Another category is the Gorilla Prize, in which schools compete to see which can recycle the highest combined amount of recycled paper, cardboard and bottles and cans regardless of campus populations.

Another category is GameDay: Basketball, in which schools compete to see which can have the highest combined amount of recycled paper, cardboard and bottles and cans compared to waste amount. FGCU has chosen Feb. 18 as the game day.

The last category is the “Tell your story” Case Study Competition, in which schools submit a brief write-up and photos detailing an activity or other effort that promoted recycling or waste reduction.

“(For this category), we’ll just submit everything that we’ve been doing to promote,” Stauring said.

Stauring said the students involved from SG and the colloquium courses have been tabling at basketball games, the farmers market and on campus in general to promote awareness.

“They will do a synopsis at the end and get students’ opinions,” McConnell said. “They can do a compilation of their marketing efforts.”

The main activity Stauring and other volunteers have done so far to promote recycling that they will submit for the “Tell your Story” category was a dumpster drive activity on Feb. 11. This activity consisted of exposing how much the university recycles. Sara Lopez, a volunteer, put on a protective suit and climbed into dumpsters to bring trash bags to the library lawn. Then, Perez and other volunteers laid the trash on a tarp, and they proceeded to separate it between recycling and waste so that the public could see why the university needs to improve its practices.

The results of the competition will be announced April 15. FGCU has not won anything in this competition before.

“What we get is the experience of students seeing what we could be getting out of recycling,” McConnell said. “It’s about education.”