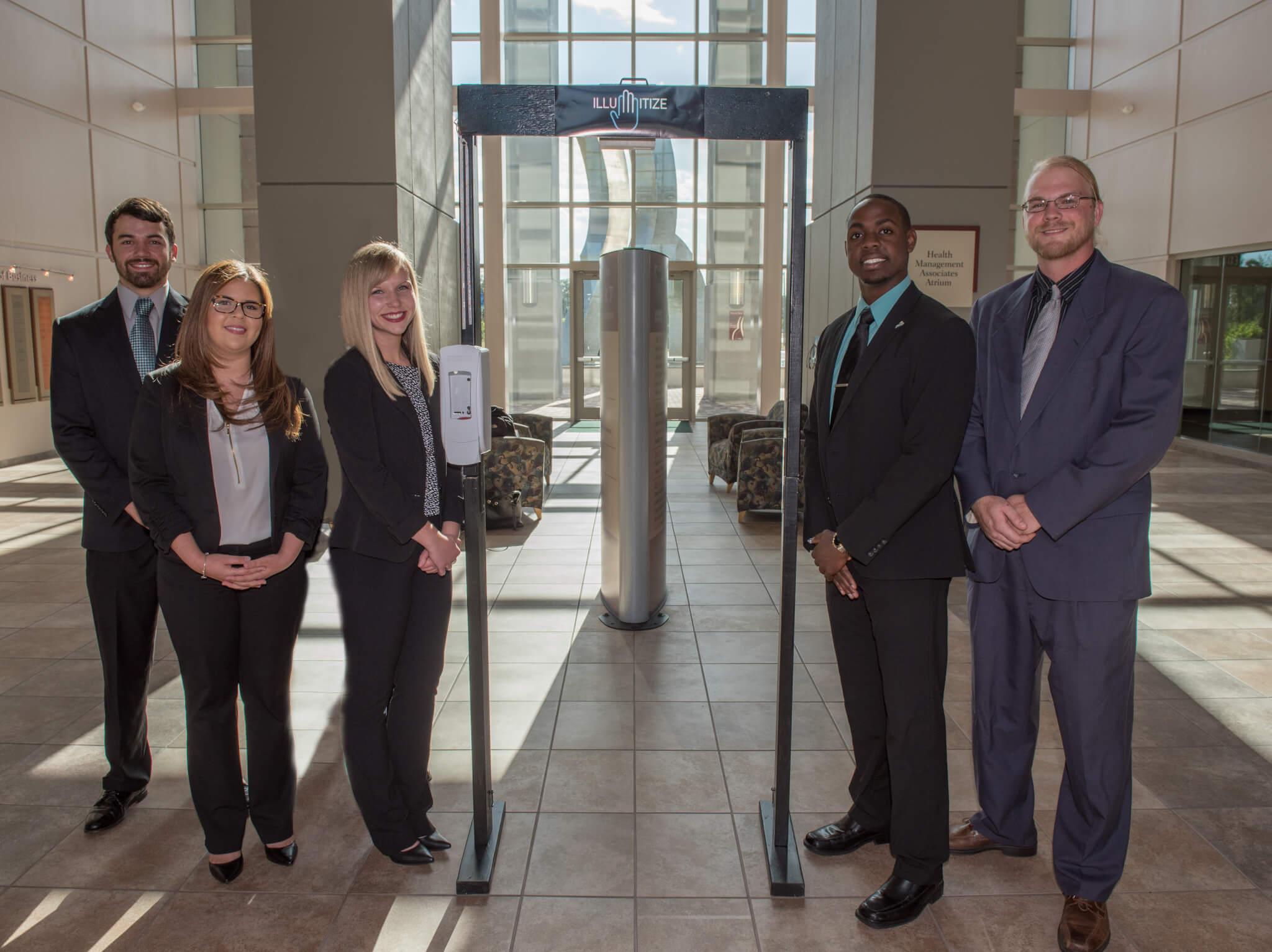 While there are numerous classes offered at FGCU, only one allowed a group of four engineering students and one alum to create a startup business that will beta test their device at Lee Health’s HealthPark Medical Center.

ENT 3114, or New Venture Lab, which has an engineering CRN, challenges students to come up with a solution to a common problem, and develop a business to fix said problem.

ILLUMITIZE is a visual alert system that is designed to increase hand hygiene compliance in hospitals and other health care facilities created by Whitaker College of Engineering students Brian Bradley, David Fleck, Joseph Mukuvi, Allison Sundermeier and FGCU alum Dixibeth Villarraga. It stemmed from a simple conversation in September 2015 with a professor in the nursing program at FGCU.

“She’s the one who gave us the initial idea,” Sundermeier said.

Sundermeier and her colleagues began working on the project that month. By summer 2016, she was talking business with HealthPark Medical Center Chief of Patient Care Donna Giannuzzi.

“The first conversation was back in July,” Sundermeier said. “Then I had a phone conversation with her at the end of August 2016.”

On Thursday, Sept. 29, Sundermeier met with Giannuzzi and Lee Health System Director of Epidemiology and Infection Prevention Steve Streed and discussed how ILLUMITIZE could be beta tested at their facility.

ILLUMITIZE consists of six physical prototypes, which will be installed in HealthPark Medical Center in late Fall 2016.

Katarina Danks, the Marketing Coordinator for the Institute for Entrepreneurship at the Lutgert College of Business, said that the ILLUMITIZE team is most likely the most successful student group that has came out of New Venture Lab.

Danks also hopes for Sundermeier and her colleagues to spread awareness of the IFE as well as spark inspiration for future students.

“We hope to see that more in the future with more student groups,” Danks said, “and take their student projects and then develop them into an actual working and successful business venture.”

Pending approval from Lee Health’s institutional review board, a committee responsible for reviewing and approving research involving human subjects, the team behind ILLUMITIZE will be able to test their prototype and advance their testing to provide results in the effort of increasing hand sanitization.

“We’re just trying to establish proof of concept,” Sundermeier said. “We want to see if our device actually does increase hand hygiene compliance and have an effect on that.”

Sundermeier has benefited from working on this project in multiple ways.

“Getting to work with business students was definitely beneficial for my future career,” Sundermeier said, “because an engineer doesn’t work alone.”

I’ve gotten to publicly speak at competitions,” Sundermeier said. “I’ve been able to be in contact and meet professional people that I probably wouldn’t if I wasn’t involved in this project.”

ILLUMITIZE’s device could potentially help reduce healthcare-associated infections, which are responsible for 270 deaths nationwide every day. Sundermeier is looking forward to the possibility.

“I’m excited to get the data,” she said. “We can’t really do anything unless we can prove that our device actually does something, so I’m just excited to see what the study shows and from there we’ll be able to market because we have data to prove that.”