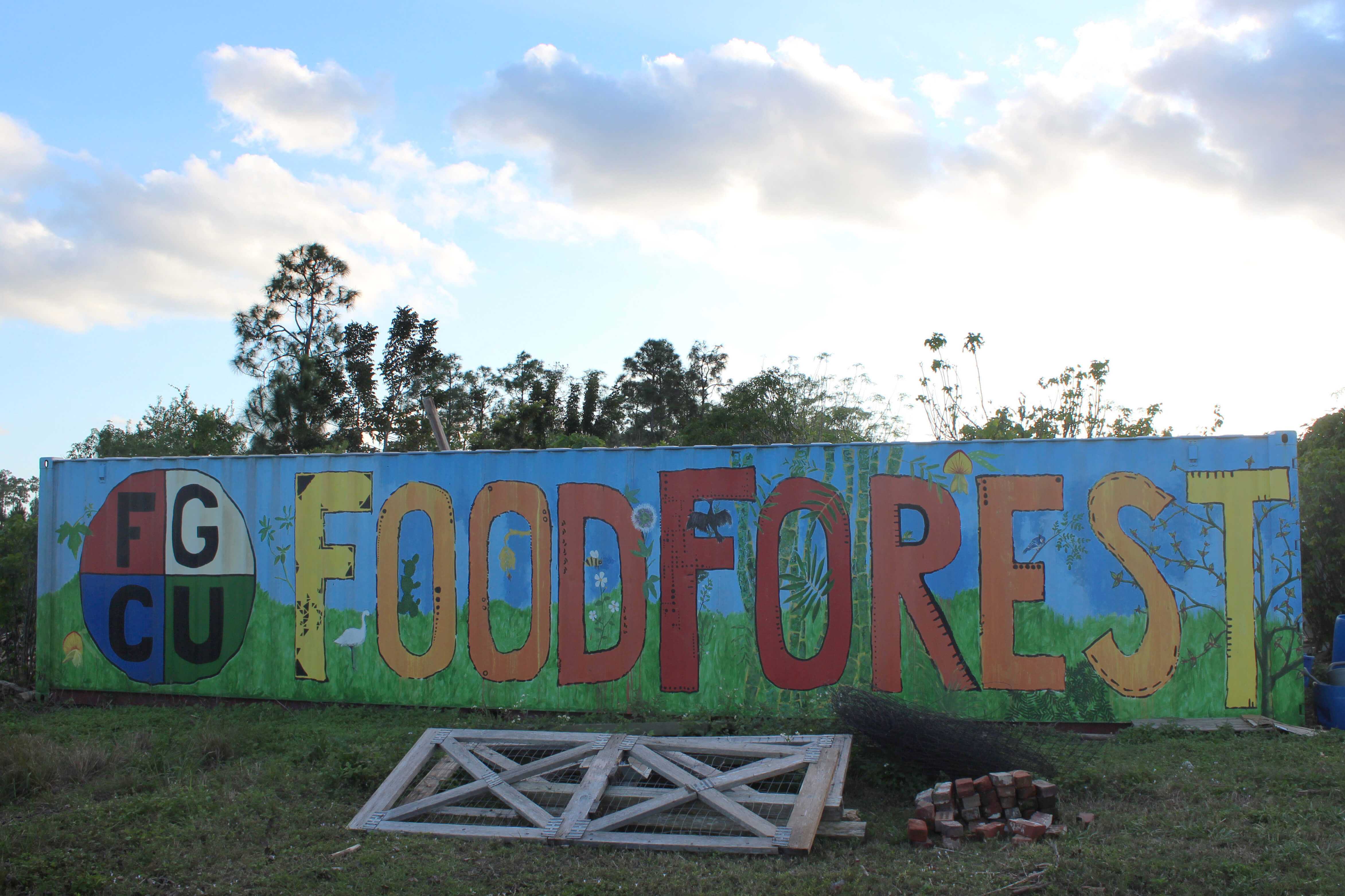 The student-run Food Forest at FGCU is free and open to all students of the university.

The end of the Aramark dining contract has brought a new beginning to FGCU — the beginning of Real Food.

The Real Food Challenge was founded in 2008 and was brought to FGCU in 2012. It is a studentrun movement with an aim to increase the amount of locally grown, ethically humane food that universities purchase to at least 20 percent of their food budgets by the year 2020.

James Till, an FGCU student and RFC member, sat in on presentations by prospective dining services for FGCU before Chartwells was officially selected. Till said he was drawn to Chartwells because the company already has a corporate contract with the RFC.

“No matter what institution they are providing food for, they at least meet that minimum 20 percent across the board,” Till said. “With us specifically, Chartwells has actually gone above and beyond by saying that within their ten-year contract they actually hope to get us to 60 percent.”

If Chartwells were to successfully spend 60 percent of the FGCU food budget on sustainably grown and ethically gathered food, FGCU would have the highest national percentage of RFC-approved food in its budget. Oberlin College in Ohio, Warren Wilson College in North Carolina and University of California, Santa Cruz have the highest percentage listed on the Real Food Challenge website, at 40 percent.

Senior Lori Boegershausen joined FGCU’s RFC last semester and is now a member of the national organization’s standards council. Boegershausen said she joined the group for the opportunity to create change.

“You, as a student, are putting your dollar where your food is and, therefore, supporting a just and fair food system, whether that’s fair for the workers, fair for the environment, fair for us as consumers,” Boegershausen said. “That’s what really struck me.”

According to Till, the RFC was introduced to President Wilson Bradshaw in March 2015, but Bradshaw has yet to sign the RFC contract. Till and Boegershausen will meet with Bradshaw within the next couple of weeks to ask him to officially add FGCU to the list of RFC universities.

“Especially with the recent changes in our mission statement in regards to sustainability, this push really needs to be made to reinforce our leadership position in the state, especially amongst our sister institutions,” Till said. “I would just like to see really FGCU doing more on a contractual basis that can be measured, and they can be held accountable for in terms of sustainability and social justice.”

The Chartwells contract guarantees that FGCU will follow RFC guidelines, regardless of whether Bradshaw signs the RFC contract or not. FGCU’s RFC members have been gathering support on campus since 2014. Till said Student Government, Faculty Senate, Staff Advisory Council and the deans of several FGCU colleges have agreed to support RFC. Boegershausen said it was important for FGCU to have universitywide support, to avoid the bureaucratic pitfalls that have caused the RFC movement to fail at universities such as the University of West Florida.

“They went through their faculty, and when they started to make a little bit of change and they got push from administration, automatically, it got shut down because those faculty members were afraid they were going to lose their jobs,” Boegershausen said. “Having this collaborative effort shows more power. Instead of being, ‘Here’s one voice that you can easily silence,’ it’s ‘Here’s multiple voices that won’t be silenced.’”

Till hopes to see the RFC spread to other universities, but he does not think it’s a realistic goal for all universities.

“There might be some where it can’t be as sustainable,” Till said. “I think my goal for RFC overall would be global outreach.” Both Till and Boegershausen plan to stay involved with the RFC, at least in the short term, after they graduate from FGCU.

“Coming from Jessica Rhea herself, the best part about doing service I think is the impact it makes in your own life and how it really changes how you see the world,” said Till, quoting the professor who taught the Civic Engagement course that introduced him to the RFC. Boegershausen said the experience taught her the importance of making both individual and global changes.

“There can be no university without students,” Boegershausen said. “If the students want something, it can happen. It just takes a mass effort.”