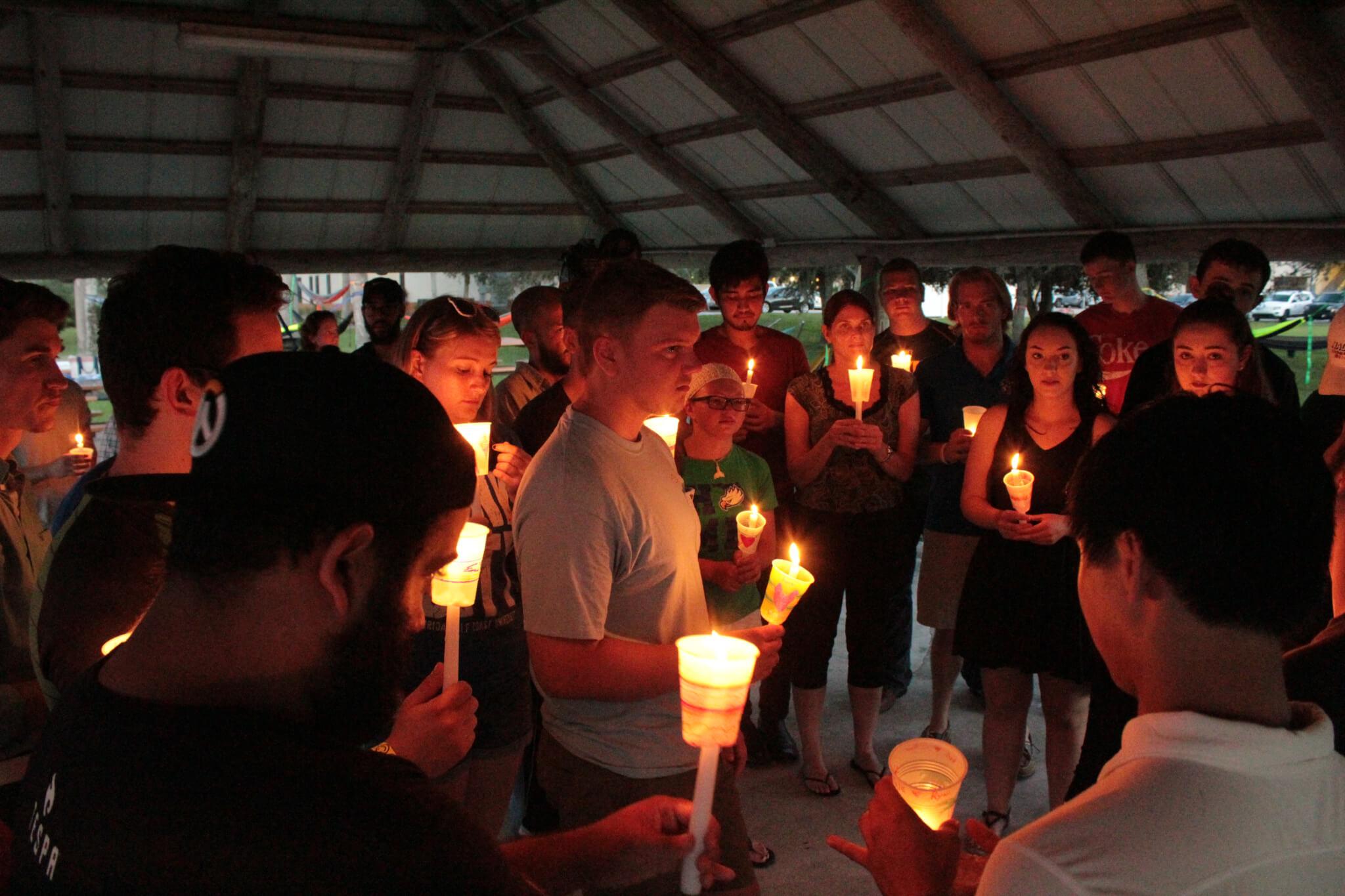 Guests saying final words before blowing out their candles. The vigil was held so that friends who couldn't make it to the funeral could have their last goodbyes. (EN Photo / Georgette French)

On Oct. 1, at the chickee hut near the waterfront at FGCU, family and friends held a vigil to remember Ryan Wendler.

Wendler, 20, died when he was hit by a truck on Sept 20. in a car accident on the intersection of the Michael G. Rippe Parkway and Briarcliff Road.

According to Zachary Milos and Ryan Depontbriand, Wendler hadn’t picked up his phone or responded to messages on social media which was uncommon for him.

A wide-shot of guests at the Chiki hut located on the waterfront. Over 40 people were in attendance including friends, family, and FGCU staff. (EN Photo / Georgette French)

“Before we heard the news, we had known he was missing and then someone sent an article out to the group chat that mentioned his car, so I was trying to be optimistic, but that’s when I knew – and then we got the official notice,” explained Milos.

Depontbriand was at work at the time and mentioned that Wendler never arrived to his destination and that one of Wendler’s younger brothers called him and told him the news hours later, remarking that they sat on the phone in silence and shock.

Wendler’s car was hit from the back by a Mack truck and pushed off the road into the grass embankment. He died shortly thereafter, and was buried a few days later.

The funeral was held that week in Gainesville, but because many students couldn’t make the drive there, the family decided to hold a vigil on campus so that students had the opportunity to say goodbye.

The vigil started at sundown with over 40 people in attendance, including FGCU administration, most of the Quidditch team and Wendler’s family.

The service began with family and friends decorating small cups which they later placed candles in before talking about their memories of Wendler.

Some of the speakers included Carol and Chris Wendler, Ryan’s parents who thanked students and family for their support, Wendler’s grandparents Donald and Joan Alton, Wendler’s ex-girlfriend Kelly Whitesides-Bramlet and Caroline Waterman who was Wendler’s best friend.

“He was such a goofball. I loved that about him. He didn’t get embarrassed; he was so loveable, sweet, funny and smart. He was all around, just good,” said Whitesides-Bramlet when asked about what she remembered most about Wendler. “And I’ve been trying to figure out a time when Ryan wasn’t a good person, and I just can’t. He was such a good kid.”

Donald Alton, who had painted his nails blue and green in support of the school Wendler attended, and his wife Joan also had stories to tell – specifically about how outgoing, goofy and loving their grandson was.

“When he visited our house in Iowa City, the first thing he did was he pulled in the driveway, got his long board out, decided to go flying down the hill and wiped out and broke his thumb,” Joan Alton laughs as she tells the story, “It’s so typical Ryan. He was so full of life.”

Aiden Strawhunn holds the decorated cup she made for Wendler’s vigil. Each guest was asked to decorate their cups in a way that reminded them of Wendler. (EN Photo / Georgette French)

Despite the tragedy, students and family say that Wendler’s death has helped them come together.

“We spent time together once or twice a week, and after it happened, we spent everyday together. The way we interacted with each other brought us closer,” Milos said, “Every moment he had was genuine, and even the bad moments felt pure. He was a human being that I would have chosen to be like.”

Many guests said that Wendler was compassionate, loving and charismatic.

“You just needed to know Ryan for a little while, and you knew who he was. You were hooked and was going to be a part of you,” said Waterman.

The service concluded with the song, “Don’t Stop Believing” by Journey, led by Waterman and Wendler’s family.

Afterwards, guests expressed their condolences while they spoke about Wendler and the legacy he leaves behind.

Wendler’s family and friends want people to remember his story and who he was. In talking about how many lives her son has touched, Carol Wendler was amazed at the support she received from strangers who knew her son.

“There’s this huge ripple that has gone so far. I don’t know you, and it’s a gift in a way because you see how the world sees your child. And I hate that this is how we got that, but it’s precious. And I’m so glad that he was who he was.”

The family thanked everyone for the support, but remarked that Wendler’s death is still very fresh in their minds.

“It’s day by day. There’s been enough to keep everyone busy,” added Joan Alton, “It’s hard, but you have things to divert your mind. I think the hard thing is going home and it being quiet. Even at dinner last night, it was just the two boys and there was one missing.”

She mentioned that the family has always been close-knit, and now there is an unfillable gap where Wendler used to be. Regardless, both grandparents insist that Wendler would want the family to keep their heads up.