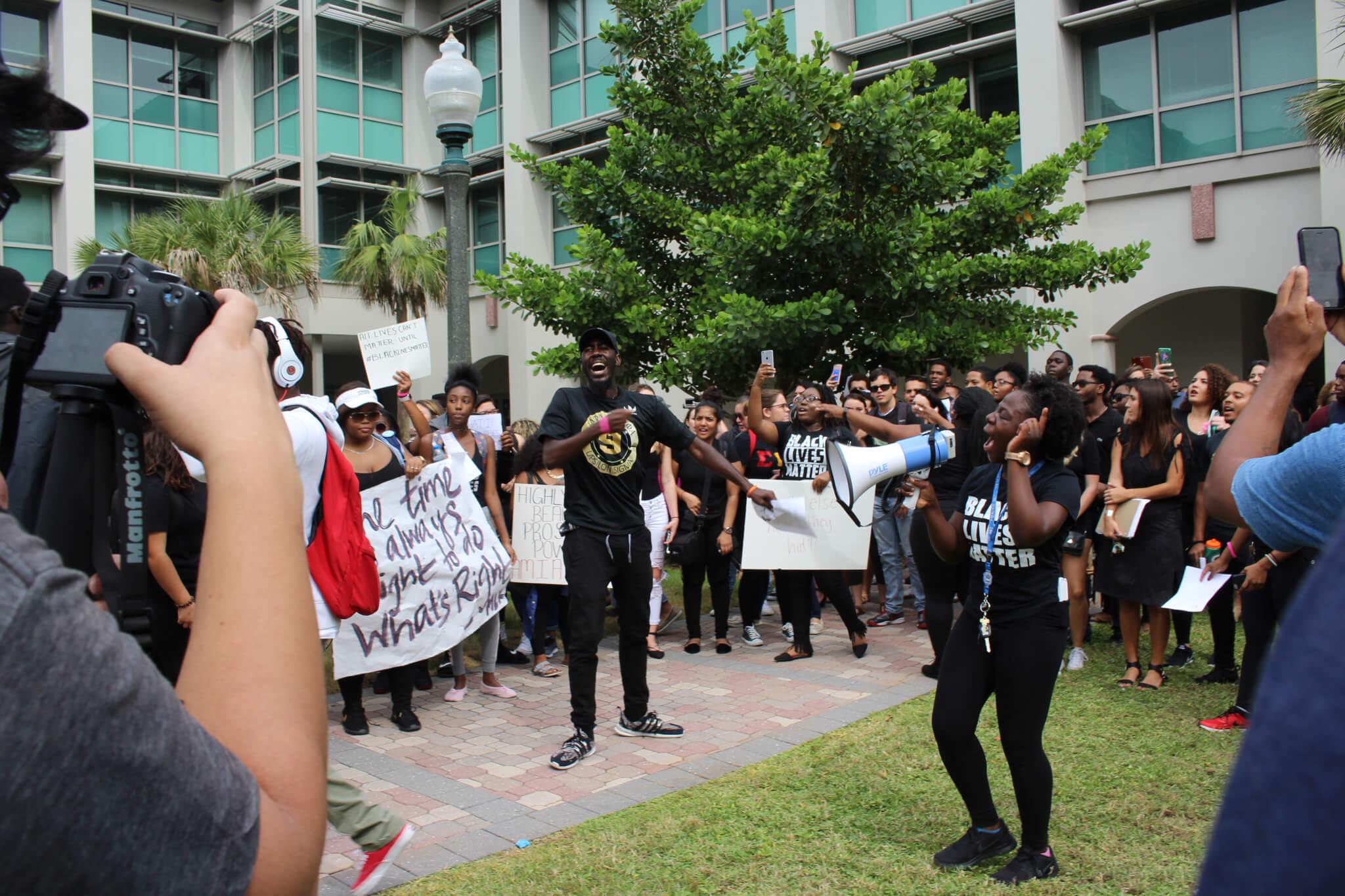 In the FGCU student plaza, students rallied in protest of the racial slur found on a classroom whiteboard in Seidler Hall.

A sea of students, wearing all black, banded together during a campus-wide march to the Board of Trustees meeting on Thursday, Oct. 27.

“One of my classmates showed (the drawing) to me at the end of class (Wednesday) morning, and I was just really shocked to see it,” said Hannah Gaylord, a senior journalism major. “I found out that it had been reported on Oct. 12 and that the school hadn’t sent out any notification about it.”

The protest started promptly at 1 p.m. near the student plaza bus loop. A mass of roughly 200 students looked on, as three FGCU women, who planned the rally the day before, stood on benches and demanded that they get answers to who drew on the board and why the university kept quiet for “two weeks too long.”

Student Government President Thieldens “T” Elneus made an appearance at the protest as well as University President Wilson Bradshaw, Dean of Students Michele Yovanovich, Assistant Dean of the Office of Multicultural and Leadership Development Dyonne Bergeron and other FGCU faculty and staff.

“We are not okay with this,” Bradshaw said. “It does not speak to the type of environment that we are trying to create here at FGCU. It ain’t perfect, y’all. I know that. Don’t ever think that something like this is okay with Florida Gulf Coast University or that it’s okay with this president.”

A protester spoke up from the middle of the crowd, pressuring Bradshaw to answer the question, “If nobody had ever found out about (the drawing) would you have ever had a statement?”

Bradshaw stated that his decision at the time was made on the basis that there was no imminent threat and that the university had stepped up their security.

After the president’s speech, students recited multiple chants, including “Peace, Unity, Culture, Pride,” “The war was started by the KKK, and they don’t care what anybody say” and “Does my color offend you?”

The protest ran though the campus breezeways to the courtyard between Lutgert, Marieb and Edwards Hall. Protesters chanted up to the glass window of the room where the Board of Trustees meeting was being held in Marieb Hall.

The group then walked up the four flights of stairs to create a peaceful, silent sit-in throughout the hallways of the building, just as the BOT members were exiting the room. Shouts of “Why didn’t you do anything about this?” and “You’re just going to be silent?” echoed through the hallways.

The march circled back downstairs and to the library lawn, where a closing speech followed. FGCU students Jeremy Burke-Ingram and Malik J. Hines attended the BOT meeting and informed the protesters that the drawing was the last thing on the BOT members’ minds.

“We sat through this meeting,” Hines said. “There was a lot going on, but I can tell you that this was not an issue on their topic. None of this was brought up.”

Hines handed the megaphone off to Burke-Ingram, who spoke about what the BOT meeting consisted of.

“They were talking about allocating funds and improving metrics to make more money,” Burke-Ingram said. “And, I guess some people who are not even on the board (were) there, so I’m glad that we got this day. So, people from the outside can know what’s going on.”

At the end of the protest, Bergeron shared how proud she and the administration were that students held a peaceful protest and demonstration.

“You see all faculty and staff out here supporting you,” Bergeron said. “Always know that you matter, regardless of what is happening in the world today and in society. Regardless of the elections, regardless of anything that happened, know that we care and you matter.”

“They heard us, so we’re hopeful,” Pongo said. “But, if nothing happens, we’re gonna come back out here. A lot of people were affected, so everyone decided to come out. We knew we were going to have a good turn out.”