The Florida Board of Governors’ inspector general office issued a report on March 28, stating that FGCU had violated state law on two separate occasions.

The investigation was prompted by eight allegations that were first brought to the FGCU Audit Office. State law mandates that any person bringing forth such allegations be deemed a whistle-blower and that the names of whistle-blowers remain confidential.

According to the 81-page report, only two of the eight allegations were sustained.

The first violation occurred when FGCU elected its Faculty Senate president as the Board of Trustees’ vice president, which doesn’t comply with a Board of Governors’ regulation. The second occurrence violated the Florida Sunshine Law, as two trustees had met with the school’s president and provost in a manner that was not public.

At this meeting on July 7, Board of Trustees Chairman Dudley Goodlette, then-Vice Chairman Shawn Felton, Provost Ronald Toll and President Bradshaw spoke about the university’s strategic planning process, as stated in the report. Goodlette said “there was nothing we discussed that we wouldn’t have been more than happy to discuss in an open meeting.” 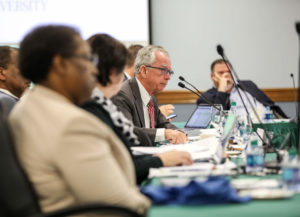 “It was an inadvertent oversight on my part,” Goodlette said. “I should have been aware that talking to the chairman of the strategic planning committee, the president and the provost should have been a noticed meeting.”

To adhere to the state’s Sunshine Law, the basic requirements are that meetings of public boards or commissions must be open to the public; reasonable notice of such meetings must be given; and minutes of the meetings must be taken and promptly recorded.

Since it was concluded that Goodlette and Felton did, in fact, violate Sunshine Law, the Inspector General referred the case to the Florida Department of Law Enforcement as required by the Whistle-Blowers Act, to which the FDLE declined to initiate a criminal investigation.

According to the report, the election of Vice Chairman Felton violated aspects of both BOG Regulation 1.001 as well as Article IX, Section 7, of the Florida Constitution, which requires university boards to select their chair and vice chair from members who were appointed by the governor or the state board. However, Felton serves on the board as a result of being the Faculty Senate’s president. The Senate’s president automatically gets a seat on the board.

The investigation notes, however, that when Felton was elected vice chair, an FGCU regulation was ambiguous in regard to which of the trustees were appointed members.

Felton resigned from his vice chairman position last week, as the Faculty Senate will be electing a new president in two weeks.

The other allegations that were not sustained were that a board member had unilaterally created a task force, board members were trying to influence employment decisions, trustees were not using the proper channels to communicate to employees in regard to the school’s strategic plan, trustees created a conflict of interest by recommending degree programs related to their expertise or employment and shortcutting the degree evaluation process.