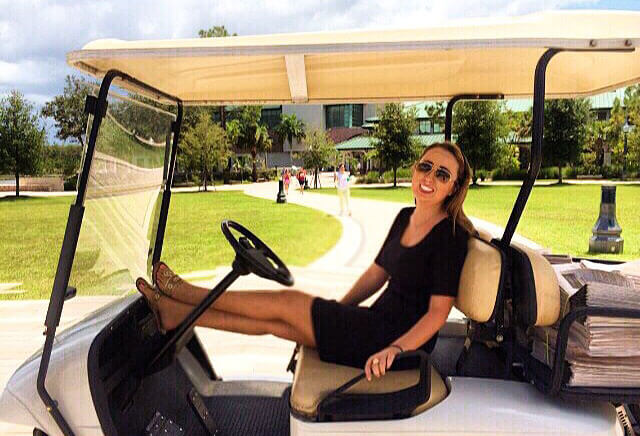 Since 1950, the Society of Professional Journalists has hosted the Green Eyeshade Awards, an annual contest that allows journalists throughout the South to enter print, television, radio and online content to be judged.

On Thursday, June 2, former Eagle News opinion editor Cait Schall was recognized as the Best Columnist in the South, placing first ahead of entrants from two other southern universities, Florida Atlantic University and the University of Georgia at Athens.

“I honestly am completely blown away by this honor,” Schall said. “Last year, when I was ranked the second best columnist in the South, I was excited, but I also secretly set a goal for myself to dig deeper and write even more from the heart.”

Schall submitted five articles in the contest, “Feminism, a movement that drives us further from a goal of equality,” “Damon Wayans weighs in on what the face of a victim looks like,” “When considering mass shootings, we must seek other solutions through awareness,” “Racism, we are all to blame” and “Charlie Hebdo massacre fails to silence free speech.”

“One of the articles I submitted was a piece pertaining to when Damon Wayans called the women in the Bill Cosby scandal unrapeable because they were unattractive,” Schall said. “I decided to talk to as many people on campus about this and let their voices shine through the piece.”

“I worked on improving my voice through my columns and really focused on representing different voices from all sides of a story,” Schall said.