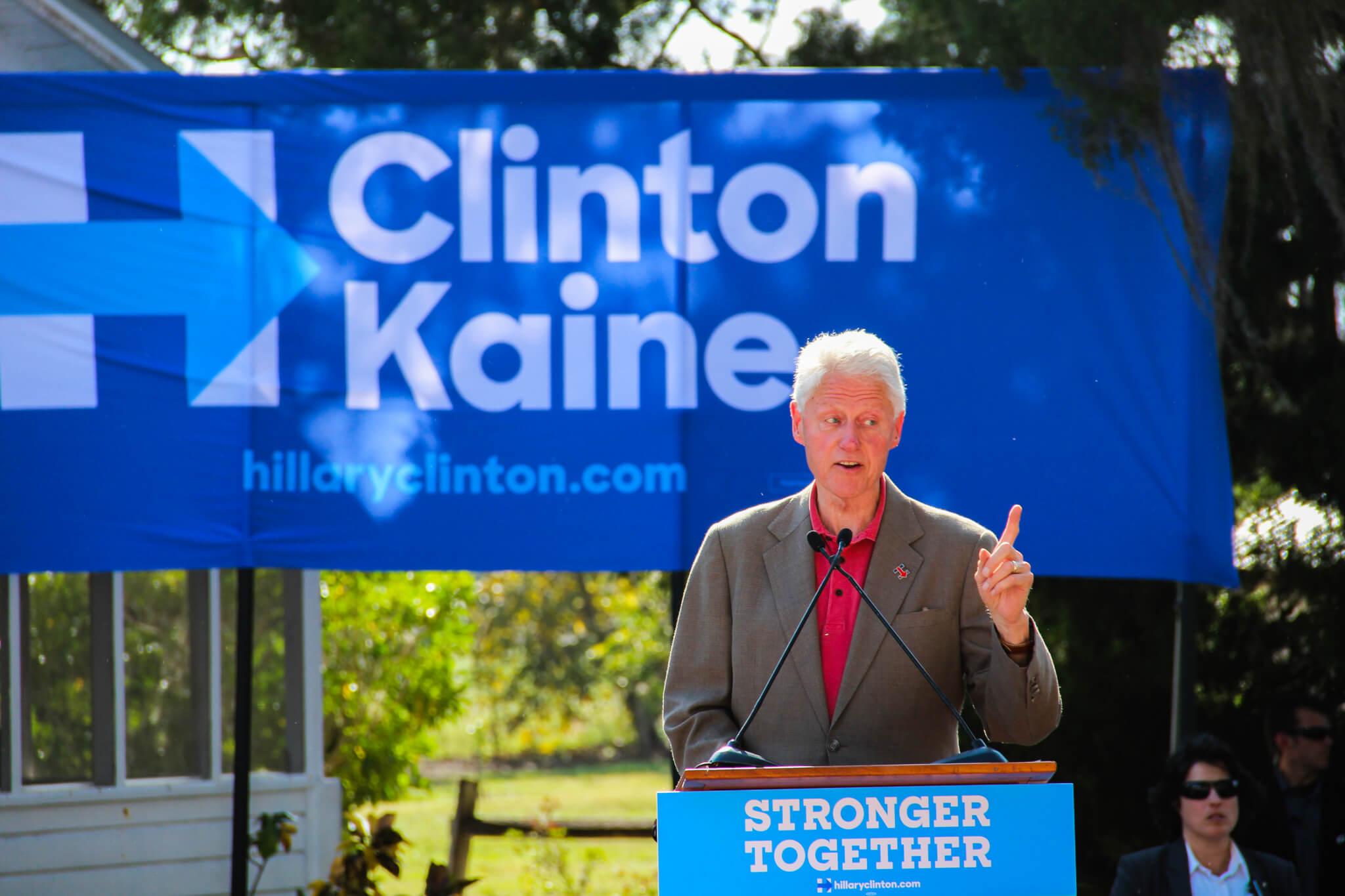 With just seven short days until Election Day, the Clinton-Kaine campaign pulled out all the stops at its latest stop — all without either candidate being present.

Despite the fall date, the heat of Southwest Florida didn’t relent upon the packed crowd, which gathered outside of the Immokalee Pioneer Museum at Roberts Ranch Tuesday afternoon.

Amongst the rally goers, there was a class of primary school students from Immokalee Community School and many off-duty educators, evidenced by the calls of the excited children recognizing their former teachers in the crowd.

The population of ICS is 95 percent Hispanic — mirroring the majority Hispanic community of Immokalee, which means “my home” in Mikasuki language.

Paquette immediately appealed to the crowd, mentioning Clinton’s blue-collar upbringing and decades-long devotion to children, women and minorities. The peppy blonde concluded in Spanish to a surge of cheers.

“Somos una comunidad poderosa,” Paquette said, which translates to “we are a strong community.”

Steve Hemping, the Greater Naples fire commissioner, came up to speak briefly about the importance of Democrat votes, even in “blood red” Collier County.

“In 2008, we delivered 40 percent of the vote for President Obama,” Hemping said. “And, we did that with only 24.3 percent registered Democrats, so we know every vote counts.”

A couple more community leaders, both from immigrant families, spoke briefly in relation to Immokalee’s large migrant worker population and opposing candidate Donald Trump’s comments on immigration reform. Many in the crowd sneered in agreement with the speakers.

Right on time, former president Bill Clinton emerged from the main ranch house, flanked by Secret Service on either side, as he strolled down the front porch steps. Earworm “Happy” by Pharell Williams blared, as Clinton waved to his wife’s supporters.

Already a week into early voting in Florida, Clinton was direct in his points against the competition, particularly his concept of making America great again. Clinton compared the idea to someone promising to make him 20 years old again with the contingency that he would be 20 years old in the time period he had originally been 20 in.

“Somebody says to me, ‘Vote for me, and I’ll make America great again,’” Clinton said. “If you’re my age and you grew up in the South, you know exactly what that means. That means, ‘I’ll give you the economy you had 50 years ago and the society you had … I will move you back up on the social totem pole, and I will move other people down.’”

Before Clinton approached the podium, a rally goer near the press pit was pulled aside and questioned by campaign staff about his insistence on wearing two shirts in the 83-degree weather. He refused to reveal his undershirt but was allowed to stay.

Ten minutes into Clinton’s speech and that very undershirt — which had “Bill Clinton is a rapist” crudely written in permanent marker across the front — was revealed to the crowd, as the man yelled at Clinton, “What about the women you raped?”

The crowd groaned briefly, as security quickly removed the man. Clinton, though, took it as an opportunity to have the crowd clap for the man’s bravery, saying he has a right to express his opinion and encouraging the crowd to not treat him “as they treat us.”

“They have one beef that is legitimate, which is that the white working class is the only group of Americans whose life expectancy is going down,” Clinton said.

He referenced drug addiction, smoking, alcoholism, mental illness and cancer statistics as reasons health professionals give for the issue.

“All that’s true,” Clinton said. “But, that’s just a gobbly gook way of saying that a lot of these people are dying of a broken heart because they get up every day and they look in the mirror and they think they have no power to make tomorrow better for themselves and their children. That is what Hillary has sought to address.”

Clinton went on to speak about the flaws of trickledown economics for the third time in his 45-minute speech before touching on healthcare and gun control. By the end, he brought impending Election Day back to the foreground.

“Turns out, this election,” Clinton said, “more than anything, is about what it means to be an American.”

According to the most recent Bloomberg Politics poll, Trump leads Clinton in the swing state of Florida by two percent, though the sample’s margin of error has been reported as 3.2 percent.