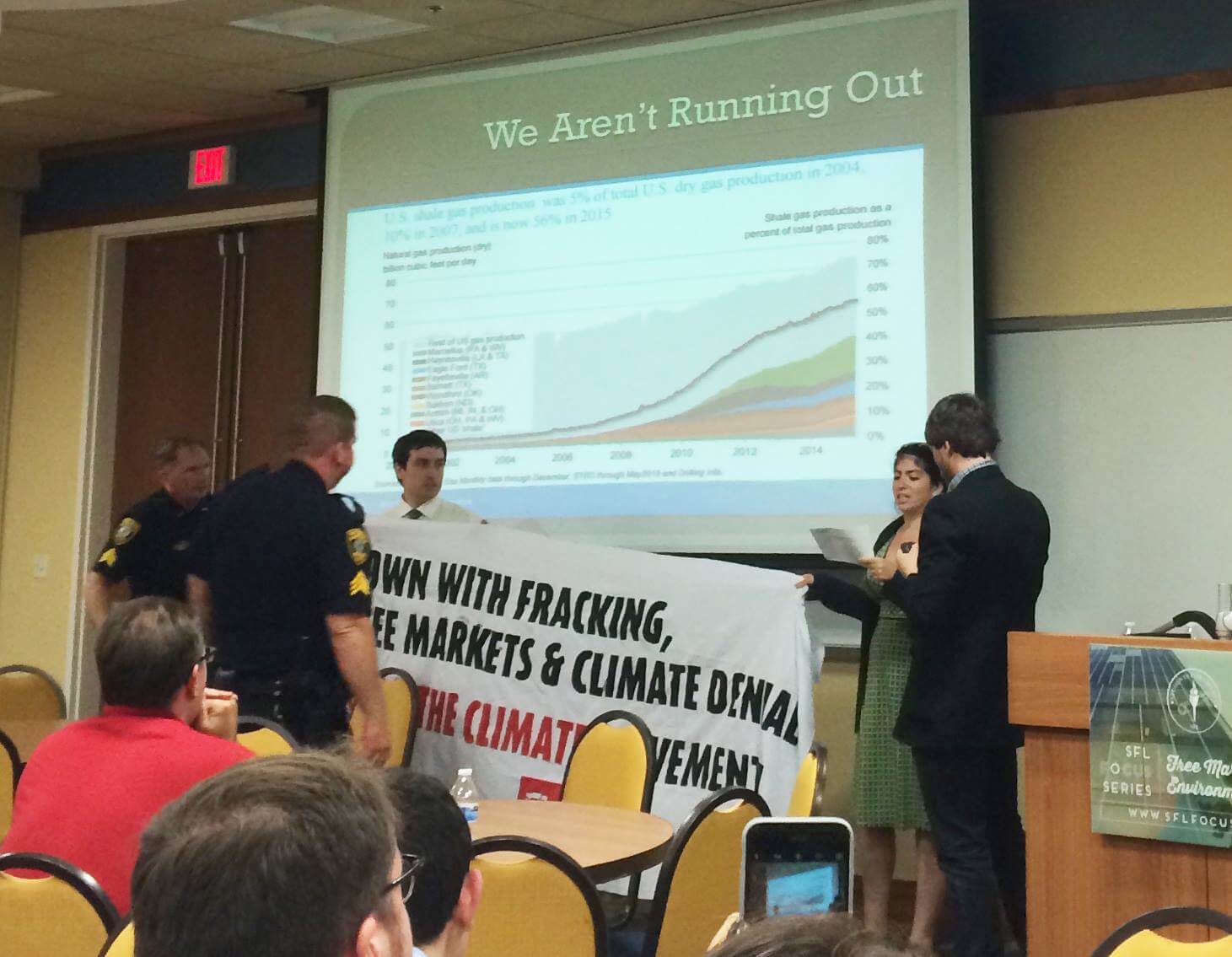 Activists Ellis and Musheyev were asked to leave the room by UPD officers, who were on stand by for the event. (Photo Special to Eagle News.)

The final presentation at FGCU’s Free Market Environmentalism Conference was interrupted Saturday, when two anti-fracking protesters stood at the front of the room. They held a sign that read “Down with fracking, free markets and climate denial.”

“We weren’t expecting protests to the degree they happened,” said Reynolds. “We asked UPD to stick around because there had been a lot of word about something happening.”

ANSWER Coalition activists Bryan Ellis and Juliana Musheyev were escorted out of the Students for Liberty event by UPD officers. (Photo Special to Eagle News.)

Reynolds said two UPD officers checked on the conference several times throughout the day, but the officers stood in the back of the room at around 2 p.m., at the request of one of the speakers who said she had received an email indicating a protest might occur.

Throughout the day, FSU alumnus Daniel Porter asked the speakers questions, and identified himself as an environmentalist. Reynolds said Porter stood up during Orr’s lecture and said, “I’m going to have to stop you right there.” Then, Ellis and Musheyev, who Reynolds said had only entered the room a short time before Orr’s lecture began, stood up and began to speak.

According to the police report, Ellis and Musheyev were asked to leave. When they did not leave on their own, the “individuals were escorted out and attempted to pull away from officers.”

When Ellis pushed back against an officer’s arm, the officer continued to escort him out of the room.

“Climate deniers fund these people,” Ellis said as he was escorted out of the room by an officer.

Ellis told Eagle News he thinks the protest was a success.

“We wanted to send a strong message that these people are promoting corporate interests … and harming real people,” Ellis said.

Ellis and Musheyev are members of an activist group called ANSWER Coalition. According to answercoalition.org, the group opposes war and social injustice.

“ANSWER has played an important role in the fight against racist and religious profiling, in support of immigrant and workers’ rights, and for economic and social justice for all,” the site reads.

Ellis and Musheyev learned about the Free Market Environmentalism conference through UnKoch My Campus, an organization that tries to educate students about the impact that donations from billionaires Charles and David Koch has on higher education.

Ellis said he thinks the UPD officers were unnecessarily forceful with himself and Musheyev.

“The police were really heavy-handed,” Ellis said. “It’s not the right way for them to handle that.”

After Ellis and Musheyev protesters were gone, Porter remained at the event and continued to argue with the speaker, Isaac Orr, about fracking. Ellis said Porter is not a member of ANSWER Coalition or UnKoch My Campus, but he is a member of the activist community.

FSU alumnus and activist Daniel Porter interrupted speaker Isaac Orr during his presentation, prior to the protest. (Photo Special to Eagle News.)

Orr said he would be happy to take questions at the end of his presentation.

Eventually, Porter was asked by UPD to leave the event. Porter did leave.

However, Reynolds said she would have liked to know more about the protesters’ views.

Orr is a research fellow at The Heartland Institute in Illinois, specializing in energy and environmental policy. Orr writes and speaks about hydraulic fracturing and agricultural policy issues, and his articles have been published in The New York Post and the Washington Times.

Reynolds said she was happy with the event and how actively the audience participated.

“I had so many people coming up to me during the day saying all the SFL volunteers were doing such a great job,” Reynolds said. “There was participation from faculty and a lot of students from different backgrounds.”

About 90 people attended the event, but Reynolds estimated only about 30 were there for the protest, which occurred at around 5 p.m., according to the police report. This was FGCU’s second Students for Liberty conference.