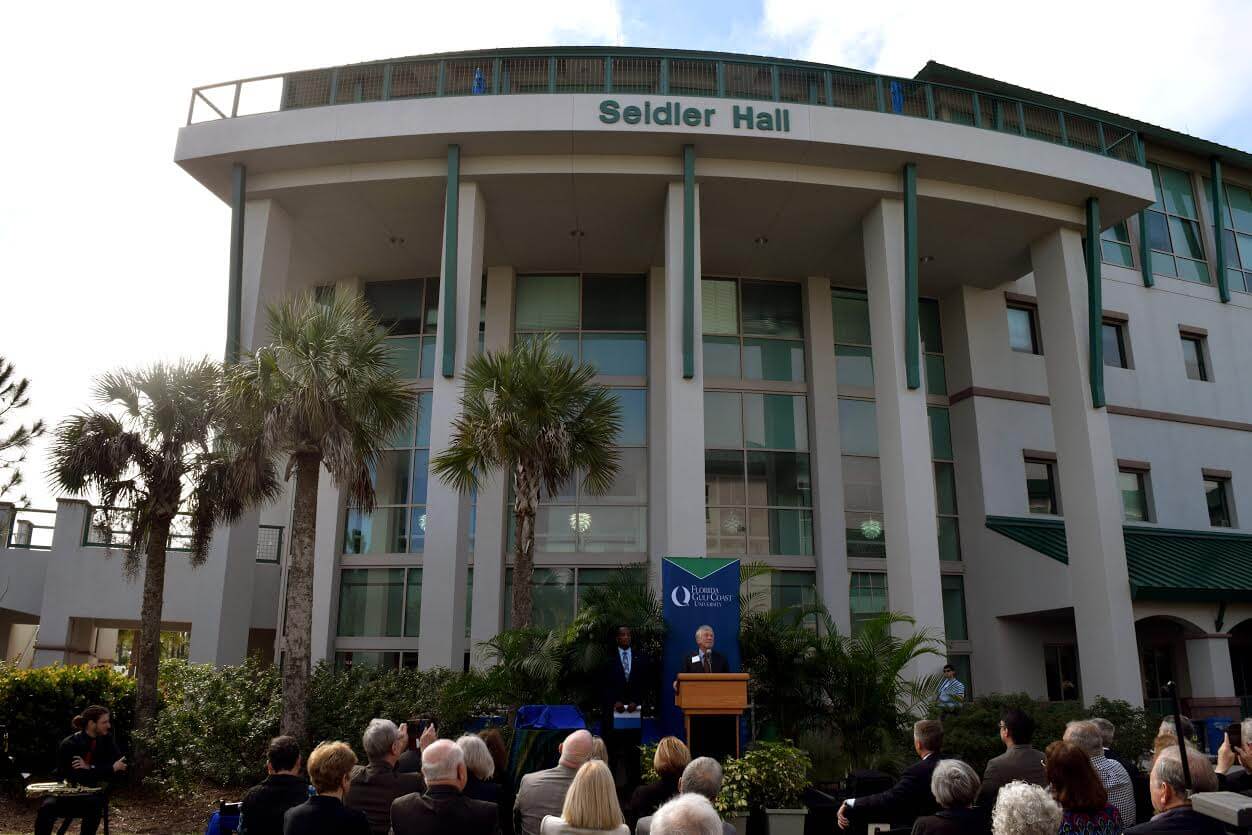 University founders, faculty, students and honored guests were present for an unveiling in front of FGCU’s College of Arts and Sciences. A new name would represent the college and the students who study under it. The Seidler family will now forever have their name cemented in the architecture at FGCU.

FGCU Academic Building 7 has been renamed Seidler Hall in honor of the Seidler family and their commitment to the university.

“I think it sort of caps what we are trying to do with the liberal arts — to encourage them, to create more opportunities for the students, more reasons to major in liberal arts and meet me in Seidler Hall,” Lee Seidler said.

Seidler and his wife Gene and daughter Laurie were also honored for their contribution to the university through the creation of the Seidler Fund, which will benefit professors and students who are part of the College of Arts and Sciences.

“It means we have started funding different scholarships, funding first-generation scholarships, and we will continue to be involved,” Lee Seidler said.

With the help from the Seidler family’s donation, FGCU has reached $87 million toward its $100 million goal for the 20th anniversary of the school.

“It should be a great asset to the whole community, students, as well as all of Lee and Collier County,” Gene Seidler said. “So, we are very thrilled that we get to be here and see this happen.”

The unveiling of the name was initially held in the hall as a private ceremony. The hall’s new name was then publicly unveiled outside of now Seidler Hall to faculty, guests and students in attendance at the ceremony. FGCU President Wilson G. Bradshaw was the first to address the audience at the public ceremony.

A collection about donors Gene and Lee Seidler can be found within the Portico. Lee Seidler has written six books on accounting, while his wife Gene is an educator, whose experience includes 14 years in the Lee County School System. (EN Photo / Rachel Iacovone)

“I often say that athletics and the arts are the two main ways we attract new friends to our incredible university,” Bradshaw said. “Lee and Gene Seidler first became engaged with FGCU through the Bower School of Music and the Arts. It was their love of the arts that sparked their deepest involvement with FGCU.”

Among the audience members was founder Roy McTarnaghan.

“I’m thrilled to be here at the dedication of Seidler Hall,” McTarnaghan said. “It’s wonderful that there are so many giving people who live in the area, who see the advantage in higher education and what their money and interest can bring to a lot of people.”

And, a celebration for the College of Arts and Sciences cannot happen without the dean of the college. Dean Robert Gregerson spoke at the ceremony.

“The name on the building really represents so much more than just that,” Gregerson said. “What this really is is an investment in our students. The Seidler gift is going to make things possible that we weren’t able to do before.”

Gregerson spoke about the investment that the Seidler family’s donation will have on students at the College of Arts and Sciences.

“A lot of the gift goes toward student scholarship and research and creative work,” Gregerson said. “So, helping students do those kinds of creative things — like working with faculty members elbow to elbow, so we can get them to be true scholars.”

An aerial view from Dean’s Balcony of the turnout outside of former Academic Building 7 for the name revealing ceremony. (EN Photo / Rachel Iacovone)

The Seidler family has also donated a work by the late Robert Rauschenberg, a former Captiva resident, through their involvement with Bower School of Music & the Arts. The Seidlers support other related art projects, such as FGCU’s annual 24-Hour Festival.

FGCU student Blake Trochon was surprised that the former Academic Building 7 took as much time as it did to have a name.

“It seems kind of funny how this, one of the largest major buildings, as far as like communications and all the other science professions, is one of the last buildings to be named,” Trochon said. “So, it’s good that they finally gave it to someone that’s deserving.”