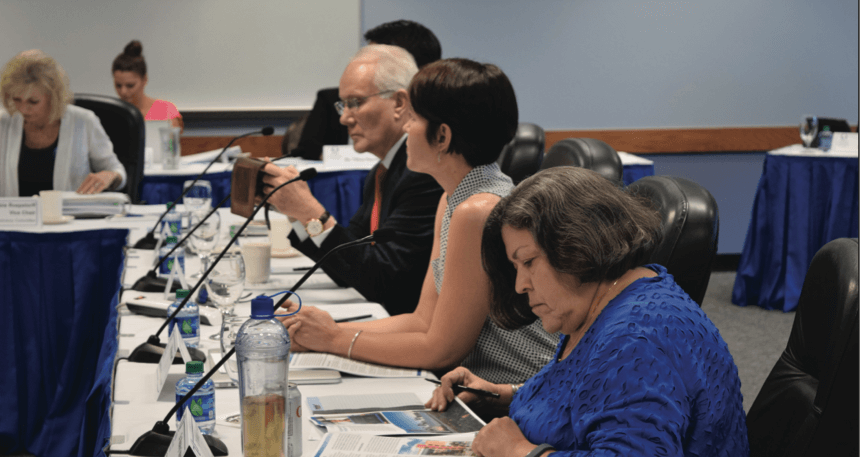 “It’s really wonderful to be able to work with all of you,” said Lucy Leske, a representative of Witt/ Kieffer, the executive search firm that was chosen by the committee.

The survey, published through Survey Monkey, consisted of five questions, which gave participants the opportunity to share their thoughts on the qualifications of the next president of the university. A total of 432 people participated in the survey, which was available on the committee’s website from July 26 through Sept. 1.

“We used three different methods,” Leske said. “We looked at actual numbers of people who responded to different questions. We also did some key themes analysis where we had some staff members hunting through all these responses, and then, we did word cloud analysis that does an actual count of the words that are in the responses and how many times they appear.”

While applicants can emerge from the business world, the last question in the survey, which stated, “What are the qualifications and credentials of the president we need to meet these challenges and aspirations?” gathered a near consensus that Bradshaw’s replacement should have a background in higher education.

After discussing the survey results, the committee reviewed the Leadership Profile, a docu- ment made available for applicants that describes the position as well as the university as a whole.

While committee member and student body president Thieldens Elneus thought that the profile was a great representation of what stu- dents are looking for in the next university president, other members found flaws in the document.

“This is a very lengthy document, and there’s a fair amount of redundancy,” said Madelyn Isaacs, a committee member and counseling professor at the College of Health Professions and Social Work. “Is that considered an advantage?”

Committee chair Ken Smith answered, stating that the profile was originally much longer than the finished product, which is 32 pages long.

“The thing is it was much longer originally, and we cut it down quite a bit,” Smith said. “It’s actually not very long compared to a lot of them.”

Isaacs motioned to present the profile to the Board of Trustees during its next meeting on Tuesday, Sept. 13. Committee member and Board of Governors member Edward Morton seconded the motion, which passed.

One person spoke during public comment during the meeting, Morgan Paine, an associate professor of art in the Bower School of Music and the Arts. Paine brought up the concern of committee members tracking IP addresses of survey participants.

“There was active concern that people’s privacies was comprisable,” Paine said.

Both Smith and Susan Evans, the official spokesperson of the university, answered his question.

“I have not seen the raw data nor do I have any interest in seeing the raw data,” Smith said.

While Smith stated that the committee is over halfway through the process, the majority of its work isn’t over yet. On Wednesday, Oct. 19, Witt/Kieffer will be updating the committee on the responses from advertisements via telephone call. The last day for consideration for applicants will be at midnight on Tuesday, Nov. 8, and on-site interviews with applicants will begin on Thursday, Nov. 17.