GOP voter turnout is “bringing it home” in Lee County

The race for Florida’s U.S. Senate and gubernatorial seat is tight, but republicans are “bringing it home” in Lee County, statistics show.

Of the 196,605 ballots cast, republicans account for nearly 52 percent of the vote – that’s twice as many as democrats at about 27 percent, according to the Lee County Supervisor of Elections. 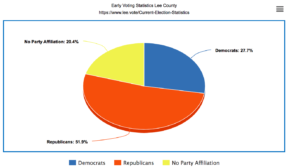 And of 10 early voting locations in the county, GOP turnout has conquered eight, with the exception of Veterans Park Recreation Center in Lehigh Acres and the Fort Myers Regional Library.

Unaffiliated voters account for nearly 20 percent of the ballots.

While the “blue wave” has taken over counties like Broward and Alachua, conservative support has historically dominated Lee County, with nearly 57 percent of the population registered as republican, according to the Florida Division of Elections.

Polls have shown that Florida voters are split on the race for the next governor and U.S. Senator, and high voter turnout plays a role.

Within the next few days, Florida voters will choose between Democratic Mayor of Tallahassee Andrew Gillum and Republican Ron DeSantis for governor and incumbent Democratic U.S. Sen. Bill Nelson and Gov. Rick Scott.

Early voting will continue in Lee County until Saturday, Nov. 3. Check out the link below for polling places near you.