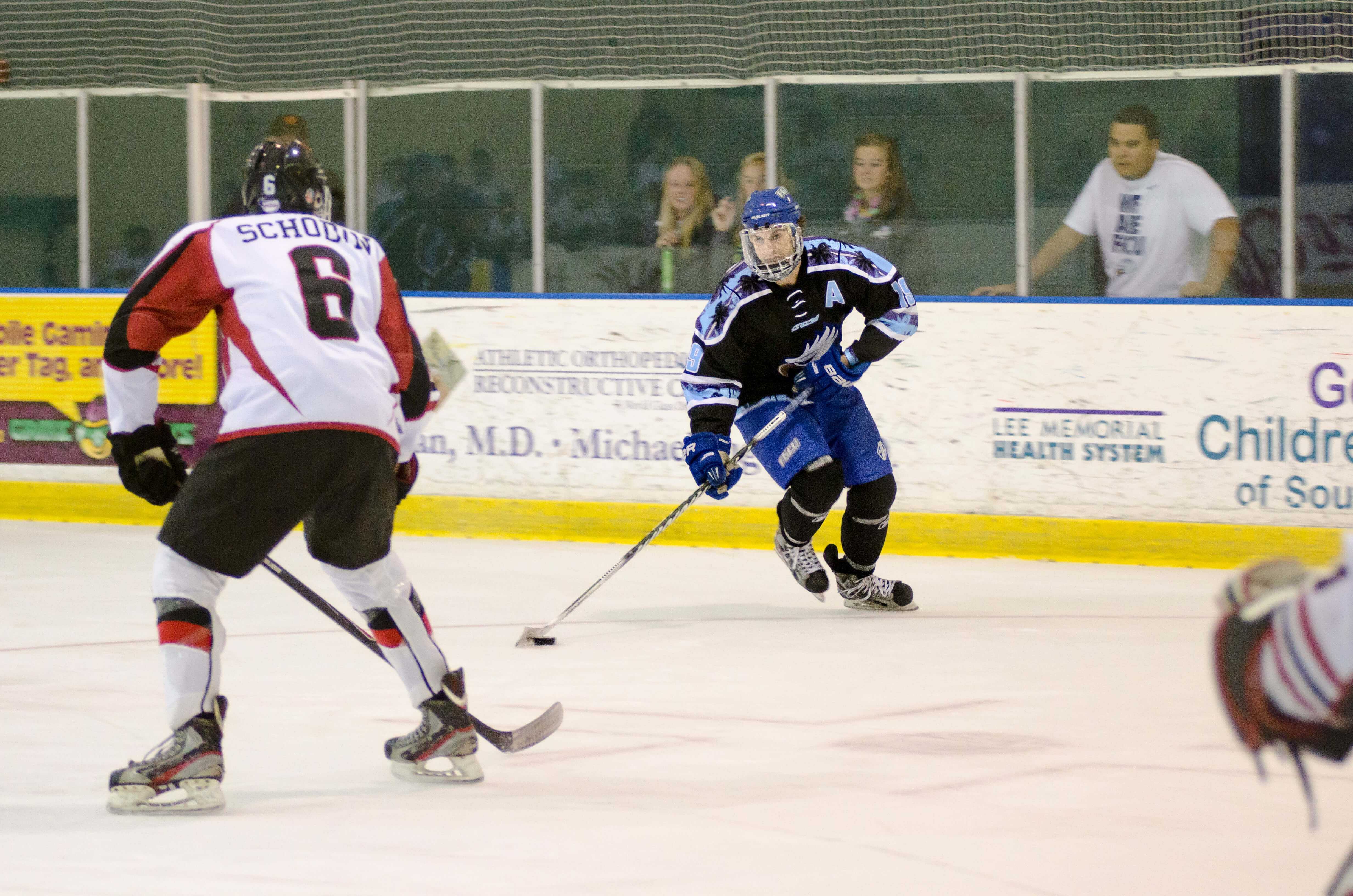 The Florida Gulf Coast University hockey team has been navigating through a tremendous season and a huge part of its success could be attributed to Nick Houser. In the first half of the season, Houser tallied 26 points from 15 goals and 11 assists. He currently holds on to a plus-18 rating and has yet to spend any time in the penalty box.

“Nick brings experience, talent and size and is a very important member of one of our top lines,” coach Bob Brinkworth said. “Fortunately for us he will be here for two years and I think just continue to improve his play.”

Nick was born in Wexford, Pennsylvania, a suburb of Pittsburgh. He has two brothers, Michael and Alex, and a sister, Shannon. Michael is a goaltender for San Antonio, an AHL organization and farm club of the Florida Panthers.

On a suggestion from a family friend, Nick started playing hockey at age 6. He continued on to play Division I hockey at Shady Side Academy Preparatory School. After his time at Shady Side, Nick completed his bachelor’s while playing three years of Division II hockey at the University of Michigan.

Houser is a first-year MBA student here at FGCU, but he came mainly for the hockey program and the opportunity to win a national championship. Nick appreciates his FGCU family and is particularly thankful for the relationships that he has with his teammates.

“I have only been here for four months and have already made some lifelong friends.” Houser said. “The entire school and community have been great in supporting our team this year, and that is really special.”

In the off-season, Houser likes to spend his time at home with his family. Along with relaxing, he spends a lot of time training with Jeremy Hoy at Finish First Sports Performance. Houser will argue that Hoy is one of the best in the business, and he will continue to use Jeremy for preparation in the upcoming season. Houser considers himself somewhat of a health nut, and attributes a part of his success to his health and training habits. Working hard both on and off the ice, along with the support of his linemates can account for a big part of the Eagles continued success.

“I just try and contribute in any way that I can,” Houser said. “Playing with guys like ‘Eche’ [Dan Echeverri] and ‘Mello’ [Michael Chemello] makes my job pretty easy. They are two of the best players in the country, and I am very fortunate to play on their line.”

The Eagles look to continue their winning streak with the help of Houser. His incomparable hockey sense, hard work and devotion to himself and team make him an instrumental asset to the Eagles’ roster.

“He is also one of the leaders in the dressing room and brings a great work ethic to practice and our games,” Brinkworth said.

When Houser is not in class or on the ice, you might be able to find him and his roommate, fellow team member Rob Marlinski, watching shows such as “Vanderpump Rules” and “The Bachelor.” Although, he will admit that they’re girly shows.