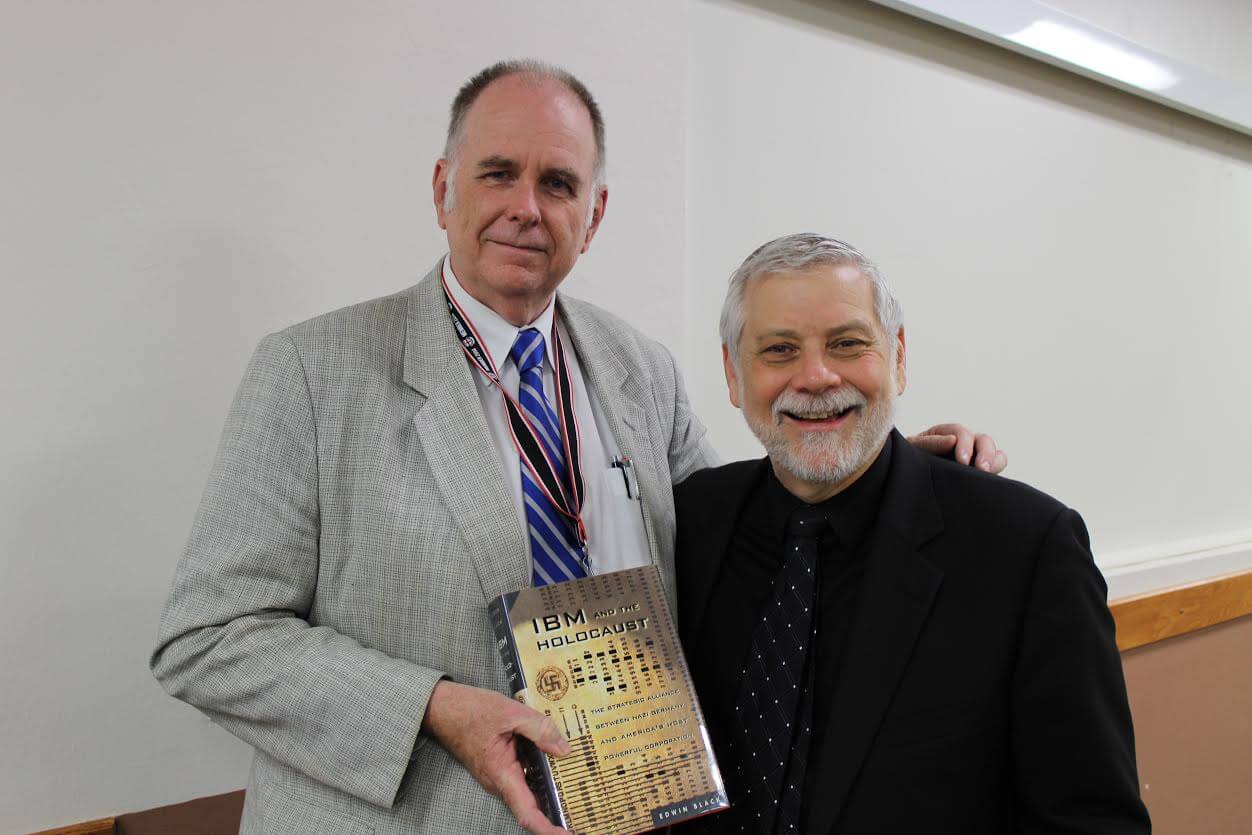 Black stands with Paul Bartrop, an FGCU professor, before the event. Bartrop is also an award-winning author, who focuses on the history of the Holocaust and genocide.

Edwin Black, a New York Times bestselling author and investigative reporter, gave a lecture about IBM and the Holocaust today at FGCU on Feb. 24.

Black took the floor, and he spoke without pause until he was scheduled to end at noon.

“When Hitler came into power, IBM came to the Third Reich and said, ‘We are the solutions company,’” Black said.

Black’s 2001 book, “IBM and the Holocaust,” which has since seen updates published in 2012, was the topic of his presentation. Black is the inaugural author- in-residence for the new program created at the Holocaust Museum & Education Center of Southwest Florida.

Black said he was able to prove that IBM helped to cause the destruction in the Holocaust, what he said was “identification of the Jews, the exclusion from society, the confiscation of their assets, ghettoization, deportation and even extermination.”

He said the usage of IBM’s automated technology that was given to Hitler and the Nazi party resulted in the extermination of six million Jews in the Holocaust.

“I was able to prove conclusively that IBM, under the micromanagement of its president, Thomas J. Watson, micromanaged the co-planning and the organization of all six phases of the Holocaust,” Black said.

With the help of the IBM, Hollerith, punch card, Black said information could be “punched in and tabulated and come out as information technology.”

“Invented by a German-American, Herman Hollerith, it was the people-tracking technology developed for the U.S. Census Bureau in the 19th century, prior to the advent of the punch card,” Black said.

With the way IBM used the punch card during the Holocaust, Black said it was able to gather the information necessary to identify Jews and all the information behind each individual.

“It didn’t matter what religion you practiced,” Black said. “It mattered what was in your blood. IBM came up with the first racial census. They hired tens of thousands of census workers, who went door to door throughout every household in Germany.”

This census was a way to identify the Jews at an efficient rate Black said.

“At the rate of 64 thousand cards per hour, like that, for the first time, they were able to find where all the Jews of Polish extraction in Berlin, who were lawyers, and it wasn’t one census,” Black said.

“Why wasn’t Watson prosecuted after the war?” Schwartz said. “It’s clear with all the evidence that Mr. Black shows that he was certainly instrumental in furthering the Holocaust. “Why wasn’t he in Nuremburg trials? He was certainly guilty.”

The event, which was open to the public, shed light on an investigative work Black has been bringing attention to for more than a decade since his book was published.

Black brings forth evidence that shows connections IBM CEO Thomas J. Watson had with the Nazi Party and the role that IBM played, designing the extermination of Jews in Europe during the Holocaust.

FGCU professor Paul Bartrop, the director of the Center for Judaic, Holocaust and Genocide Studies on campus, welcomed Black to the university. Bartrop is also a published author with great knowledge of the Holocaust.

“The students went away having learned something about the outcomes of corporate decision making and the value and importance of ethics in business,” Bartrop sent in an email.  “It was also an opportunity for the outside community to come onto campus and see that our students are exposed to issues dealing with historical events that have relevance to today.”

People were still filtering into room 247 of the Cohen Center when Sy Stadtmauer, the coordinator for Black, took the floor before Black spoke. Stadtmauer said there is one message they wanted to leave with all of the students and all of those who listen to Black speak.

“We tell them, they should never remain silent,” Stadtmauer said, “If they see an injustice to speak up.”