For the first time in 20 years, FGCU’s International Celebration Week is downsizing.

The event, held annually since the university’s inception by the International Services Office, is usually a school-weeklong event. However, due to recent budget restraints, ICW will be taking place across three days: Wednesday, April 5 through Friday, April 7.

ICW, now in its 20th year, will allow students to explore the cultures of those from Europe, the Americas, Asia and Africa through a variety of activities on the library lawn and the Cohen Center lawn.

Despite a new time constraint, Bingham utilized the time that was available to her advantage.

“We wanted to focus on activities for just three days to make sure that each event is really great, instead of spreading it and getting all disorganized,” Bingham said.

Bingham also said that she wanted the event to be more organized than in years past. 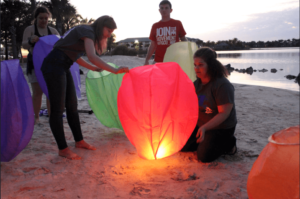 “We tried to be a lot more structured and focused than previous years,” Bingham said.

Bingham said that by having all of the events in the same two locations (the library lawn and the Cohen Center lawn), she has achieved that goal.

A planning committee was put in place earlier this semester; it comprised of Bingham and members of the International Organization (of which Bingham is the advisor).

“We put (that) in place early this semester,” Bingham said.

Bingham is the only representative on the committee from the ISO.

“I work with students, since it is a club event,” she said.

The committee, which is comprised of six to seven members, reached out to every registered student organization on campus, as well as sororities and fraternities for input. During each committee meeting, members invited members of other organizations to attend.

“It just takes time to talk ideas through,” Bingham said. “We all pitch in our ideas, and we see what students want to do, what they’re thinking of doing and how I can help them.”

Bingham also had to work with other departments on campus while planning ICW, including the Office of Student Involvement as well as Catering.

The celebration’s length change isn’t the only different thing about ICW this year.

“Going from a week to three days is different; however, the activities are different,” Bingham said. “I think there’s a lot more arts and crafts this year.”

This year, Painting With a Twist, a chain of art studios that allows participants to paint with friends, will be spread out by the Veteran’s Pavilion. There will also be a tie-dying activity as well as a henna tattoo station, courtesy of the Muslim Student Association.

“There are little things that weren’t there before,” Bingham said. “We’re really trying to focus on celebration. Clubs will be dancing; it will be more lively.”

The International Gala, which closes ICW every year, will be held outdoors for the first time in the event’s history because the Cohen Center ballroom was booked for that night.

“I hope it gets the attention that we’re hoping it does (get),” she said. “It is meant for the students.”

Bingham said that it’s important for students to learn more about different cultures because of the diverse country that FGCU is in.

“That’s just part of the role of a higher institution, to educate others on any global learning opportunity,” Bingham said. “The world out there is so diverse; the country here is so diverse, and so, it’s important for students to understand differences in culture and background.”