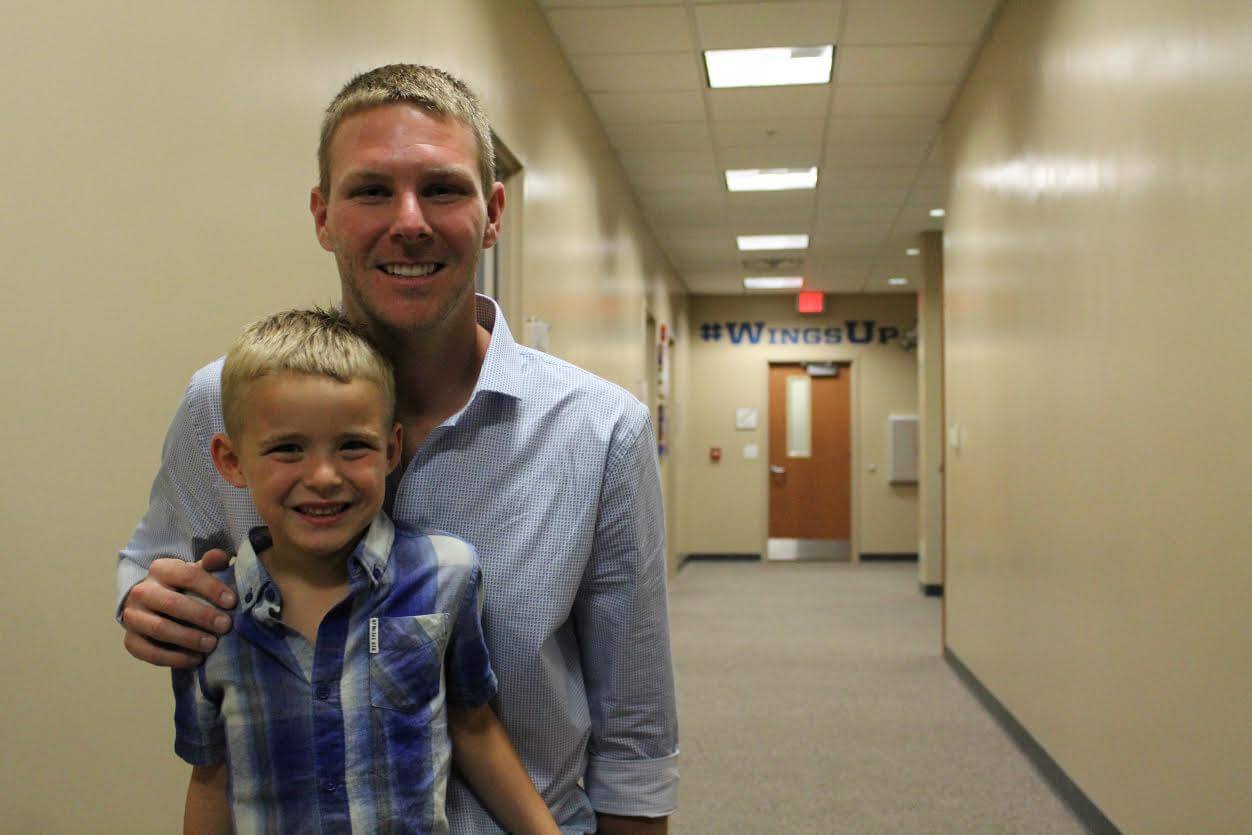 FGCU Alumnus Chris Sale and his son Rylan Sale sat up in the club seat section during the FGCU men's basketball game against USC Upstate. Chris, Rylan and Brianne Sale were their in support of Laces of Love's second annual shoe drive. (EN Photo/ Jack Lowenstein)

On Saturday, Jan. 16 Laces of Love teamed up with Chris and Brianne Sale for its second annual shoe drive during an FGCU basketball doubleheader at Alico Arena.

Fans were encouraged to donate a new pair of shoes to the game to help the organization.

Laces of Love is a nonprofit organization that donates shoes to disadvantaged children in Collier and Lee County.

“Since 1981 I’ve been operating out of my home,” said Jeanne Nealon, the Laces of Love founder and president. “In 2005, we became a non-profit organization, and we have given out 85,000 pairs since then in Collier and Lee County and other places in Southwest Florida.”

After having  its inaugural drive last year where Laces of Love collected 850 new pairs of shoes and about $2,000 dollars in donations, Nealon and volunteers were hoping to surpass their incredible success.

“We definitely surpassed our mark from last year.” said two local teachers who were volunteering at the shoe drive. “We give the shoes to our students, and we love seeing how excited they get when they receive a new pair of shoes. It makes the students feel more confident and have a sense of pride because they have cool shoes that don’t have their toes poking out.”

Fans expressed their support for the organization, bringing, sometimes, five pairs of shoes at a time when they walked up to the table. Laces of Love was very appreciative of fans who were generous donors and often thanked them verbally and with a handshake or a hug.

As an added bonus to the successful night Laces of Love experienced, Chris sale, the Chicago White Sox pitcher and FGCU alumnus, with his wife Brianne Sale and son Rylan Sale, made an appearance to show support for the organization like they have in the past.

“The coolest part of the organization is that they bring awareness to kids needing shoes,”  Brianne Sale said. It’s such a rich area and people don’t notice that kids need shoes. I found out about the organization when I was taking a public relations non-profit class, and we needed work with a local organization, so I saw laces of love, and I thought of my husband and how much we travel, and we felt athletics tied in with shoes, and it worked well with the organization.”

Laces of Love volunteers sit in front of the numerous donations that were collected throughout the afternoon and into the evening. (EN photo/ Jack Lowenstien)

If you would like to volunteer or donate to Laces of Love visit its website, lacesoflove.org, to see how you can make an impact and help out the community.

“My wife is very passionate about Laces of Love,” Chris Sale said. “It’s a great cause, and it’s a big deal kids needing shoes in Southwest Florida. It’s always nice to be able to put smiles on kids’ faces, especially when it hits home.”