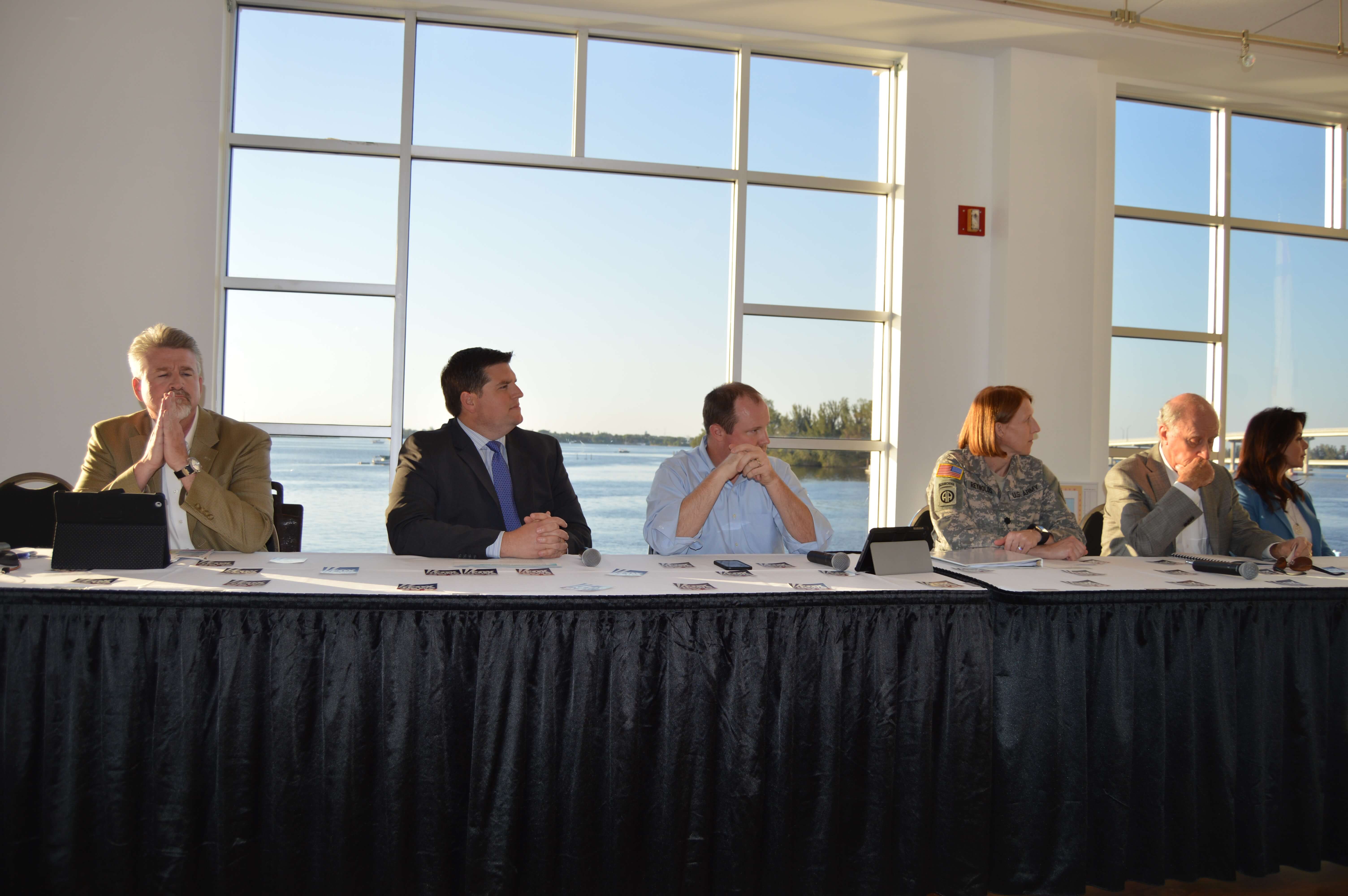 As the sun set on the Caloosahatchee River in downtown Fort Myers, the City Pier Building was still buzzing with activity. Drew Steele, the host of Fox News 92.5 Daybreak radio show, invited five politicians and an army colonel to answer questions from the public on Tuesday. The topic of discussion centered on the growing problem that is the water releases into the Caloosahatchee and St. Lucie Estuary from Lake Okeechobee.

The excess water collecting in Lake Okeechobee is caused by an increase of rain due to the El Nino weather system that moved through the state in January. The Army Corps of Engineers has been releasing water from the lake into the two bodies of water since Friday, Feb. 5 to stop the 90-year-old Herbert Hoover Dike that protects the south end of the lake from breaking and ultimately flooding South Florida, potentially killing three million in the process.

The ecosystem in Southwest Florida has been affected by this decision. Marine life such as oysters and clams are dying, and fish populations like snook, tarpon and redfish are diminishing.

Activists are pushing for state government to gain control of the land that lies directly south of the lake and expand the dike to control the water levels. However, that process has proven difficult because that land is used for sugar production, Florida’s number one agricultural industry.

The panel answered questions regarding purchasing the land south of the lake, the negative effects of the water releases, Amendment 1 and back pumping.

“When we look at where our water comes from and how we’re impacted just at the Caloosahatchee, most of that water comes from north of the lake,” Rep. Matt Caldwell said after Steele asked the panel why the state hasn’t purchased the land south of the lake. “So, if we’re just talking about how we keep water out of the river and out of our estuary is to keep it out of the lake in the first place and to restore those natural features that we’ve changed.”

Steele then asked how bad the damage is and if there are any expected long-term impacts.

“There’s certainly been effects from the large releases of freshwater from Lake Okeechobee into both estuaries,” Army Corps of Engineers Colonel Jennifer Reynolds said.

Sanibel Vice Mayor Mick Denham explained that local tourism is being affected, as well as the fishing industry.

“The fishing captains are talking to us about the lack of opportunities for their customers,” Denham said. “As always, the tourist industry is penalized every time we have a substantial release, and there are numerous incidents on the island where people have said that they are unhappy with the water color and are nervous about going into the water.”

Steele then asked the panel if they had any comments on Rep. Curt Clawson’s Everglades Land Acquisition Act of 2016, which will ultimately allow the federal government to purchase land that will be used for storage and create a new southern flow for water from the lake to collect in the Everglades.

“One of the things I think is most important about all of our efforts is to give credit where credit is due, and Congressman Clawson’s bill to move forward with funding to fix the dike is critical,” Rep. Lizbeth Benacquisto said. “It is one of the most important pieces of the infrastructure puzzle.”

When asked about the Florida Water and Land Conservation Initiative, also known as Amendment 1, the panel was somewhat guarded while answering. Amendment 1 will dedicate 33 percent of net revenue from excise tax on documents to the Land Acquisition Trust Fund, which was created to improve the conservation of wildlife management areas, forests, wetlands, beaches, farms as well as water and drinking water resources.

“I’m not going to suggest who is misleading the public on this question,” Caldwell said.

Caldwell said the main reason the amendment has not been passed is that there are not enough employees to make the conservation projects a reality.

Benacquisto discussed her sponsorship of the Legacy Florida Act, which is closely related to Amendment 1. The act will allow 25 percent of Amendment 1 funds, up to $200 million a year, to assist in restoring the Everglades.

“There are lots of environmental projects across the state, but the ones that matter most to me, to us, are the ones in Southwest Florida,” Benacquisto said.

When asked about back pumping, the process of pumping water into Lake Okeechobee during times of heavy rain, Mitch Hutchcraft, a governing board member of the South Florida Water Management District, said it doesn’t happen that often and is not that harmful to the environment.

“It’s obviously a highly debated topic, so what I’ll do is address the facts,” Hutchcraft said before a chorus of “Who do you work for?” was shouted in unison from several members of the audience.

“Back pumping is not something that happens frequently,” Hutchcraft said. “It’s happened nine times in the last eight years, and it’s been only used for flood protection purposes.”

Steele then asked the politicians if they are concerned with the amount of land that has to be purchased to fix this problem.

“Here in Lee County, you all have purchased 316 million acres of land,” Lee County Commissioner Ryan Hammond said. “You’ve set aside approximately 21 percent of Lee County that will never be developed on. This is something that your commissioners have been working on for years, working really hard to make sure that we use that conservation land.”

Hammond explained that the conserved land in Lee County could be used for water storage.

While there were several members of the audience who disagreed with what the politicians were saying, one man stood out among protesters. John Heim, the president of the Southwest Florida Clean Water Movement, held up a double-sided sign that read “buy the land” and “stop the flow,” throughout the entirety of the meeting, which lasted over an hour.

“We’ve been at it as the Southwest Florida Clean Water Movement for over 20 years,” Heim said. “The reason we’re here today is hoping for the truth rather than the usual dog and pony show we’ve experienced, not only just tonight but the last 20 years.”

Heim posed with the sign that he held for the duration of the meeting. (EN Photo / Rachel Stroecker)

Heim, who is working with FGCU students as well as the fishing club to hold a rally at Veterans Pavilion from 11 a.m. to 2 p.m. Monday, April 18, believes that local politicians aren’t focusing on the problem at hand correctly.

“Two things in this world only exist — either love or fear,” Heim said. “Our leaders are unfortunately leading with fear, and we as activists of clean water and the Southwest Florida community are leading with love for our waterways.”