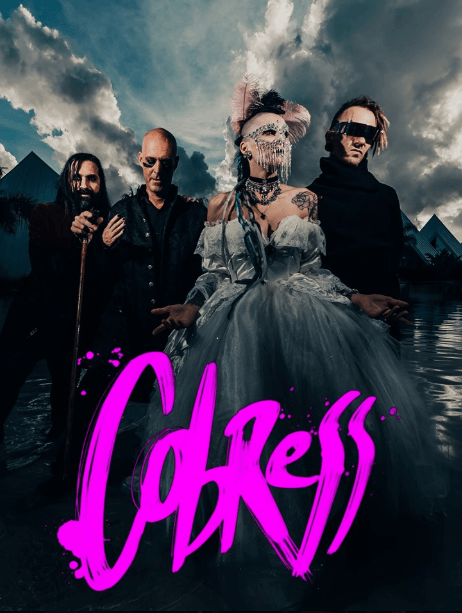 One Southwest Florida (SWFL), cyberpunk band is on a mission to revive the synthwave scene by adding their own unique flair to the genre.

Fort Myers’ act, Cobress, features four SWFL locals who have dubbed their style as “witchwave” with inspiration from gothic rock.

They are best known for their avant-garde costumes and elaborate show presence on stage when performing.

Frankie Orion, guitar/vocals, is the frontwoman of Cobress. She strives to empower her audience not only through her lyrics but with her appearance as well.

“I begin the show in a huge sparkling dress, and by the end, I strip down to a bikini,” said Frankie Orion. “I don’t do it out of vanity; it’s about empowerment. I do it because, after twenty-eight years, I’m learning to love myself and hoping I can inspire other women to love themselves too.”

Colin Orion, bass/vocals, is Frankie’s husband. The duo has been playing side by side in Cobress since the project’s start in 2017.

Cobress’ sound mirrors that of the band New Year’s Day and includes techno influence similar to In This Moment.

“Cobress has brought a different music genre to the collection of very diverse SWFL acts,” said Colin Orion. “Having grown up here, the other musicians are our peers and our friends. Seeing their faces at shows will always be the best part about playing.”

The band’s first release was an EP titled Stage Stomp, which hit streaming platforms in March 2018.

Louie Calavera, drums/triggers, and Xid, guitar/synth/vocals, complete Cobress. The two help give the band the industrial and electronic sound it’s known for.

“We’ve all previously been in projects where the music produced wasn’t quite us,” said Colin Orion. “Not to the fault of anyone else, but maybe just in the spirit of finding yourself over the years. It’s like when you fall in love, and you thought you had loved before, but it was nothing compared to this.”

Colin sang vocals and played bass in the post-hardcore group, Scientist Versus Werewolf, which was active in the mid-2000s.

Frankie remembers seeing Colin perform in that band when she was in her teens. She enjoys being able to share her passion for performing with her husband. Frankie also takes pride in overcoming the unspoken gender boundaries in the rock/grunge scene.

“What I enjoy most about being a woman in the rock scene is being in a project where I get the freedom to express myself not just with sounds and lyrics, but with visuals like fashion too,” said Frankie Orion.

She also trains in the art of polesque, which is a mixture of pole dancing and burlesque. Frankie finds ways to incorporate a sensual show within Cobress’ performances.

Cobress’ most recent gig was a two-night party billed, “The Cobress Neon Halloween Weekend,” celebrating the release of the first chapter of their new album: Neon Royale.

Chapter One: Fire was dropped on Halloween night during night one of the release party at South Street Grill in Naples.

Neon Royale will be released in four separate chapters, each containing songs that will come together to create the whole album.

“We’ve noticed a trend in the music industry where artists releas[e] albums gradually rather than all at once,” said Colin Orion. “Even though we really love the nostalgic feeling of a full album, we also understand the reason for this technique. So we decided to try and do both [and] we wrote the full album as a story separated into chapters.”

The four complete chapters of Neon Royale are Fire, Water, Earth and Air, and they will be released in that order.

Album art for the LP was illustrated by Colin Orion, who aside from being in the band he’s a tattoo artist at Independent Tattoo. Each chapter’s cover will be a panel of an image that will become visible after all four covers are pieced together.

The second chapter of Neon Royale, Chapter Two: Water, is expected to be released sometime in November.

“The people of SWFL are our family,” said Colin Orion. “It’s our job to give them [a show] to the best of our abilities and to always be striving to one-up ourselves for the next time. Of course, the road is great, but there’s no place like home.”