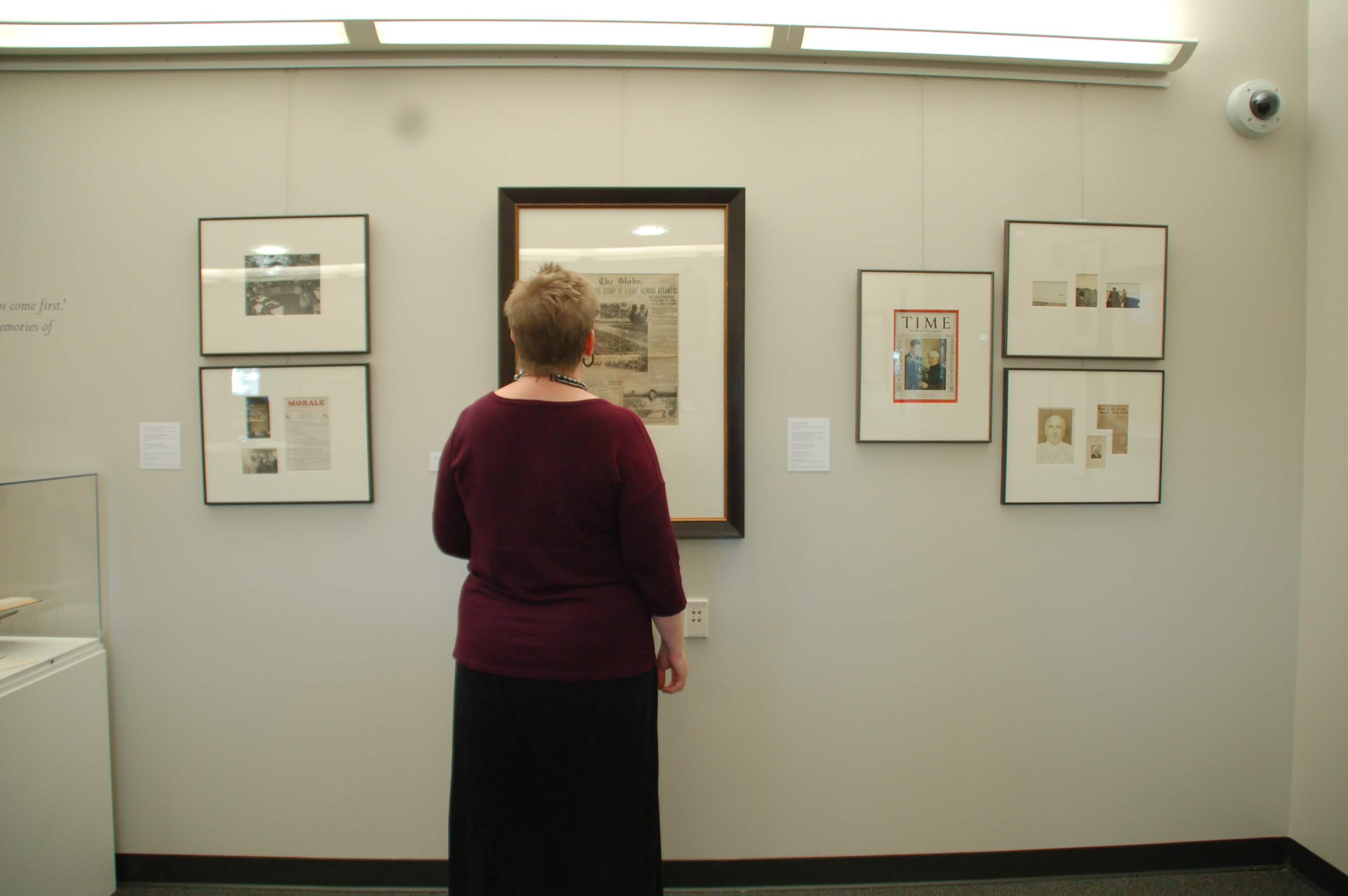 Rebecca Donlan of Library Services admires a newspaper clipping during the opening of the "Uncommon Friends" exhibit in the library room 322. (EN photo/Taylor Crehan)

UFF is a non-for-profit focused on preserving the numerous artifacts Newton left behind after his death in 1999. This exhibit showcases a collection of photographs, personal belongings and newspaper clippings that detail the 20th century entrepreneur’s life in Southwest Florida.

“We just want to thank you for the long-term, 20-plus partnership that the university has enjoyed with the UFF,” said Chris Simoneau, the vice president for University Advancement. “We’re so grateful that we joined with you in working with youth, building up their character and preparing them to join society.”

John Shepard shares a story with the crowd as Fran Myers, John Albion and Gray Davis look on during the opening of the “Uncommon Friends” exhibit in the library room 322. (EN photo/Taylor Crehan)

The exhibit consists of a variety of items related to the life and work of Newton, who penned the book “Uncommon Friends,” a collection of memories about his experiences with Lindbergh, Edison, Ford, Harvey Firestone and award-winning surgeon Dr. Alexis Carrel. From busts to military uniforms to photographs of the five unlikely friends, the exhibit follows Newton from the beginning of his career through his adventures with his famous companions.

“It’s a wonderful exhibit, and I’m delighted that you could all be here to celebrate the opening with us,” said Kathleen Miller, the FGCU Library dean.

The event was catered by the school with small snacks and sandwiches, accompanied by wine.

The grand opening of the exhibit was witnessed by several important figureheads of the university, including Provost Ron Toll. However, FGCU wasn’t the only group represented at the event. Gray Davis, the president of the UFF was in attendance, along with several other representatives from the organization, including Executive Director Angela Melvin.

“What you see on the walls is just a very, very, very small portion of the digitization effort that went on to saving and archiving the records of James Newton,” Davis said.

The foundation was founded in 1993 after benefactors Fran Myers and John Albion decided to start a collection of Newton’s belongings after hearing about Newton’s attempt to donate his items to Yale University. The two jumped at the chance to preserve local history here in Fort Myers.

Myers met Newton when he won an award for person of the year from the Board of County Commissioners and wondered what he would do with “all of this stuff.”

“John took it to the bullhorn and got it here,” Myers said. “We’re just really proud to be a part of this.”

For Albion, the exhibit means more than just pictures and knick-knacks.

“It’s rather amazing that we’re recognizing the friend of the uncommon friends because that’s the special link, and everyone’s been such great friends from there,” Albion said.

John Shepard, the officer of UFF and a personal friend of Newton, remembers Newton as a great man with an even greater spirit.